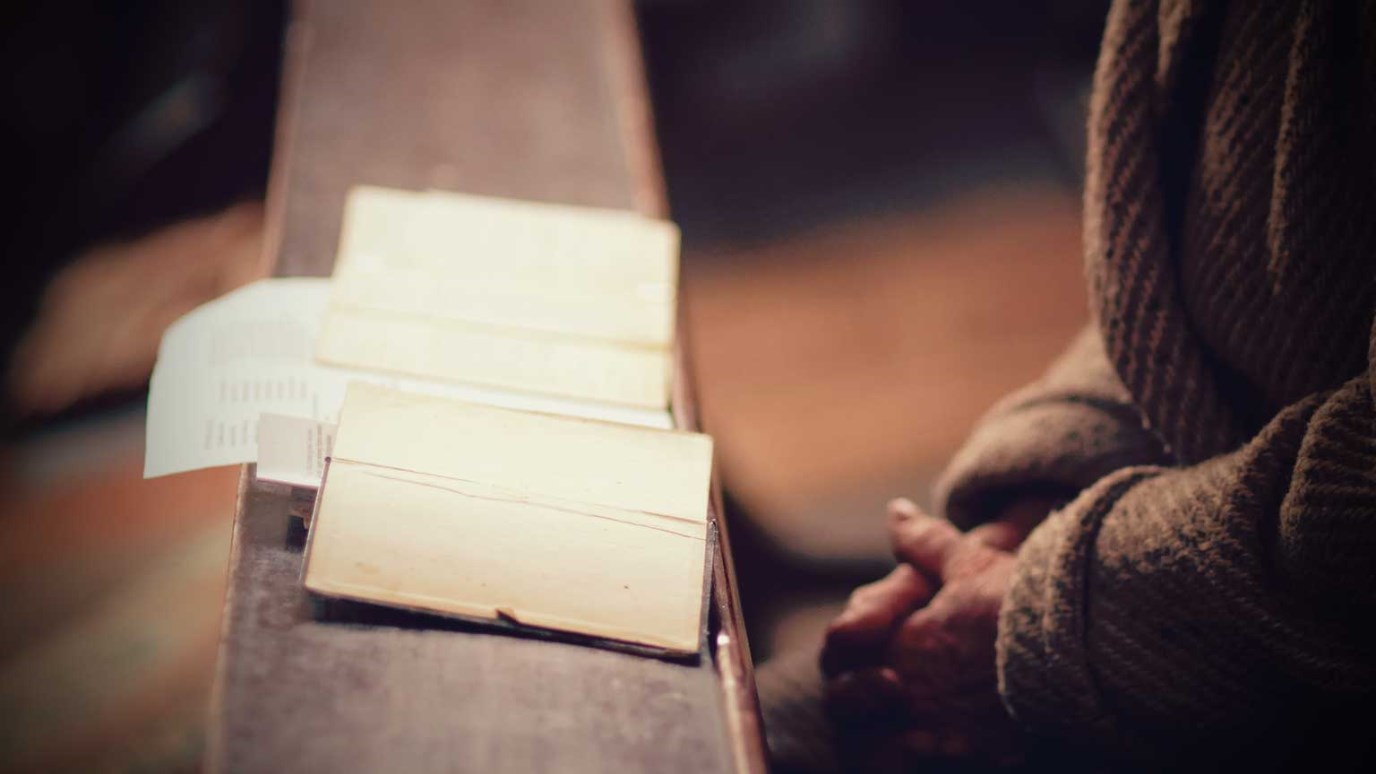 True life comes not when we stand near to Jesus Christ and Him crucified, but when we cling unashamedly to His cross and lift it high for all the world to see.

When my husband Eric was in his early twenties, he went on a mission trip to inner city New Orleans. One night his team decided to do street evangelism on Bourbon Street near the time of Mardi Gras, holding up a large wooden cross as they preached and handed out tracts. Eric was new to street evangelism and reluctant to participate. He felt there were better ways to share the gospel, ways that wouldn't make him look quite so foolish. As the other missionaries set up the large wooden cross amid a sea of drunken partiers, Eric kept his distance.

As long as he remained a safe distance away from the cross, he could pretend that he wasn't really with those "kooky Christians" who were preaching about Jesus amid a mocking crowd. He stood there awkwardly, halfway between the swarm of noisy street revelers and the group of missionaries with the wooden cross. He didn't want to be part of the wild street crowd. But he also didn't want to be part of the radical team of missionaries who were being ridiculed and scorned by everyone around them. So he remained halfway between the two, feeling miserable.

"Hey, Eric!" one of his team members motioned to him. "Can you come here and hold up the cross?"

He froze on the spot. He'd been trying to stay as far away from the wooden cross as possible. How could he swallow his pride enough to hold it up in the middle of a crowded, noisy street?

Despite his hesitation, he suddenly found himself walking toward the wooden cross and placing his hand on it. The moment that he grabbed onto the cross and faced the partiers, he felt a strange emotion overtake him. Pure joy. A sense of radiant happiness flooded through him, and he couldn't keep a smile from spreading across his face. Just a few minutes earlier, he'd been safe from public mockery, but he was restless and miserable. Now, though the object of ridicule, he felt excited and alive.

As Eric held onto the cross, he pondered the dramatic transformation that had taken place within his soul. There was no longer any question where he stood. He had crossed the line and chosen his side. Everyone who saw him knew he was with Jesus. They laughed, they cursed, they spit, and they threw beer. They hated him because of the cross that he was holding—and he'd never been happier. As he clung to the cross, only one thing seemed important: standing boldly for the glory of his precious King.

An hour later when another missionary asked for a turn holding the cross, Eric reluctantly handed it off. He would have held that cross all night if he'd been able to. He had stumbled upon the secret to vibrant Christianity—not merely standing near the cross, but clinging to it and gladly bearing its shame.

That story challenged me to ask some poignant questions.

In Hebrews 11, Paul describes how Moses willingly chose to forgo the prestige and ease of Pharaoh's palace, choosing to embrace the reproach of Christ rather than to "enjoy the passing pleasures of sin" (Heb. 11:24–25).

How can we avoid mediocre Christianity? We must stop waffling somewhere between the world and the cross. Many of us embrace Christianity only so far as it does not threaten our comforts or popularity. But true set-apartness means clinging to the cross and lifting it high for the world to see. It means living in such a way that leaves no questions as to where our true loyalties lie. We may not be called to hold a large wooden cross in public, but when people observe our lives, they should see us unashamedly embracing the cross and boldly declaring, "I'm with Him!"

This kind of "all in for Jesus" commitment doesn't happen through self-effort.  Instead, like Mary of Bethany who willingly poured out her most precious possession upon the feet of Jesus, true devotion to Christ can only flow through a heart of genuine love and gratitude toward Him (see Matt. 26:7–8).  It's an attitude that says, "He gave everything for me; the least I can do is give everything for Him!"

But just as some criticized Mary's "extreme" devotion to Christ, they may treat us with the same contempt as we stand unflinchingly with Him. The cross of Jesus Christ, as the old hymn says, is an "emblem of suffering and shame." But it is also the place of the most glorious redemption in history.

Because of the cross, we have passed from despair to hope, from defeat to victory, and from death to everlasting life. To become the set-apart women He has called us to be, we cannot merely take the benefits of the cross; we must also be willing to bear its reproach.

True life comes not when we stand near to Jesus Christ and Him crucified, but when we cling unashamedly to His cross and lift it high for all the world to see.

Are you ready to take hold of that splintery wood?