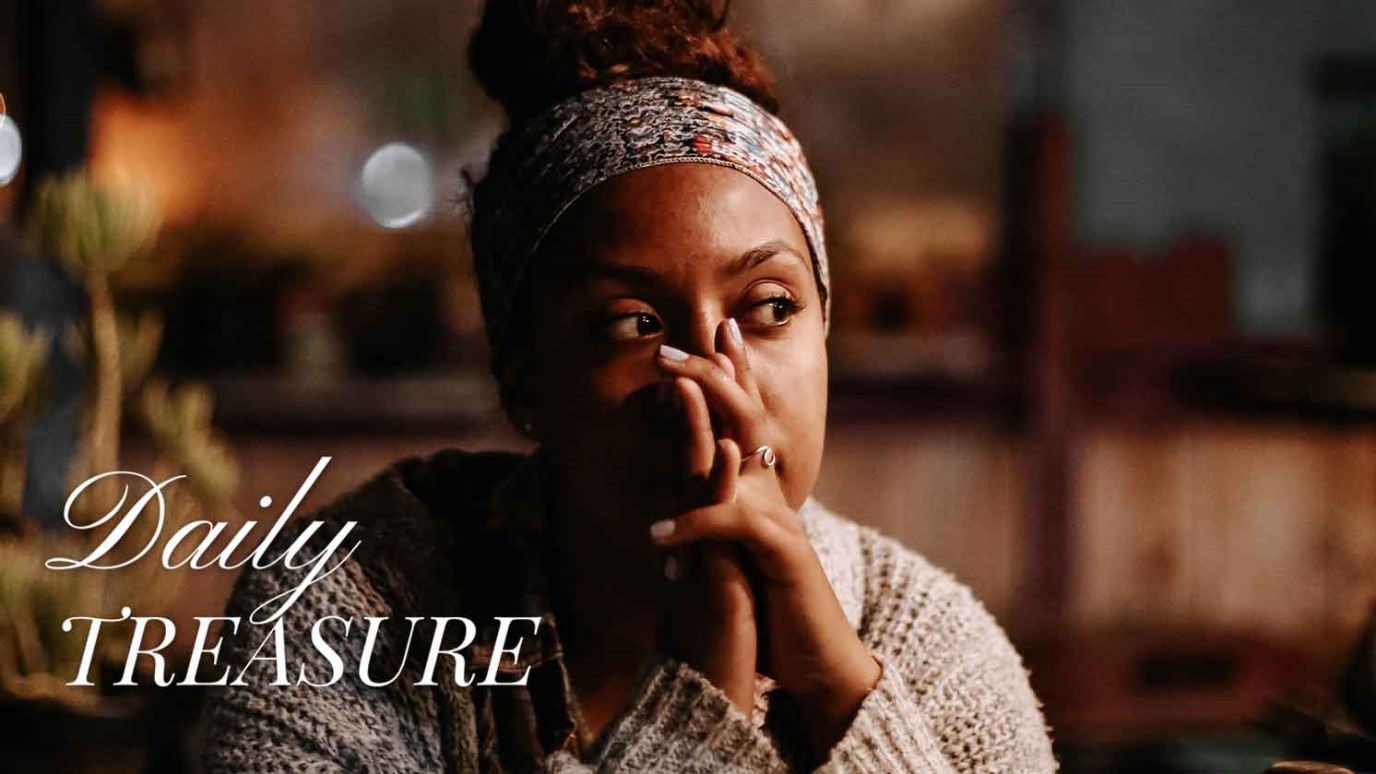 Are you asking that question of “Who are you God?” Let Hagar teach you, when all seems lost, cry out to our God Who sees.

She gave this name to the Lord who spoke to her: “You are the God who sees me,” for she said, “I have now seen the One who sees me.”

Yesterday, I closed the devotional with these questions:

And in the midst of it all is that cry of Who:

“Who is this God Who has asked me to trust Him,

Who promises to be with me and care for me and redeem and restore me?

Now that all this has happened, how can I trust Him?

And where is He anyway?

And why isn’t He doing anything to help me.

Is God even there?”

I met a gentleman with those kind of questions in an unusual place—the first-class section of an airplane. As we ate, the gentleman made a little joke about the plastic knives and forks. He had a noticeable British accent. I barely nodded at him. I didn’t want to engage.

After dinner, we both went back to work, but the ice had been broken. My seatmate glanced over at my open Bible. “Are you a Christian?” My immediate unspoken response was…Oh no. He’s a Christian too and he’s going to want to talk about spiritual things, and I just don’t have time… I just glanced at him and said, “Yes, I am.” “Really?” he said. “I’m an agnostic.”

I quickly found out that I was talking to a brilliant and wealthy man—a scientist by background, the president of one of the world’s largest pharmaceutical companies. He wanted to talk about faith, and I kept thinking, this is such a joke, God, me talking faith with a brilliant agnostic scientist. I have nothing to offer this guy. We started talking about angels and creation and why I believe that God really cares about who we are. He told me he was a lapsed Catholic, and at some point of the conversation, I sensed the Holy Spirit saying to me, take him back to the time when he was a young boy, and ask him when he stopped believing that God saw him.

So I asked him that question, and he started telling me this story about being twelve years old, his mother dying, and a priest trying to comfort him by saying. “God is taking your mother because He needs her more than you do.”  This gentleman couldn’t go any further because he had started to shake and sob uncontrollably. He couldn’t speak. Neither could I. I thought he was having a heart attack or a nervous breakdown. Finally he excused himself and went to the restroom. I just sat there, stunned, until he returned to his seat and he apologized for losing control.

“No,” he said. “You don’t understand. That’s the first time I’ve cried in twenty-eight years.”

I said, “Ah. You see, that’s the point that you believed God betrayed you. You believed God took your mother.” We talked a little more, and he began to weep again, and again he had to retreat to the bathroom. He just couldn’t control his emotions. He had kept everything under wraps for so long, but now it was breaking through. He was reliving that moment that changed everything—when the bottom was falling out of his life and someone told him God was the reason for his pain.

He was gone for a long time, and while he was gone I wondered about how that moment of trauma had touched that boy. You see, I’m convinced that it’s not the trauma itself that does the most damage in our lives. It’s the false conclusions we draw about the God who sees us that leave the biggest scars.  It’s the mistaken belief that God doesn’t care or isn’t in control or actually sets out to hurt us. Believing that is just too painful. It feels safer to believe God doesn’t see us—or that He doesn’t even exist.

My new friend finally returned from his seat, his handsome face bearing evidence of his emotional breakdown. That’s when I told him the priest was absolutely wrong. I told him, “God saw you then, and He sees you now. He would never have taken a boy’s mother away just because He ‘needed her in heaven’.”

From there our conversation became far ranging. He wanted to know about what the Bible had to say about the problem of evil. What about free will? Why do the innocent suffer?  I showed him places in my Bible I had marked—scriptures about God and His persistent love for us, about Jesus, who understood our pain and died for us. We talked for the whole duration of that two and a half-hour flight, with me flipping through the Bible and my new friend weeping intermittently.

As we were landing, I said, “I never really introduced myself. My name’s Tammy.” He said his name was Ian, and he handed me his business card.

As we waited for the signal to deplane, I remembered he’d mentioned he was married. “Is your wife agnostic as well?” I asked. “No,” he said. “She’s a faith person. She doesn’t go to church, but she goes to something called a Bible study. In fact, I recognized the author’s name on that book you’re reading, because my wife goes to the same kind of study.”

I just had to laugh at that. If his wife went to a Bible study, surely that group of women has been praying for just such an encounter in Ian’s life, and maybe there was a way I could take it just a step further. “You know, Ian, there’s a book I think you’d enjoy. It was written by a very intelligent man, an Oxford professor, who was an atheist but ended up becoming a Christian. If I send you one of his books, would you promise me you’d read it? It’s C. S. Lewis’s Mere Christianity.” If you send it to me,” he said, “I’ll read it.”

After I got home I dug up a copy of Mere Christianity and sent it to the address on his business card. Ian emailed me that he found it to be a very “profound read.” We emailed back and forth a few times, then lost track of each other, but that remarkable encounter has stuck in my mind over the years.

It’s a beautiful example of the way the God who sees us orchestrates unexpected and healing encounters. God saw me, put me next to Ian so he could see my Bible study book, and then nudged me to see the pain beneath a very polished and prosperous exterior. That encounter became a catalyst for Ian to see that his little boy assumptions about God might need to be reconsidered. I’ve prayed many times that somehow, out of that encounter, Ian was able to finally see the God Who saw him.

Ian’s story shows how trauma can affect our view of God—and how a misconception about God can rob us of the comfort and help we need during hard times. I almost want to weep when I think how that priest’s misguided statements about God had kept Ian from turning to God when he needed Him so desperately.

That can happen so easily, especially in times of trial. Even those of us who know God can jump to wrong conclusions about His character and intentions for us. If we let that happen, we can miss what He’s doing in our lives.

That happened to Hagar back in Genesis. After she met God in the wilderness, after she gave Him the name El-Roi, she returned to Abraham’s camp and bore her son, Ishmael. In the midst of it all is that cry of Who: “Who is this God Who has asked me to trust Him, Who promises to be with me and care for me and redeem and restore me? Now that all this has happened, how can I trust Him? Where is He anyway? Why isn’t He doing anything to help me? Is God even there?”

Then Sarah bore Isaac, and tensions continued between the two women and the two boys as well. When Sarah told Abraham he had to choose, he gave Hagar and Ishmael a little food and water and sent them out into the wilderness. Rejected and alone, they wandered aimlessly until their food and water ran out. Then Hagar placed her dying son in the shade of a bush and moved a little bit away because she couldn’t bear to watch. She seemed to have completely forgotten about El-Roi.

El-Roi hadn’t forgotten about her—and He sent another angel to tell her so.

When the water in the skin was gone, she put the child under one of the bushes.  Then she went and sat down opposite him a good way off, about the distance of a bowshot, for she said, “Let me not look on the death of the child.” And as she sat opposite him, she lifted up her voice and wept.  And God heard the voice of the boy, and the angel of God called to Hagar from heaven and said to her, “What troubles you, Hagar? Fear not, for God has heard the voice of the boy where he is.  Up! Lift up the boy, and hold him fast with your hand, for I will make him into a great nation.”

What she needed for life—a well—was literally just around the corner.

Then God opened her eyes and she saw a well of water. So she went and filled the skin with water and gave the boy a drink. God was with the boy as he grew up. He lived in the desert and became an archer. While he was living in the Desert of Paran, his mother got a wife for him from Egypt.

No matter what her trauma, God’s promises for a future and a hope were still in effect for Hagar and her son. If she would just trust the God Who saw her, He would provide for her, protect her, and restore her. He was already doing it, even when she couldn’t see.

Are you asking that question of “Who are you God?” Let Hagar teach you, when all seems lost, cry out to our God Who sees.

Adapted from:  The God Who Sees You: Look to Him When You Feel Discouraged, Forgotten, or Invisible by Tammy Maltby; David C. Cook, 2012