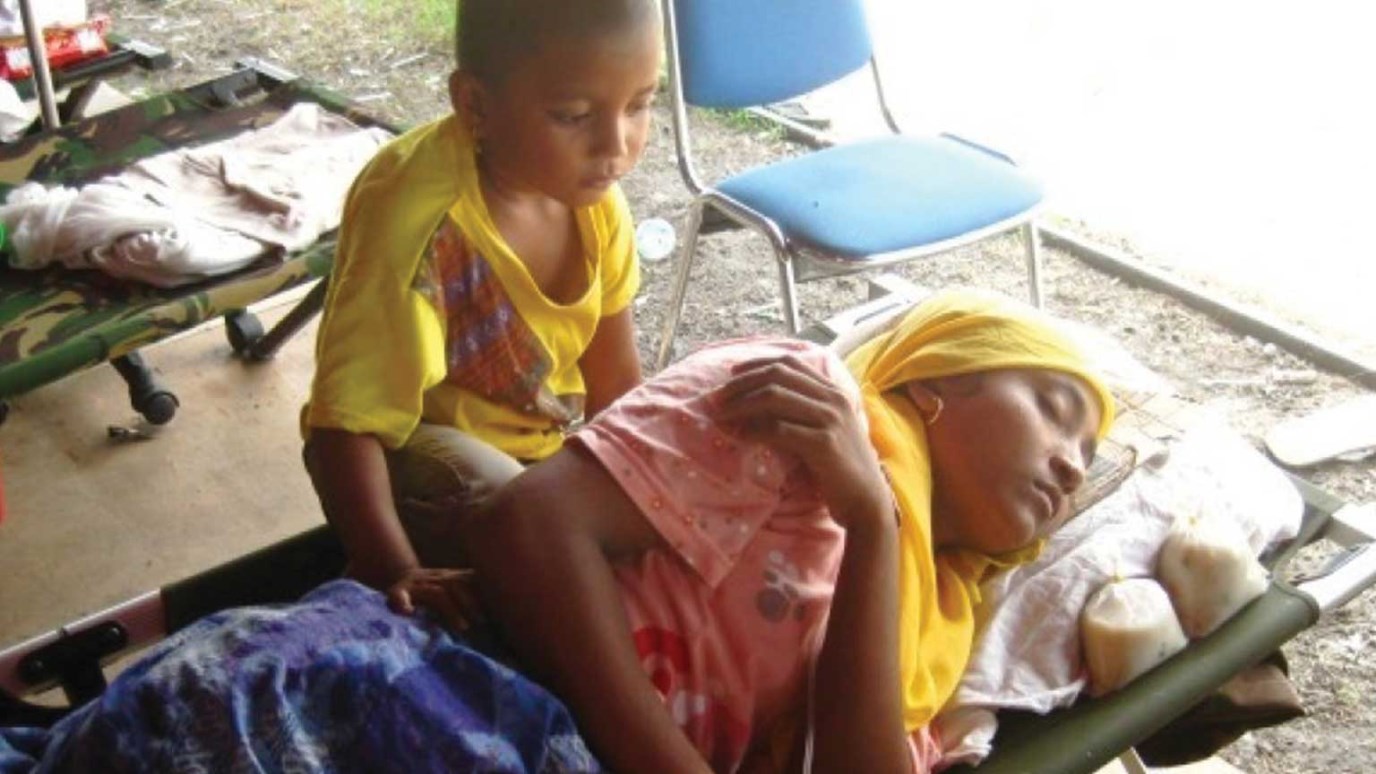 Bibi, 4, keeps watch by her mother, Mimi, at a shelter in Aceh, Indonesia. They are among 1,200 boat people who were brought ashore after 12 weeks adrift in the Bay of Bengal.

Bibi, 4, sneaks a peek from behind her mother's shoulder and then looks away shyly, without saying a word. The two share a single canvas cot in a health shelter. Four other patients lie in cots nearby, under a tarpaulin cover.

Bibi is the only child. But Bibi isn’t sick. She lies next to her mother to keep a close eye on her. Her mom hasn’t eaten in several days; she’s too heartbroken.

Bibi and her mother arrived six weeks before in Aceh, Indonesia, on the coast of the island of Sumatra. The family of three fled a life of deprivation and exclusion as members of the Muslim minority in Myanmar’s Rakhine state.  They floated in a boat on the Bay of Bengal for 12 weeks. Now it’s just the two of them.

Not long after the family arrived, Bibi’s younger brother – just 3 – died from an infected, untreated wound.

The local Acehnese community buried the little boy in a village cemetery. No one in his family was strong enough to witness the burial.

"She can be healthy if she chooses to eat. But she refuses to eat, and we don't know what to do when she does that,” says one of the health workers in the shelter. “We can only help by giving an infused bottle [of liquid nutrients] to prevent dehydration, but she still needs to eat.”

Last night, Mimi passed out after not eating for several days. Bibi, worried, joined her mother as she was taken to the makeshift clinic. She turned her back on the toys and books available at the shelter to stay beside her mom.

As she watches her mother lie in the cot with an intravenous infusion attached to her hand, Bibi seems afraid to hug Mimi. She just lies next to her, listening to a neighbor trying to persuade Mimi to eat.

Finally, when Mimi agrees to take a few spoons of plain rice, Bibi smiles. It’s not much, but it’s a step in the right direction.

A shelter in Aceh isn’t where Bibi and her mother want to be. Bibi's father works in Malaysia. When Mimi and the children escaped on the boat, they left with the hope of being reunited in Malaysia.

Along with other “boat people” they were denied entry to Malaysia and abandoned on the sea. What was supposed to be a one-month trip extended to two months.

They don't know when, how, and if they will be able to gather as a family again.

They were turned away from other countries, but in May Acehnese fishermen rescued more than 1,000 Myanmar asylum-seekers. Indonesian government officials agreed to accommodate them in a shelter for one year. Communication is difficult between asylum seekers and people from their host communities in Aceh. Most of the asylum seekers speak only Burmese, the language of Myanmar, and few locals can translate.

There are about 1,200 refugees and migrants staying in Aceh's temporary shelters. At least 200 of the refugees are children. Government and aid agencies are taking care of basic needs of the asylum-seekers, but more must be done to assure living conditions are safe and hygienic, especially for children. World Vision's assessment of the shelters showed poor sanitary conditions that could lead to health problems.

World Vision is working with other member organizations in the Humanitarian Forum Indonesia to assist the asylum-seekers in Aceh. Among their actions are distributing personal hygiene kits, and promoting healthy practices, including nutritious feeding for young children and infants.