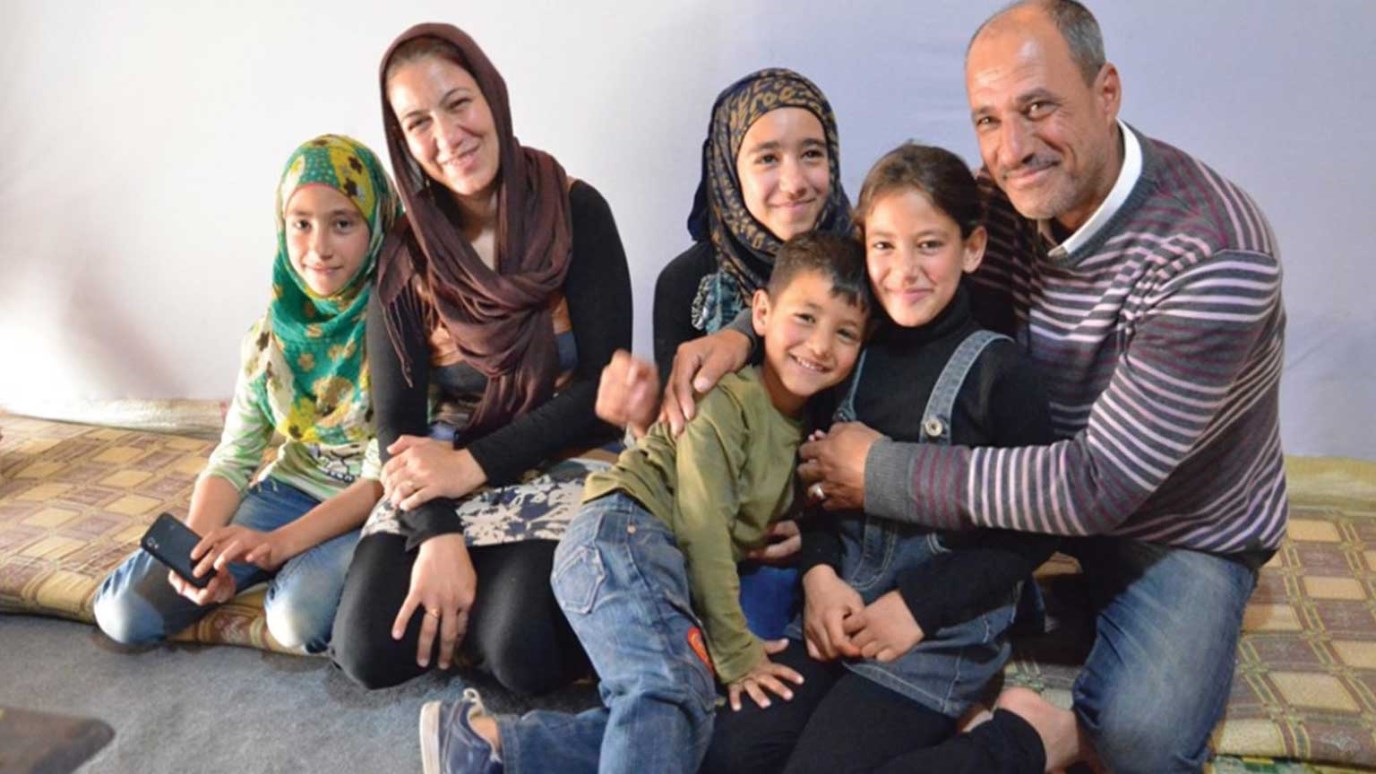 Maria's mother, Miriam, and father, Bilal, embrace Maria (center) and the rest of their family. “My biggest fear for them is to be uneducated,” says Miriam.

For the more than 5 million children affected by the crisis in Syria, including Miriam’s four children, the future is a troubling unknown. The road that led them away from a normal life to a makeshift tarp-and-wood home in Lebanon’s Bekaa Valley was sad and dangerous.

Dangerous may not be a strong enough word.

Miriam and her husband, Bilal, left Syria fearing for their daughters’ safety. “It’s different when you have girls,” she says. Kidnapping had become common. Going to school became a risk. “If you couldn’t pay the ransom they would kill the hostage,” Miriam told me, “and sometimes cut them up and send them back to you in a bag.”

Those horrors continue to play out within earshot of Miriam’s new residence.

The nearby mountains bellow with the sound of dropping bombs. “I hear it very well, “ Miriam’s 12-year-old daughter, Maria, says, “because it’s so close, and I feel sad.”

Maria used to love school. “I was No. 1 in my class,” she says proudly. “Mathematics was my favorite subject.” A bright-eyed girl with a warm, shy smile, Maria has missed school for more than three years now — three years and countless worry-filled, sleepless nights.

Like others in their informal tented settlement, Miriam and Bilal struggle to meet the daily needs of their family. They pay $300 every nine months to live here. An e-card from the World Food Program provides $19 per person, per month for food. That’s been decreased recently from $30 because of a lack of funding.

But it’s not only providing food that worries these parents. The weather in this valley can be harsh and unforgiving. When it snowed this past winter, Miriam and Bilal would stay up all night fearing that the make-do roof would collapse. Every two hours they’d wake up Maria or one of her siblings to hoist onto the roof to brush off the snow. The roof is too fragile to hold an adult.

Miriam and her family were among the first to flee Syria when war broke out. They are now entering their fifth year in Lebanon. Their situation has deteriorated and prospects for returning home are greatly diminished.

Asked what she hopes for her children, Miriam says, “In this situation, I don’t have any hope.” Daughter Maria is watching her dreams die too. “I wanted to be a doctor to treat patients. It’s such a noble job and humanitarian as well. I would treat the casualties of war,” she says.

“My biggest fear for them is to be uneducated,” says Maria’s mother, Miriam, “because that is their biggest weapon. Without that, they can do nothing.”

Miriam is right. Her daughter, Maria, is missing out on an education at the most critical time. And she’s not alone. Because of the fighting, the bombs, and the bullets, millions of children from Syria are being denied the greatest weapon of all — the opportunity to learn the lessons they need to make this world a better place.