We Read the Bible Together ... You Can, Too! 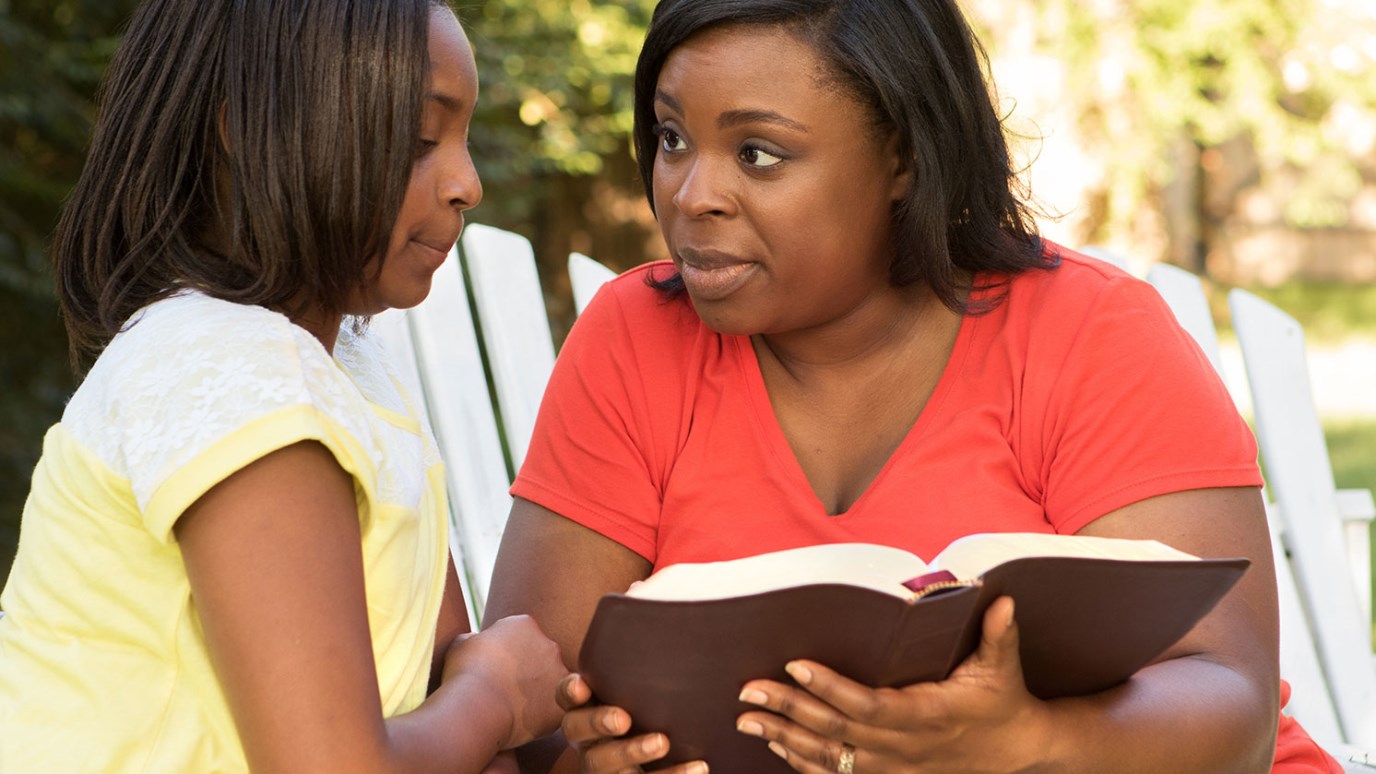 What are some ways you and your children could spend time together in God’s Word? How could making this a consistent practice benefit your family?

I’ve made many attempts to have a faithful devotional life, but they were always short-lived. I suppose I expected the discipline of Bible study to be easy for a Christian. When it was difficult and overwhelming for me, I felt discouraged and defeated.

In the process of a family struggle, I cried out to God for help, and He did something I wasn’t expecting at all. He revived me. He placed in me a hunger to know Him more intimately, along with a deep desire to read His Word.

I was thrilled. I couldn’t wait to delve into the Bible. However, there was something ironic about God’s timing. I was the mother of three children under age four. God gave me this great hunger for His Word at the most hectic time of my life! Yet I was determined not to let the busyness of being a wife and mom—or my past discouragements—diminish this appetite.

So I launched into a routine of Bible reading and prayer. Unfortunately, I quickly faced those same struggles with inconsistency that had plagued me for years. But I kept trying.

I also felt an urgency to get more of God’s Word into the hearts of my kids. We had just finished a children’s devotional book, and I was looking for what to do next … when an idea hit. I had two goals: I wanted to read the Bible, and I wanted my children to know God’s Word. Why not do both at the same time? Why not read the entire Bible together?

A Simple Plan; A Long-Term Commitment

My plan was simple: one chapter a day, five days a week. I shared this plan with my husband, Wes, and he provided much needed encouragement. However, after voicing the plan, I became curious to know how long it would take us to read the entire Bible. I put pencil to paper (factoring in “sick days”), and . . . yikes! My plan was going to take EIGHT YEARS!

I must admit, the idea of such a long-term commitment intimidated me, but I had a longing that would not go away. So we began.

The first few days of reading were tricky. I was all jazzed at the prospect of reading the whole Bible. For some unknown reason, I thought my children would share my enthusiasm. Instead, while I was reading about the fall of man, they were jumping and spinning in their chairs. I felt like I was reading out loud to myself.

But God was gracious to not leave me feeling this way for long. On the fourth day, after our reading, my kids went off to play. Then I noticed what they were playing. They were acting out what we had just read—in great detail. They hadn’t appeared to be listening, but they were hearing. They were hearing the Word of God. This was the boost I needed to keep going.

I soon realized that reading the Bible to children is not without some complications. Let’s face it, the Bible (particularly the Old Testament) can be quite graphic. I almost panicked when my preschool kids asked, “Mom, what’s a prostitute?”

Moments like that prompted me to start scanning ahead so I would know what was coming. I also came up with my own definitions for certain words—words my children needed to hear in order to understand the story but didn’t necessarily need a complete definition for just yet. So, for example, a virgin is “a woman who has never been married.” A prostitute is “a woman who goes from one man to another to another, instead of remaining faithful to a husband.” You get the idea.

Before long, I could tell that they really were listening and getting drawn into each story. After reading about a long line of Israel’s kings who did what was evil and provoked the Lord to anger, we came to the end of 1 Kings 16. Here we read about Ahab becoming king of Israel. The Bible says he did more to provoke the anger of the Lord than all the kings of Israel who were before him. When we finished reading chapter 16, I said, “Tomorrow, Elijah comes on the scene.” My daughter yelled, “Yay, we need this guy!”

Not only were they following along closely with the stories, but God was increasing their capacity to understand. Once I was working hard to explain what it means to quench the Spirit. I likened it to throwing water on a fire. I was trying to come up with another illustration when I looked over at my son. He had his index finger pointing up with the other hand covering his finger while he was singing softly, “Hide it under a bushel, no! I’m gonna let it shine.” He got it.

I shouldn’t be surprised when they understand, just like I shouldn’t be surprised when they want to respond to what we read. I saw this in an unusual and amusing way one morning as Wes was packing for a business trip. My son exclaimed, “While Dad’s away, we should fast from sinning.” Wes and I looked at each other. “Fast from what?” “From sinning,” he said again, smiling. “And the reward for not sinning is donuts!”

That was the first of a series of requests he made to fast and pray. We had read accounts of people who fasted and prayed, and he was ready to participate. He wanted to obey and that obedience was prompted by the Word of God. We did try to fast from sinning while Dad was away. (And Dad agreed to try not to sin while he was gone.) I’m not sure it was a total fast, but in the end we did enjoy the donuts.

A Struggle Turned to Joy

How could I go from an inconsistent devotional life to a steady time of reading and meditating on Scripture? God used my children! He took a discipline that had been a struggle for me and made it an immeasurable joy. I am overflowing with gratitude to God for giving me this idea and for constantly fueling the desire to be in His Word.

After five years, we finished the Bible on March 19, 2007. We spent the day celebrating together as a family. The experience was more than simply maintaining a discipline; it was about getting to know God.

On March 20, 2007, we started over in Genesis. Together, we continue—one chapter and one day at a time.

What are some ways you could spend time together in God’s Word with your children? How could making it a consistent practice benefit your family?

Carrie began reading Scripture with her kids nearly fifteen years ago. Since then, they have completed four trips through the Bible. Her children are now ages fourteen to nineteen, and she has "no greater joy" than to know that her children are walking in the truth.

Investments Worth Making
Dr. Charles Stanley
Follow Us
Grow Daily with Unlimited Content
Uninterrupted Ad-Free Experience
Watch a Christian or Family Movie Every Month for Free
Early and Exclusive Access to Christian Resources
Feel the Heart of Worship with Weekly Worship Radio
Become a Member
No Thanks