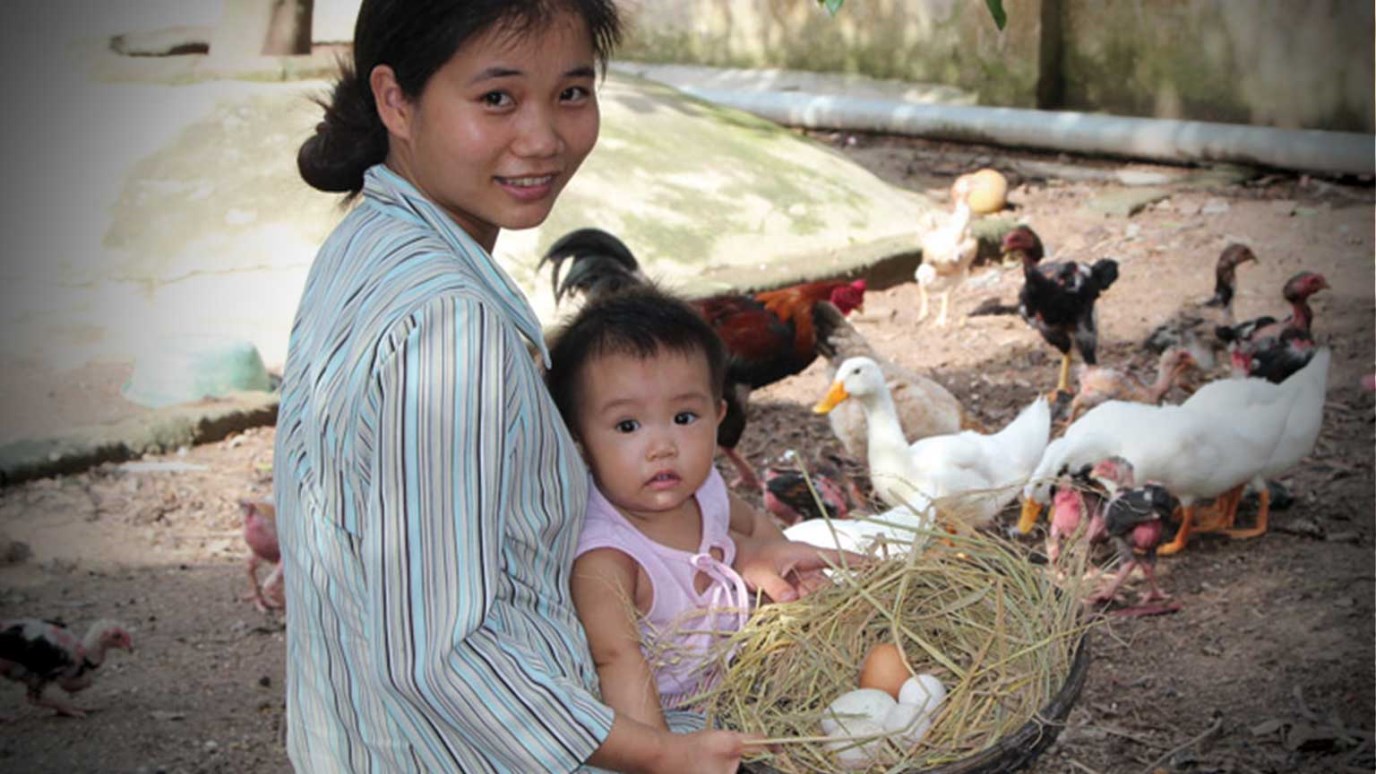 Mui's first child was malnourished, so she was determined to change her daughter’s situation by continuing to participate in her nutrition club supported by World Vision.

Tran Thi Mui, a young mother in rural Vietnam, was sad to learn that her first child, Vu Viet Ha, was malnourished. Child malnutrition can lead to reduced mental and physical development as children grow. Aware of this danger, Mui was determined to change her daughter’s situation by continuing to participate in her nutrition club supported by World Vision.

When Mui’s daughter, Ha, was born, she only weighed 2.5 kilograms (about 5.5 pounds); a newborn often weighs three kilograms.

Though Mui had attended the nutrition club in her village since she was three months pregnant, she discovered that Ha was slightly malnourished.

“Perhaps my child’s malnutrition status was my fault,” she admits. “I realized that having nutrition knowledge is essential, but thoroughly applying what I learned counts for much more. This has urged me to continue participating in the club after delivery to improve her nutrition.”

During her pregnancy, Mui learned from the nutrition club that it’s important for mothers to eat well so their children will be born healthy and at the full, expected weight for infants. How to get more food to eat -- and the right food -- is what counts. At the time, Mui was keeping the nutrition, vegetable garden, and animal husbandry knowledge she was learning in her head, not applying it to her life.

Child malnutrition is linked to an increased risk of disease and can lead to reduced mental and physical development as children grow. Mui was determined to change her daughter’s situation.

When Ha was three months old, Mui decided to return to her nutrition club, but participate more regularly this time. She began planting vegetables and raising some poultry for nutritional supplements from her farming plots. She has learned that her child would need to eat more nutrients after six months of being exclusively breastfed with her milk.

“Our nutrition club has three meetings each month, on the 8th, 15th and 24th. All club members agreed to set up this schedule because those are not market days in our community,” Mui says.

The between-market-day schedule also reminds rural mothers that they are able to get nutritious food directly from their farmland instead of at the market: vegetables, beans, eggs, chickens, fruits, fish. The nutrition club also gives young mothers like Mui a better chance to learn from each others’ experiences of caring for their children and other ways of improving their livelihoods.

“Now my daughter is nearly nine months old,” Mui says. “She weighs 7.8 kilograms and has six [teeth]. She would not have had such growth if I did not join the nutrition club in my village. I got nutrients from my farmland for my malnourished child. Some nutrients now are available in my gardens. Vegetables, chickens, ducks, [and] eggs are ready for her nutritional supplements. I am also able to bring some to market for more family income beside the money my husband earns by repairing electrical appliances.” The young mother beams.

The nutrition club was set up with 25 mothers and caregivers in March 2010 when World Vision started to work in Mui’s community, Cuong Chinh commune, where 31 percent of children under age 5 were identified as malnourished.

“We recently had an update of monitoring report on child malnutrition rates in our community,” says Vu Thi Lieu, head of the nutrition club. “Up to June 2013, this rate is [down to] 17 percent out of the total number of 430 under-5 children.”

The nutrition club membership has now increased to 60 mothers and caregivers, including participants from a water and sanitation project. “Many hands make light work,” a commune committee member says.

Improving child nutrition is no longer a proposal to solve in the community. World Vision has been helping rural mothers to improve nutrition for their malnourished children by not only having better knowledge about nutrition, but also cultivating their agricultural products right on their own farmland.

How Do You Raise a Child in Slavery?
International Justice Mission