The Words of Our Mouth 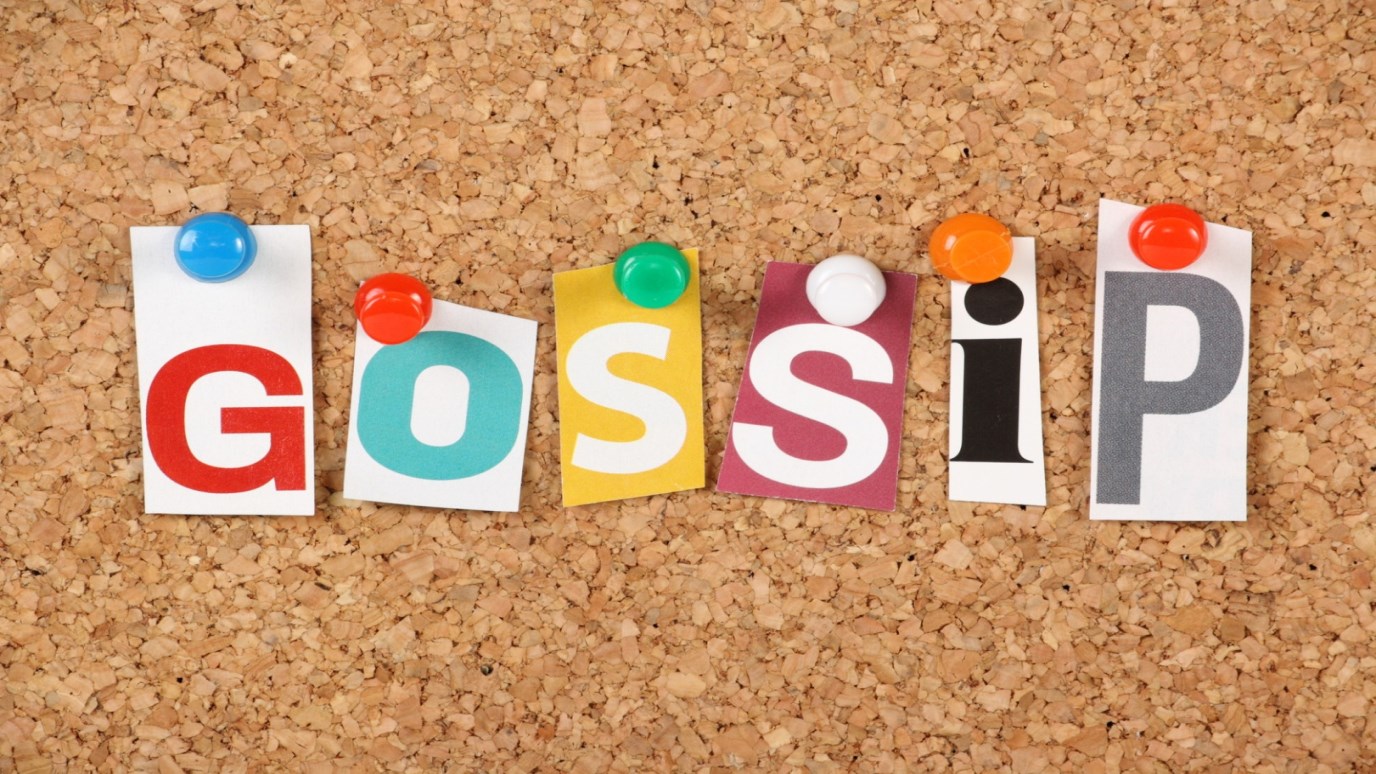 Charles Stanley explains why it's so important to guard against gossip.

Do you realize how powerful words can be? Have you experienced the profound impact they can have on your life? Perhaps you’ve been blessed by a loved one’s expressions of care and comfort. Or maybe you’ve seen how destructive people’s remarks can be. Their declarations wounded your heart so deeply that they left you hurting for years.

The ability to communicate is one of God’s gifts to us, but it’s also a privilege that carries great responsibility. What we say can heal those around us and draw them closer to the Father. But wrongly used, our speech can drive people away from Him and us. That’s why it’s important to understand how detrimental gossip is. It is one of the chief ways we misuse words, resulting in dishonor to God and harm to others.

Gossip is a serious sin.

Idle and malicious talk can never be “unsaid.” Think of our words as feathers released from a pillow on a windy day. We can never retrieve them all. Once the information has been passed on, it inevitably grows with each telling as innuendos and exaggerations are added. Even after the words have died down, the pain and devastation they caused remain. It doesn’t matter what motivated us to share the information; the results of doing so are never good.

James graphically describes the destructive nature of the human tongue as a fire that sets a forest ablaze (James 3:5-6). When we allow our words to become like flaming arrows aimed at someone’s reputation, they burn up all that is good and leave ruin in their wake.

Yet gossip is one of the church’s most accepted sins. We’ve become so accustomed to such talk that we may not recognize it as evil or realize we are involved. In Christian circles, it’s camouflaged and renamed to sound innocent and even spiritual. We say we’re simply sharing our concerns or telling others about someone’s situation so they can pray. But what we should ask is, What does God think about our conversations?

The Bible mentions two types of gossip, both of which are sinful. In 1 Timothy 5:13, the apostle Paul advises Timothy to deal with those who are “busybodies, talking about things not proper to mention.” If we actively search out and carelessly pass on “the latest news” about others, we are guilty of using our words for evil—even if animosity is not our motive. On the other hand, malicious gossip is intended to hurt someone. This is Satan’s language. In fact, the Greek word from which it’s translated is diabolos, the same word used for the Devil. He is the accuser, and those who deliberately slander others are following in his footsteps.

If you still have any doubts about the seriousness of this sin, understand that Paul said gossip would characterize both those who reject Christ (Rom. 1:28-32) and lawless unbelievers who will live in the last days (2 Tim. 3:1-5). These two passages represent the worst human traits, and gossip is right in the middle of both lists.

Clearly, Christians have no business engaging in the destructive practice of gossip—it simply does not fit who we are in Christ. Yet many believers struggle in this area. Since “the mouth speaks out of that which fills the heart” (Matt. 12:34), we must do some internal investigation.

What heart conditions lead us to talk about others?

Pride and self-importance: Those who like to be “in the know” make it their business to find out what’s going on in people’s lives. Talking about others makes them feel more important, even if it’s at someone else’s expense.

Low self-esteem: On the other end of the spectrum is the person who feels inadequate and insecure. Putting someone down helps such an individual feel superior—at least for a while.

Need for acceptance: This is probably the main reason many people participate in gossip. To take a stand against it or leave the room is a sure way to isolate oneself and possibly become the next subject of the conversation. But to stay and take part brings a feeling of belonging and acceptance.

Jealousy: This green-eyed monster can drive us to cut others down simply because we want what they have. Criticizing someone’s abilities, possessions, choices, or relationships sends the message that we could do it better, thereby elevating ourselves and demeaning the other person.

Malice: This is a purposeful attempt to destroy or discredit someone with accusations and slander. The motivation is revenge. Of all the heart conditions that lead to gossip, this one most closely aligns with Satan’s motive for accusing us before the Father.

As with any sin, idle or spiteful talk always produces negative results. And the scope of these consequences is more extensive than any of us might have imagined.

For the victim: The most obvious person who suffers is the subject of the gossip. Being the target of rumor or slander is very painful and embarrassing. The words of others can destroy a reputation, divide a family, break friendships, and ruin future opportunities. Even if the information is untrue, the accusation may continue to wreak havoc for many years.

For the gossiper: Although the consequences for the one who spreads rumors may not be as readily evident, they are serious and far-reaching. You’ve heard the old saying, “When you sling mud, you’re losing ground.” Well, that’s exactly what happens to people who indulge in this dirty business. Those who attack someone else’s character end up losing their own integrity. By yielding to sinful desires, they allow “the flesh” to dominate their lives. This quenches the Holy Spirit and stunts spiritual growth, making them unfruitful.

Gossip also feeds self-righteousness and pride. Those who talk about others’ short- comings develop a judgmental spirit and blindness to their own sins. They become like a person with a log in his eye who focuses on someone else’s tiny speck (Matt. 7:1-5). Putting others down never elevates anyone but instead reveals the sinful state of their own heart. Since their inner character is obvious to people with discernment, gossips actually deprive themselves of good relationships. Their friendships are limited because they’ve proven untrustworthy. No one wants to become their next subject of conversation.

Habitually engaging in harmful chatter also ruins our testimony for Christ. Instead of offering the lost world an appealing invitation to salvation, slanderous language gives unbelievers a good reason to reject our message.

For the listener: Since words by their very nature are influential, those who listen are also affected by gossip. Few of us can hear negative comments and not let them shape our perception and feelings about others. Those who listen to rumors and criticism are letting poison enter their hearts and minds, while opening the door of temptation to pass on the news to someone else.

When believers tear one another down instead of building each other up, the entire body of Christ suffers. Countless churches have experienced splits because of rumors and accusations. As the words fly, sides are taken and factions form. Soon the unity that Christ desires for His body is destroyed, kingdom work comes to a halt, and God is grieved.

Satan, on the other hand, takes great delight in our allegations against each other because he has us exactly where he wants us—causing division, thwarting the Lord’s purposes, and destroying our testimonies. When we’re busy maligning each other, we have neither the time nor interest to reach the lost.

Since everyone has been guilty of this sin at one time or another, we all need to learn how to deal with it. Children of God should honor Him and fellow believers with their voices (Col. 3:15-17). We can’t afford to trivialize, excuse, or rationalize thoughtless or mean words about others.

How can we participate in that which God detests? To overcome this sin, we must take a stand against it.

The ultimate remedy is a changed heart.

Since words originate from the heart, external control of our behavior is not enough. To be truly free from the sin of gossip, we require transformation from the inside out—and that is exactly what Christ specializes in doing. He can create in us new hearts that produce words which honor Him and comfort those who hear. This world is filled with accusations and criticism, but we are called to extend mercy and compassion, not condemnation. Let’s represent Christ to those who are yearning for His grace.

Everything we have has been entrusted to us by the Father, and that includes our words. One day we will each give an account to the Lord for how we have utilized this marvelous gift. Now is the time to use our voices for good and say with the psalmist, “Let the words of my mouth and the meditation of my heart be acceptable in Your sight, O LORD, my rock and my Redeemer” (Ps. 19:14).

Serve One Another
Chuck Bentley