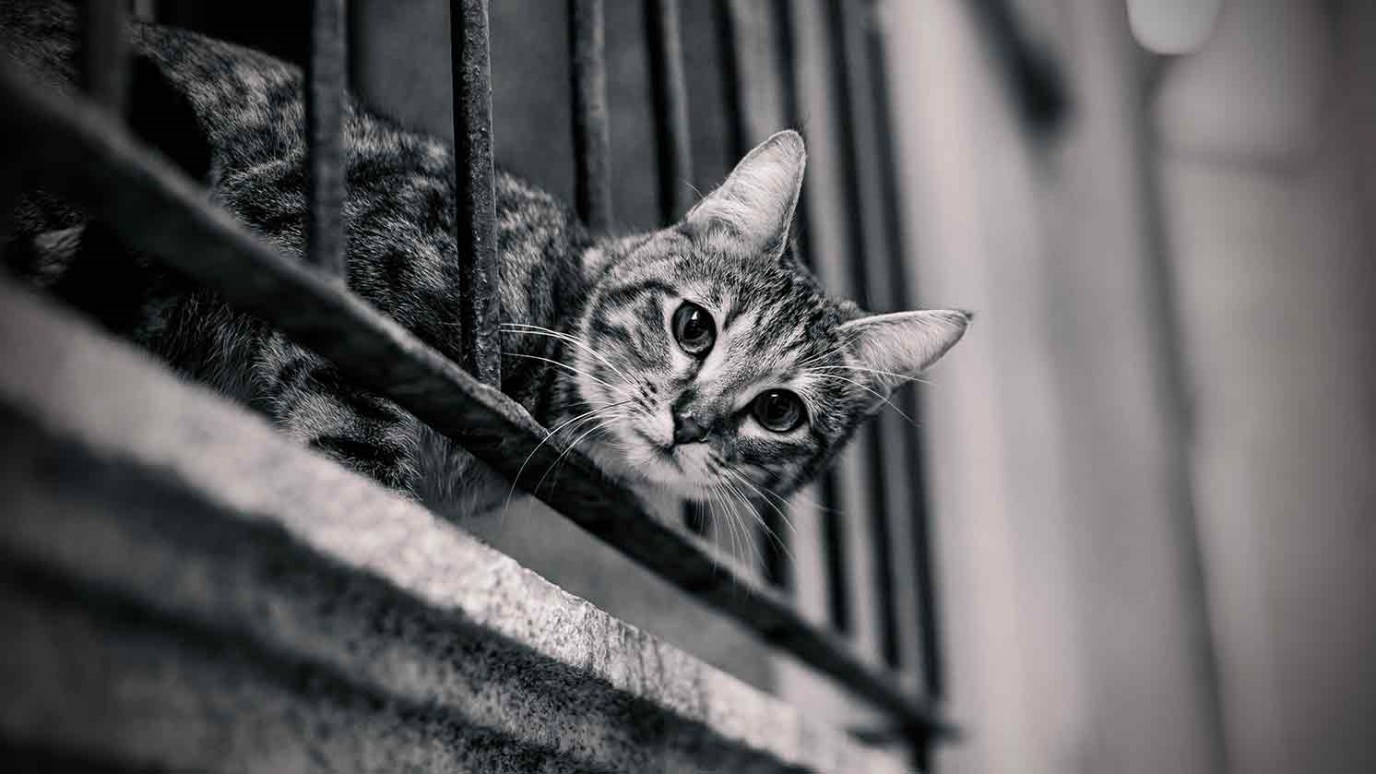 Like Buddy the feral cat, we humans sometimes flee from what we need most. We also have a hard time letting go of our survival skills.

Buddy was a feral cat. A wild, untrusting resident of crawlspaces. A savvy predator of rodents. He kept his distance from people at the apartments. He learned that the hard way; many of them had not been kind.

So when Buddy used to watch our poodle, Gus, on his walks, he did so from a distance. But one day when Gus was out for a walk, Buddy came close. The next day, he came a little closer. Soon he was walking with Gus almost daily. He befriended the one creature who seemed to be completely harmless. And that’s how he got his name: Buddy.

When we moved to a house, we took Buddy with us, fully expecting that after seeing an unfamiliar neighborhood, he might run into the woods and never come back. But he did come back—dinner has a way of doing that to a cat—and he has been with us ever since. Buddy the feral cat isn’t quite as feral as he used to be.

Still, he has his wild side. Sometimes I call him Catsquatch because, like the shadowy beast of the Northwest, he has a knack for disappearing into the woods and causing you to question whether you actually saw him.

And sometimes I call him Skitty because he’s a kitty with a serious case of skittishness. I guess that comes from his early years of being a survivor of teasing, tormenting apartment dwellers. But that was years ago, and he still sometimes jumps at the slightest move.

There’s his daily routine of getting right in the path of the car, for example. He looks shocked that the car is actually coming toward him, repositions himself further down the driveway where the car is headed, and then when the car comes closer, acts all persecuted because obviously you’re following him with the intent to run him over.

Or that morning when he and I were both in the driveway, and I let a very modest burp escape—don’t judge; it’s a normal bodily function, and no other humans were around—and Buddy bolted into the woods and didn’t come back until evening.

Sometimes after I’ve fed him and gone back inside, I’ll open the door again to go back out for one reason or another. And he runs away like I’m dangerous. “I’m the guy who just fed you, Buddy!” I say with the slow, emphatic enunciation you might use for the hearing impaired or someone who doesn’t speak English very well. He doesn’t listen.

This cat desperately craves human affection. But he’s desperately afraid of it too. He pokes his head in the open doorway to see what the humans are doing and then darts away if the humans come near. He flees what he most needs.

The baffling thing is how perfectly friendly he is at times, rubbing against me while I’m standing in the yard, weaving in and out between my feet because he can accept the affectionate touch of a stationary leg. But if my hand reaches out to pet him with any sense of suddenness, he’s likely to jump back and stare at me with accusing eyes. It’s reflex.

Sometimes I try to reason with him. “C’mon, Buddy. Really? I feed you, give you water, and don’t overreact when you leave uneaten squirrel organs on the doormat. Haven’t I proven I’m not going to hurt you?” (There was that one time when we stuffed him in a crate and took him to the vet to have him neutered. But it took him two days to get over the sedation, so I’m thinking he shouldn’t remember. Bygones, obviously.) Apparently, some reflexes don’t respond to reason.

Anyway, news flash to Catsquatch: You’re part of the family. It’s okay to act like it. Relax.

Come to think of it, that’s not a bad message for us humans either. According to sacred texts, we were adopted from the every-man-for-himself streets into a very loving family. Our Father showers his affection on us, yet sometimes when we see him coming—whether in unfamiliar circumstances or sudden changes—it looks threatening. We jump. We aren’t sure of his intentions. Is he good to us today? Can we trust him? We know the right answer, but the reflexes take over. Even after all these years, we act like we aren’t sure.

I imagine it’s the same when street children in third-world countries are adopted into loving, generous families. There may be plenty of food on the table, but if you’re used to fending for yourself to survive, I suspect the temptation to stuff a few rolls in your pocket might be overwhelming. Your next meal may not be a sure thing—even though you’ve been assured of it. Learning to trust a generous heart doesn’t come easy.

No one adopted into God’s family has to rely on survival skills. We don’t have to earn our status in the family or wonder if the next meal is a sure thing. We can go to the fridge whenever we want and sit on the furniture like we own it. Because we do. We’re part of the family. We can relax.

Buddy/Skitty/Catsquatch has taught me a valuable lesson. He has given me a glimpse of how God might feel when I’m skittish in his presence, unsure of his intentions toward me, suspicious of his movements. I’ve seen how silly it is to dart into the woods, spiritually speaking, whenever God gets a little “too close” for my comfort. I know what it’s like to flee the affection I most need because, even though I desperately crave it, it may require too much surrender of my own survival skills. I’ve seen myself as a nervous adoptee.

So it’s come to that, apparently. Catsquatch and I are a lot alike. I hope both of us fully learn to trust, rest, and simply be loved. After all, we’re part of the family. And it’s okay to act like it.

Immeasurably More
Chris Tiegreen
Have you ever asked, "Why, God?"
Emily Manke
What I Wish I Would've Known Yesterday
Emily Manke
Follow Us
Grow Daily with Unlimited Content
Uninterrupted Ad-Free Experience
Watch a Christian or Family Movie Every Month for Free
Early and Exclusive Access to Christian Resources
Feel the Heart of Worship with Weekly Worship Radio
Become a Member
No Thanks