The Confrontation - A Family Devotional 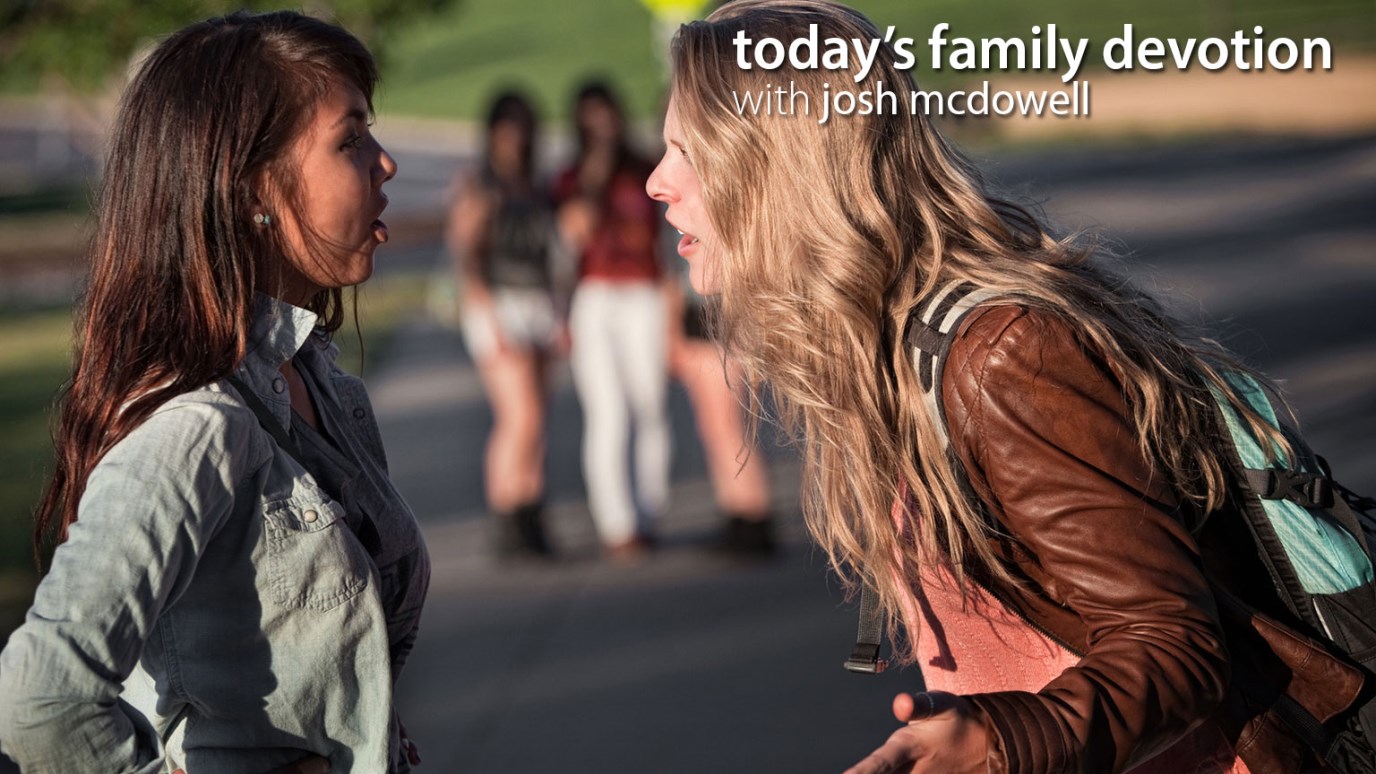 Do you ever keep track of someone’s “wrongs” against you?

God commands us to love each other.

Monica rolled out of bed and rubbed the sleep out of her eyes. It had seemed to take forever for her to fall asleep last night. She had spent half the night thinking about her plan to tell Gina—the “former friend” who had stolen her boyfriend, Jimmy—that she had seen Jimmy and Susan Brock at the movies. She didn’t plan to mention that Jimmy had been at the theater with a couple of his friends and Susan had been standing in line behind Jimmy with her parents.

She had spent hours wrestling with the rightness and wrongness of her decision but had fallen asleep determined to get even with Gina.

I’ve made my decision, she told herself as she got dressed. She rushed through breakfast and arrived at school in time to see Gina standing at her locker near the chemistry lab. She glanced up and down the hall for any sign of Jimmy. The coast was clear.

Gina’s eyes widened at Monica’s greeting. “I’ve got something I need to tell you.” Monica took a deep breath. “I’ve been really mad at you for going out with Jimmy. I blamed you for breaking me and Jimmy up, and I’ve thought about ways to get even with you. But I finally had to admit that it would be wrong because—well, because I’m a Christian and God tells me to love you.” Monica blushed. “Plus, I just realized this morning that you were one of the best friends I’ve ever had, and I’d—I’d really like to try to be friends again. What do you think about that?”

The first bell rang. “I’ll see you later, OK?” Monica said, inwardly congratulating herself for the effect her words had obviously had on Gina. Gina’s eyes had clouded with tears as if she couldn’t believe what she had heard. Monica nearly skipped down the hall with self-satisfaction.

Throughout the day she thought about the encounter. She knew that she had done the right thing, and maybe even saved a good friendship. In her heart she knew that even though she had planned to teach Gina a lesson, she’d really taught herself. And from now on, she would remember what God’s love was really like.

TO DISCUSS: What do you think Monica would have gained by “teaching Gina a lesson”? Do you think she gained less or more by acting lovingly toward her instead? First Corinthians 13:5 says that love “keeps no record of when it has been wronged.” What does that mean? Do you ever keep track of someone’s “wrongs” against you? Do you need to change anything in your attitudes or actions in order to obey God’s command to love others (even those who have hurt you)?

TO PRAY: “Heavenly Father, when people make us angry, we want to get even sometimes. Show us how to reflect your love instead of getting even.”

As the World Goes to Pot
Dr. Tim Kimmel