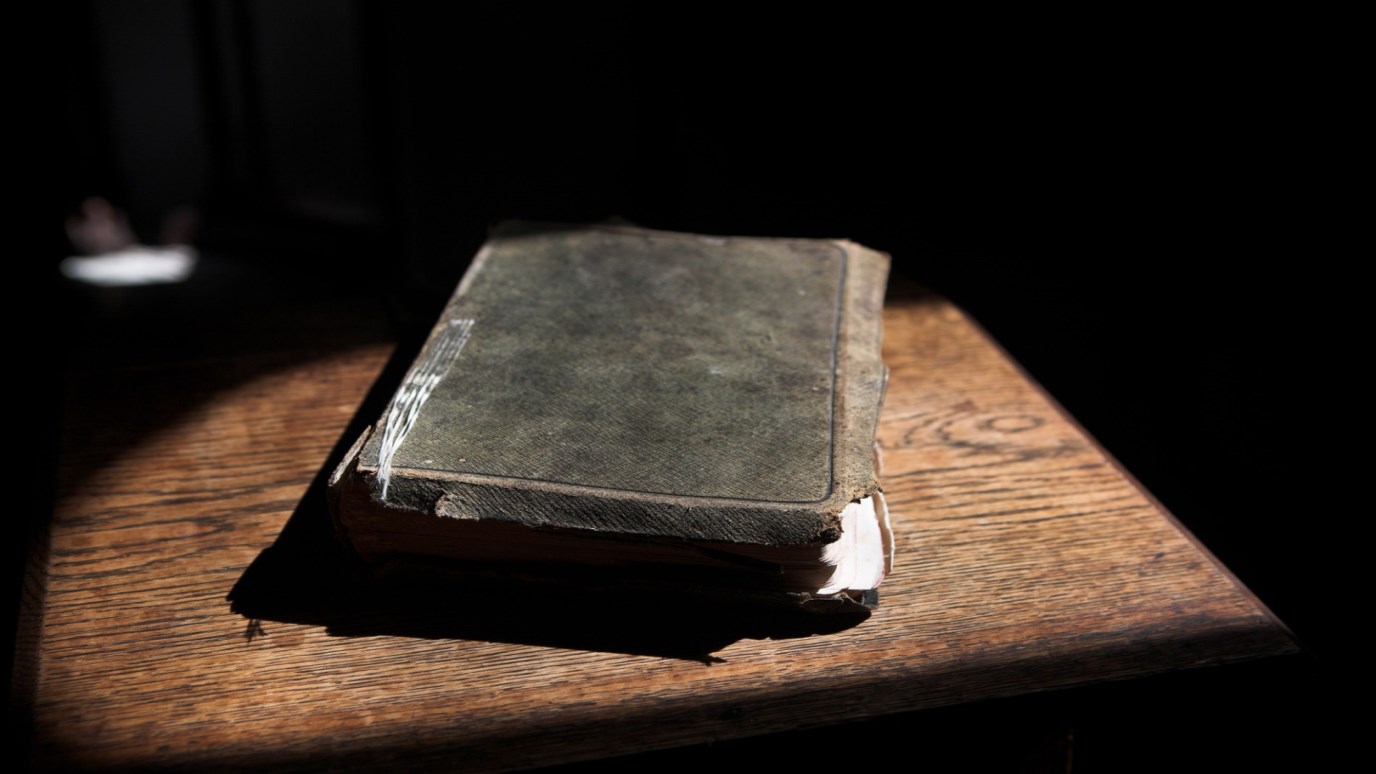 Reading Scripture from Genesis to Revelation is no small task. Sandy Feit writes of Judy Reamer's plan to help you do just that—hundreds, maybe thousands, of times.

First she ripped the cover off her Bible. Then she grabbed an X-Acto and began to slice…

Wait! Before you add this woman to the prayer list, let me introduce Judy Reamer, a popular conference speaker with a calling to “get people to the Bible and engage them with the Bible.” Her most requested teaching—“Breaking the Bible Barrier”—addresses two primary perceptions hindering Christians from becoming lovers of the Word: that it’s too time-consuming and hard to understand.

The scene above has been replicated hundreds of times over the last 30 years. It’s Reamer’s demonstration of how to cut a Bible into four segments and rebind them as mini-volumes. Even slow or young readers find the approach manageable, including her own daughter who—at the age of 12—read through the whole of Scripture four times in one year.

Reamer wasn’t always an avid reader of God’s Word. In fact, after 12 years in ministry, she still hadn’t read the entire Bible. Speaking opportunities increased, but the busy mother of four felt she lacked the time to delve into the Good Book for herself. So, assuming it was sufficient to know the “right” smatterings of Scripture, she did what far too many Christians do: she learned about the Bible from other teachers and authors and taught out of their overflow.

If you’re wondering how an inexperienced believer found herself on the Christian speaking circuit in the first place, that door was opened by her unusual coming-to-faith story. The short version is that she was raised in a Jewish home and later spent years looking for meaning in cults and New Age philosophies. Then a vacation landed her in Las Vegas, where, thanks to a scheduling change, her childhood idol Pat Boone happened to be performing.

Reamer still isn’t sure why her husband uncharacteristically insisted she call the singer at his hotel or why she uncharacteristically complied. Nor did Boone know why he returned the call. But he later said her name “leaped” off the list of messages, compelling him to contact her. And “How big is God!”—that’s Reamer’s favorite expression—they met after his concert and spent hours talking about the Lord. Then Pat Boone led Judy Reamer to faith in her Jewish Messiah.

Reamer soon started receiving invitations to share her colorful testimony, playfully titled “God Wins in Las Vegas.” A church asked her back to speak on a topic of their choosing, and before long she had a repertoire of teachings and a booked calendar. On one retreat, after leading attendees through some challenging introspection, Reamer felt the need to lighten things up. So for fun, she opened the afternoon session by directing everyone to a nonexistent book of the Bible. “Turn to Obadiah, chapter one,” she instructed, thinking she’d pulled the name from a genealogy or some other obscure verse. Wondering why no one seemed to get the joke, she watched as everyone stopped flipping pages and looked up, ready for instruction. Horrified, she realized, Obadiah IS a book of the Bible?

“On second thought,” she said, “let’s go to Isaiah 27.” She saved face but felt ashamed that so many sat under a teacher who’d never read the entire Bible. Being “in good company” was no comfort—she’s since learned that more than nine out of ten Christians and nearly as many American pulpit pastors have never read through the entirety of Scripture. Reamer desperately wanted to be a Bible reader and pleaded with God to make it happen. “There was no desire to impress people,” she recalled. “I simply wanted to know the Author: What was on His mind? What was in His heart?”

She tried reading large portions, but the scholar in her proved more frustrating than helpful. Complex chapters drove her to lexicons, commentaries, and Bible dictionaries, which only bogged her down as she sorted through details.

Then, just a week after the Obadiah incident, her son came home from his Christian school with a pamphlet about Phillip Green, a pastor who’d read through the Bible literally thousands of times. Sensing her prayer was about to be answered, Reamer immediately began following the handout’s suggestions. “After seven days,” she said, “I was a quarter of the way through the Bible, taking in so much Scripture that it was pushing out the thoughts of the flesh. I was already beginning to think with the mind of Christ.”

“The more you take in, the more you will see connections throughout the entire counsel of God—and the more He’ll speak directly to you.”

Days later God expanded on His answer to her prayer. On an errand across town, Reamer bumped into church friends and their companion—Phillip Green. The coincidence amazed her, as did the discovery that he was in town to speak at meetings all week.

Reamer attended every session. Humanly speaking, the event was unimpressive, with only about 25 in attendance at that tiny church each night. But Green’s messages pro- vided the foundation for what would become a favorite teaching: that besides prayer and studying Scripture, a third component is essential to the devotional life—simply reading the Bible cover to cover, over and over.

“Since God primarily speaks from His Word, reading a verse or two a day doesn’t give Him much to work with,” she explained. “Our job is to get as much Scripture as possible into our ‘eye gate’ so the Holy Spirit will have more to bring to remembrance according to our situations and needs (John 14:26). Then, the more you take in, the more you will see connections throughout the entire counsel of God—and the more He’ll speak directly to you.”

That’s why overcoming those common barriers is critical—and the reason Green devised his simple plan. Understanding how the eye and brain function to take in text, he suggested using a giant-print two-column Bible and pulling a blank business card down each page as a “coach” to move the eye along. He also recommended dividing the text into four sections, as most people find huge books daunting. The plan in no way replaces study and meditation, both of which are necessary for Christian growth, Reamer clarified. “But my reading time is for reading. If I come across an idea I want to study or chew on, I jot the verse down and revisit it later. My purpose in reading is to see the big picture in context.” She draws a comparison to the “Maid of the Mist” boat ride: tourists see, smell, feel, hear, and taste Niagara Falls in an up-close-and-personal way. But without viewing the Falls from an overlook, they can’t appreciate how those aspects fit into the entire experience.

“I came to love the whole story of God through mere reading,” Reamer said. “But now I’m taking hold of the Lord Himself far more deeply, simply by meditating on the words I’ve seen so many times. This wouldn’t have happened had I not read and read and read.”

Splitting the Bible and rebinding as four mini-volumes promotes success by making God’s Word portable and user- friendly. Here’s how to make your own set:

1. Remove the cover from a giant-print two-column Bible. With an X-Acto, release the New Testament by cutting through the spine. Then divide the Old Testament after 1 Samuel and after Psalm 102.

2. On an open manila file folder, trace (as one long rectangle) the front, spine, and back of each segment. Cut out the shape. Then gently score and fold the two lines forming the spine. Note: Using self-adhesive paper on the outside of the manila folders improves durability.

3. Spread white glue on the spine of one section, and attach the cover. Repeat with remaining sections, and stand mini-volumes on their glued edge to dry.

The Seed of Faith
Stephanie White

How to Commit Idolatry
Kelly Levatino

Shining Words
FaithWriters.com
Follow Us
Grow Daily with Unlimited Content
Uninterrupted Ad-Free Experience
Watch a Christian or Family Movie Every Month for Free
Early and Exclusive Access to Christian Resources
Feel the Heart of Worship with Weekly Worship Radio
Become a Member
No Thanks