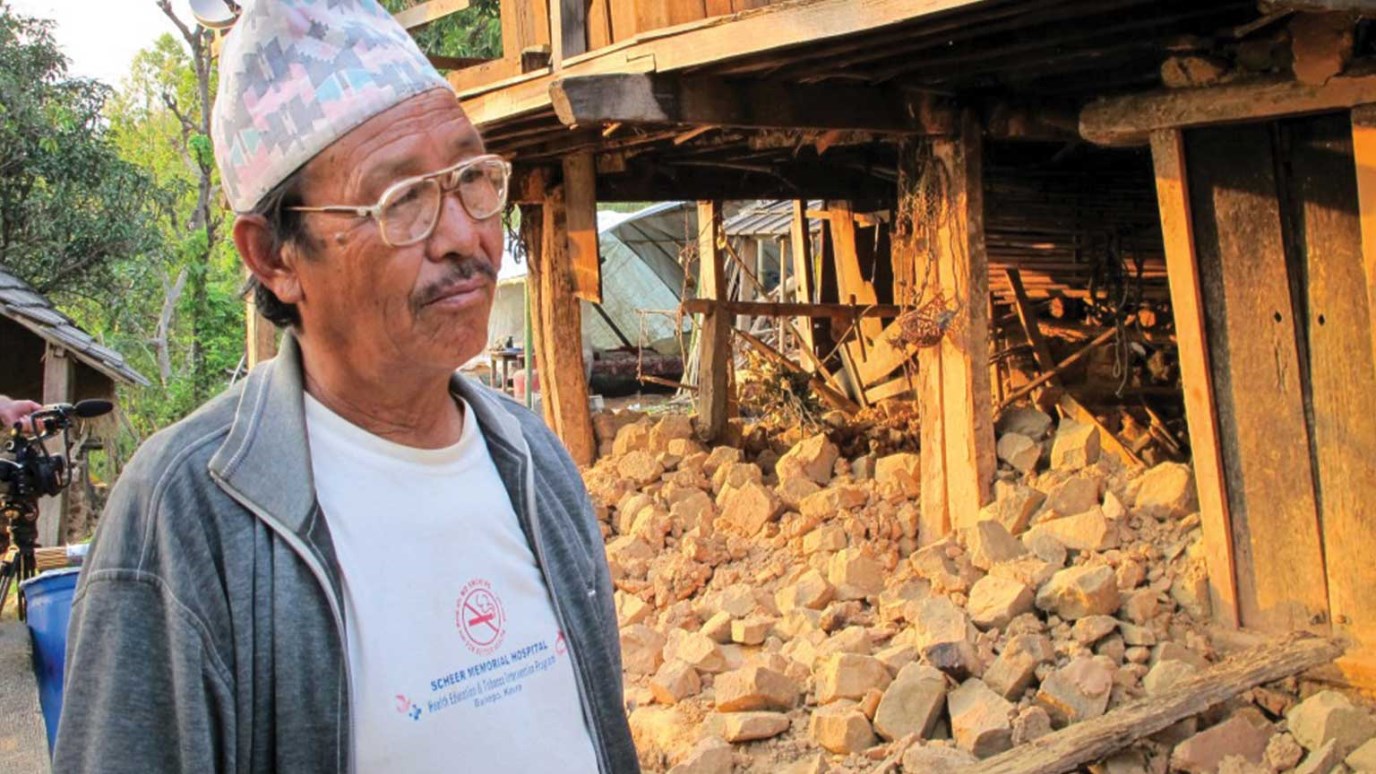 On the side of a mountain near Sindhuli, Nepal, Bhuban Bahader Magar stands next to his house, which was destroyed by a powerful earthquake on April 25.

Bhuban Bahader Magar built the best house he could afford.

It's framed with heavy timber. The ground floor walls were in-filled with a thick layer of stones and mud. The second-story wooden walls were topped by a concrete tile roof.

In their home, Bhuban, 66, and his wife, Fhul, 58, lived an ordered life. On April 25, Bhuban was thinking: After lunch, a nap, then take the buffaloes out. Oh, and he noticed a rip in his umbrella and decided to thread a needle and repair it.

Then the shaking of a 7.8-magnitude earthquake started. The frame of the house shook and bent under the force of the earthquake. The rock walls fell away. But the roof didn’t collapse. Bhuban and Fhul got out alive. But their once-sturdy home became a precarious leaning pile of rubble and wood.

“My house is 10 years old. I hired local masons to build it,” Bhuban says. “I’d build it back just the same, if I had the money. If our house is not put back, we will feel deep grief.”

Instead of their comfortable house, Bhuban and Fhul are sleeping in a tarpaulin shelter next to the rack where they store wood for the cook fire and fodder for goats and buffaloes. The shelter is protected on one side by the steep hillside.

Yet they are glad to be home after camping several days by the school under a tarp with their neighbors.

Margarettha Siregar is World Vision’s manager for water, sanitation, and hygiene (WASH) for the earthquake response. She says many affected families like Bhuban and Fhul are living close to their livestock.

The animals are their most valuable possessions now that their houses are not habitable.

“Living so close to the cattle is not good for hygiene,” Margarettha says, especially with the rainy season coming on and the number of mosquitoes and flies increasing.

She also worries that villages that had been declared “open defecation free” are now going back to unsanitary habits, because their toilets were destroyed.

“If steps are not taken now, diarrhea and other diseases could become a serious issue because of poor sanitation,” she says.

Without the comfort and security of their home, Bhuban and Fhul worry now about the rainy season. It’s time to cultivate their maize, which is nearly a foot high and needs attention.

“Now our need is for better shelter," Bhuban says, "the rain is coming.”

Listen to the Children
World Vision

Old Beyond His Years
World Vision