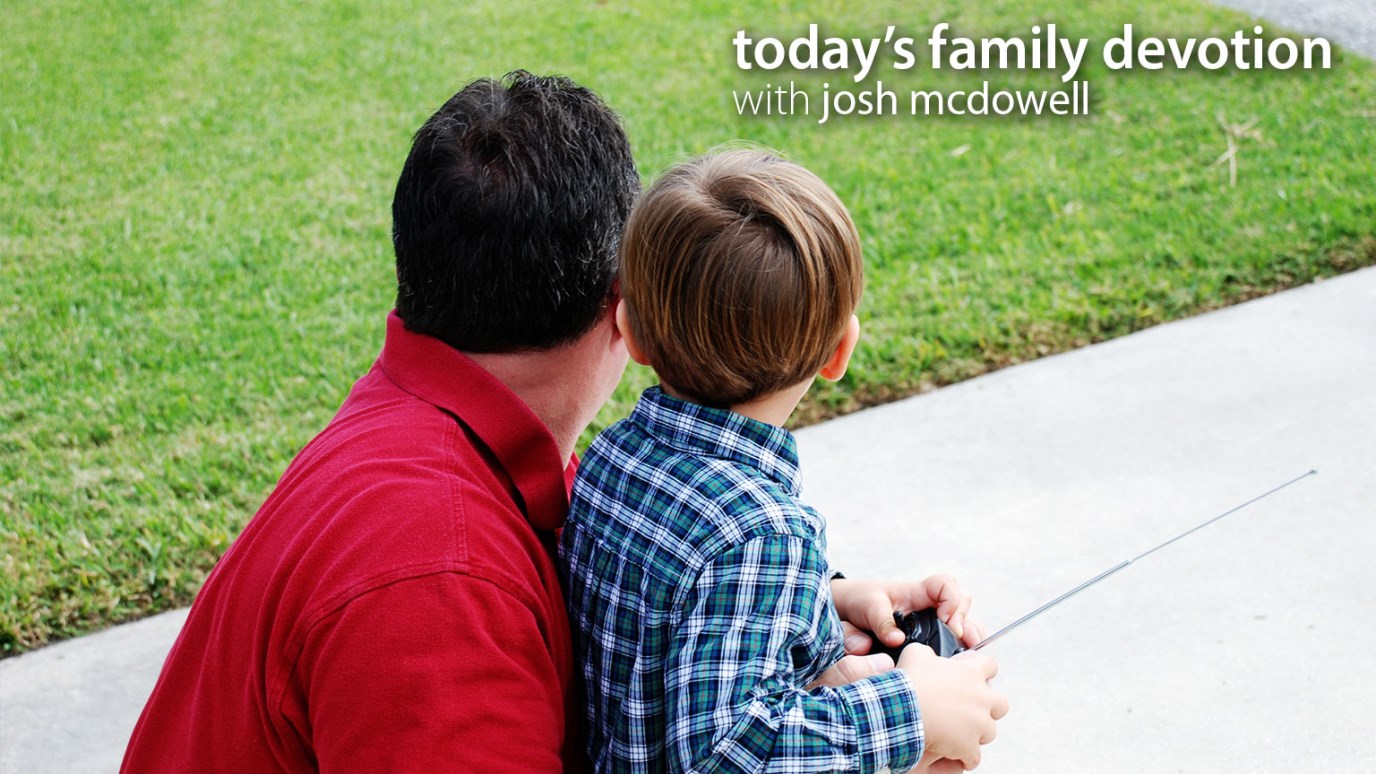 True self-control is really ‘remote control’ because it comes from the Spirit of God. Which means He gives us the power to be self-controlled.

George’s dad called him in from the garage, where he had been playing for over an hour with his new remote-controlled car. “It’s time to wash up for dinner,” Dad said.

George reluctantly turned the battery-powered car off and set his new TurboJam set down by the garage door. A few moments later he sat down at the dinner table.

After the family said grace together, George talked about his new car. He told his parents about his friend Robbie’s reaction to his purchase.

“Robbie says he wishes he could save money like I can,” he said proudly. “He thinks I’m really cool because I can save up for things instead of spending all my money as soon as I get it like he does.”

Dad said, “George, why don’t you and I go play with your new car together?”

“Really?” George said, his voice tinged with excitement. “That would be cool!”

A few moments later, Dad held the controller to George’s new car as George showed him how it worked. Finally, Dad nodded as if he understood. He put the controller on the tool shelf against the garage wall and knelt down beside the car. He turned on the switch beneath the car and set it on the garage floor. “Let’s see what it can do,” he said.

“You need the controller, Dad,” George said, pointing to the shelf.

Dad shrugged. “I thought we’d try it without the controller.”

George’s forehead wrinkled in confusion. “It won’t work without the controller, Dad. That’s where everything comes from.”

Dad didn’t move toward the shelf, but instead fastened his eyes on George. He nodded. “That’s what I thought,” he said. He laid a hand on George’s shoulder. “And it’s the same way with you and me, son.” He stood. “I think it’s great that you saved your money instead of spending it, and I’m not surprised that Robbie wishes he were more like you. But I want you to understand that true self-control is really ‘remote control’… because it comes from the Spirit of God. That means he gives us the power to be self-controlled-”

“And we shouldn't think we did it all by ourselves, right, Dad?” George asked.

“Absolutely!” Dad said as he reached for the remote control.

TO DISCUSS: Complete the following statement: “Today’s Bible reading says you are controlled by the Spirit of God if__________.” How can you let God’s Spirit control you more and more?

TO PRAY: “Lord, thank you for enabling us to live Spirit-controlled lives.”

Parenting: Identity
Focus on the Family

Are They Getting It?
Renee Swope
Walking Through Samaria with Katie Kenny Phillips
Walking Through Samaria
Follow Us
Grow Daily with Unlimited Content
Uninterrupted Ad-Free Experience
Watch a Christian or Family Movie Every Month for Free
Early and Exclusive Access to Christian Resources
Feel the Heart of Worship with Weekly Worship Radio
Become a Member
No Thanks