Race Against Time to Rid Polio in Somalia 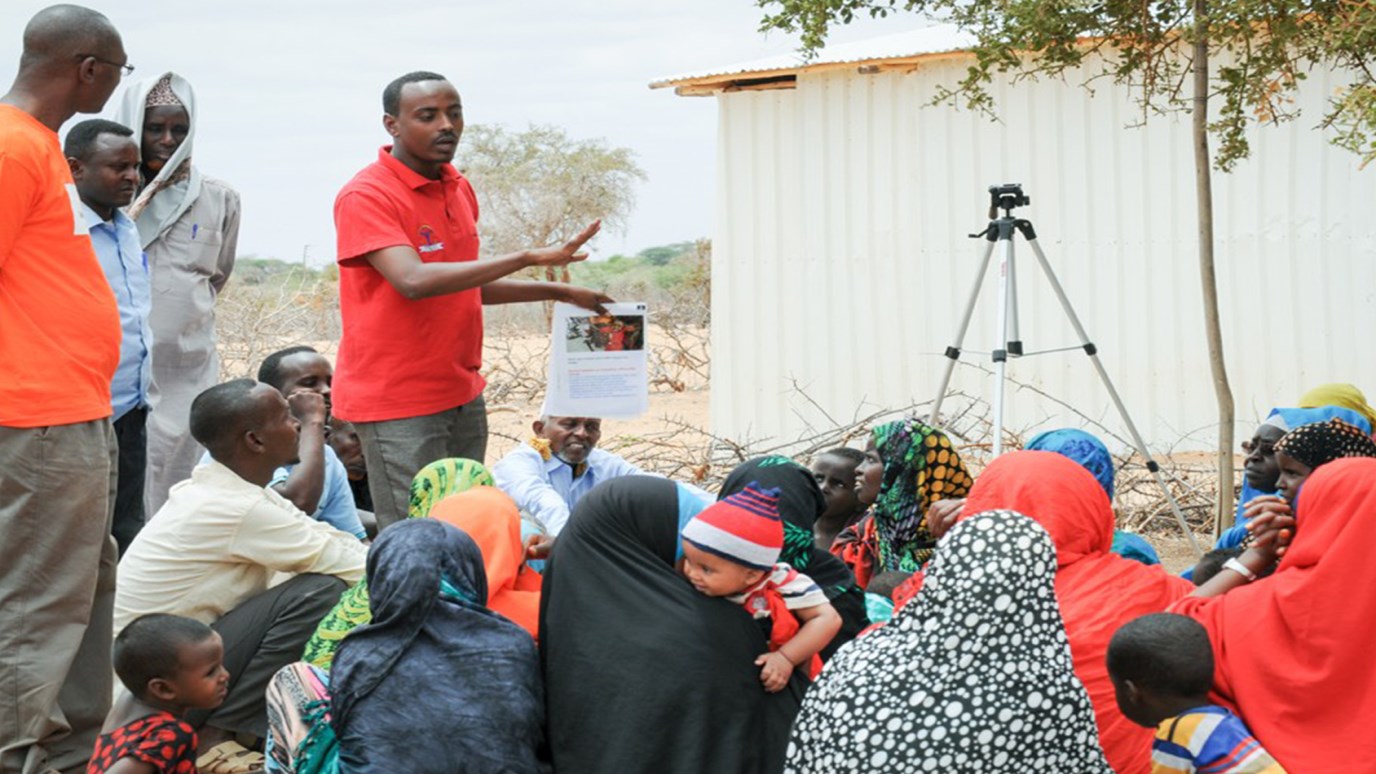 The current polio outbreak is part of the bigger health problem facing Somalia, following years of conflict and natural disasters that have also broken down systems.


In Hawalajiro village, southern Somalia, women and men listen to a message about the dangers of polio. World Vision plans to immunize 100,000 Somali children against the disease.

It is hard to believe that the raft we are about to board can carry more than five people. It’s made of old fuel drums tied together with sticks; it hardly looks strong. It is one of only two rafts that serve the Dollow area on Somalia’s Juba River; the other one is broken down.

“This raft carries goods, including bags of rice and sugar, for traders across in Dollow town,” says pilot Hussein Gurre, as if to reassure us.

There is uneasy silence, as the raft loaded with 10 passengers and luggage, starts moving.

It’s a familiar experience to Ibrahim Abdulahi, seated at the rear. Ibrahim is a health worker with World Vision assigned to the mobile clinic team that visits more than 200 villages in Dollow District. Dollow is a transit point for internally displaced Somalis seeking safety, as well as refugees seeking assistance on the Ethiopian side of the border.

“The river has crocodiles, so you can imagine how dangerous it is for my team and I, who have to cross every day,” says Ibrahim.

The team crossing Juba River is composed of World Vision staff, led by the polio emergency response manager, Tobias Oloo, and community leaders. They are on the way to Hawalajiro village, to launch a polio vaccination campaign.

Ibrahim, his team of nurses, and the health workers travel to villages five days a week to treat children and mothers and to provide immunizations. Since a polio outbreak began in Somalia, the teams have been busier; they have to visit more villages to the beat the polio threat.

Polio re-emerged in Somalia in May 2013, when two cases were reported in a Mogadishu neighborhood. The country had been polio-free for six years.

The muscle-wasting virus that mainly affects young children has since spread to most parts of Somalia, though the largest number of cases has been reported in the hard-to-reach, south-central parts of the country. There is no known treatment for polio, making prevention through vaccination absolutely critical.

World Vision is working with government agencies, the World Health Organization, and other partners to reach as many children as possible under the age of 10 with vaccines. World Vision aims to vaccinate 100,000 children in the next six months.

The current polio outbreak is part of the bigger health problem facing Somalia, following years of conflict and natural disasters that have also broken down systems.

Since 2009, aid agencies have been unable to conduct mass vaccinations in southern Somalia due to conflict and inaccessibility, leaving millions of children vulnerable to polio and other preventable diseases such as whooping cough, diphtheria, and tuberculosis.

“Even without the conflict, there are communities such as Hawalajiro that are hard to reach,” says Tobias. “Owing to infrastructure challenges and long distances to be covered because many families are nomadic pastoralists, this polio vaccination [campaign] is a race against time.”

When the raft lands on the other side of the river, children and parents are gathered under a tree on a hot Wednesday afternoon. Mohamed Ibrahim, the head nurse and vaccination team leader, wastes no time; the team has more villages to cover before dusk.  Mohamed shows pictures of children affected by the disease and explains the symptoms and the importance of vaccination. Then the vaccinations begin.

Two-year-old Mohamud Hassan Omar is in his mother’s arms. She tells him to open his mouth, and he swallows the drops. Her name is Habibo, and she says she’ll make sure all the children in her village are protected by the vaccine.

“I am a mother of eight, and I am happy that all my children under 10 have received the vaccine. I cannot let them be affected like the ones we were shown in the pictures,” she says.

At the end of the day, more than 1,114 children were vaccinated in Hawalajiro and surrounding villages on the first day of the vaccination campaign.