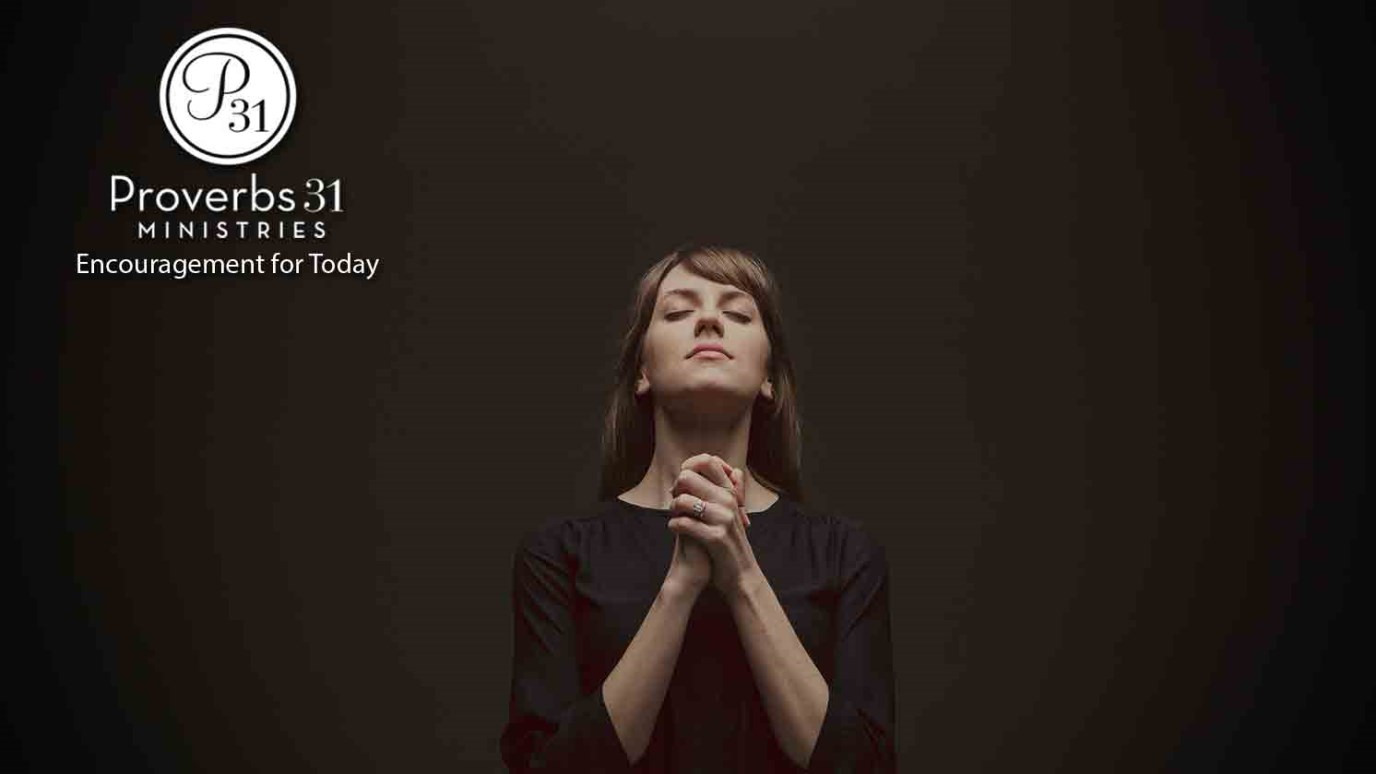 You're not the only woman to cry out to God in a prayer that makes her look half-crazy. Today’s key Bible verse describes another woman who did the same.

“In her deep anguish Hannah prayed to the LORD, weeping bitterly.” 1 Samuel 1:10 (NIV)

I once lobbed a meatloaf at my husband’s head in front of my children.

Having just returned home after a few days away, I found laundry looming over my head like Mount Everest and a family who’d existed primarily on Fruit Loops for the extended weekend. It was one of those “emotionally wealthy” times of the month for me. And my family was emotionally needy.

I decided to bake a cheese-stuffed, bacon-wrapped, barbecue-laden meatloaf to make all things right in the world. The first bite was almost to my mouth when my husband did the unthinkable — he mentioned the laundry. The meatloaf went flying, and there was no taking it back.

That’s when I noticed the fear in my children’s sweet eyes. (Proof to you, I hope, that I don’t often throw meatloaf or any other items — food or otherwise.) I did what any woman would do: I ran to the bathroom.

I wept bitterly. I was embarrassed by what I’d done and fearful it would ensure my children spent hours on a psychiatrist’s sofa.

As I began to pray frantically, my husband opened the door on his white-hot mess of a wife who was praying so hard she looked insane. He offered me his hand as if he were asking me to dance. When I accepted, he led me back to the kitchen table, pulled out my chair and seated me like a princess. He then delivered a comedy routine that to this day I say deserves to be on late night television, making this memory one of our family’s funniest. (Prayer answered!)

I’m not the only woman to cry out to God in a prayer that makes her look half-crazy. Today’s key verse describes a woman who did the same.

Hannah, a mother whose name makes it into the Bible, poured out her soul-breaking pleadings to God in such a way that she looked not just crazy, but drunk.

Eli, the priest, notices her.

This was a day and age of pretense and sophistication — not spontaneous, unveiled expression. The behavior of a woman in public was especially guarded.

But not for this woman.

The fear of man had fallen from her in her desperation.

The Bible says Hannah was praying so hard, her mouth was moving, but no sound came out. Distraught emotion distorts her expression.

Eli, the man of God, concludes: This woman has had too much wine.

“How long are you going to stay drunk?” he wrongfully challenges in 1 Samuel 1:14a (NIV).

Hannah claims she’s only drunk with the desire to be a mother.

And the man of God sees. As clearly as he sees the wet tears on her face, he sees the heart behind the guttural pleadings erupting from her soul.

And the peace comes. “She said, ‘May your servant find favor in your eyes.’ Then she went her way and ate something, and her face was no longer downcast,” (1 Samuel 1:18, NIV).

As I read the account of Hannah earlier this year, I felt a prayer of my own leap out from within me. I wrote it in the margin of my Bible: “Lord, make me drunk with prayer!”

I prayed what was really in my heart — the good, the bad, the ugly. After all, God already knew it was in there.

And you know what? It works. I feel peace after I pray like that. My problems aren’t always solved, but my heart is quieted. Maybe when the Bible says to “cast your cares” on God in Psalm 55:22, this is what it’s talking about.

Some people might misread and misunderstand you when you pray as fervently as Hannah did. But isn’t that the point of prayer? Isn’t prayer the tool of an audaciously optimistic woman? One whose faith rises above what her eyes tell her to be true? If prayer makes us anything, it should be radical.

Dear friend, God already knows what’s going on in your heart — the good, the bad, the ugly. Why not just pour it out?

Lord, I haven’t been bringing myself to You honestly. You know what’s inside of me and where the bitterness and anxiety rest. Please help me to pray like I mean it today, free of all pretense. I’ll trust You to sort it out. In Jesus’ Name, Amen.

TRUTH FOR TODAY:
1 John 5:14, “This is the confidence we have in approaching God: that if we ask anything according to his will, he hears us.” (NIV)

REFLECT AND RESPOND:
Take 5 minutes today and get really honest with God about what creates fear, anxiety and bitterness in you as a woman. Then let your anxieties and fears burst forth in prayer.

When God's Word Showed Up in My Prayer
Gina Duke

Overcoming the Barriers to Prayer: Get to Know God
Jeff Schreve
Follow Us
Grow Daily with Unlimited Content
Uninterrupted Ad-Free Experience
Watch a Christian or Family Movie Every Month for Free
Early and Exclusive Access to Christian Resources
Feel the Heart of Worship with Weekly Worship Radio
Become a Member
No Thanks