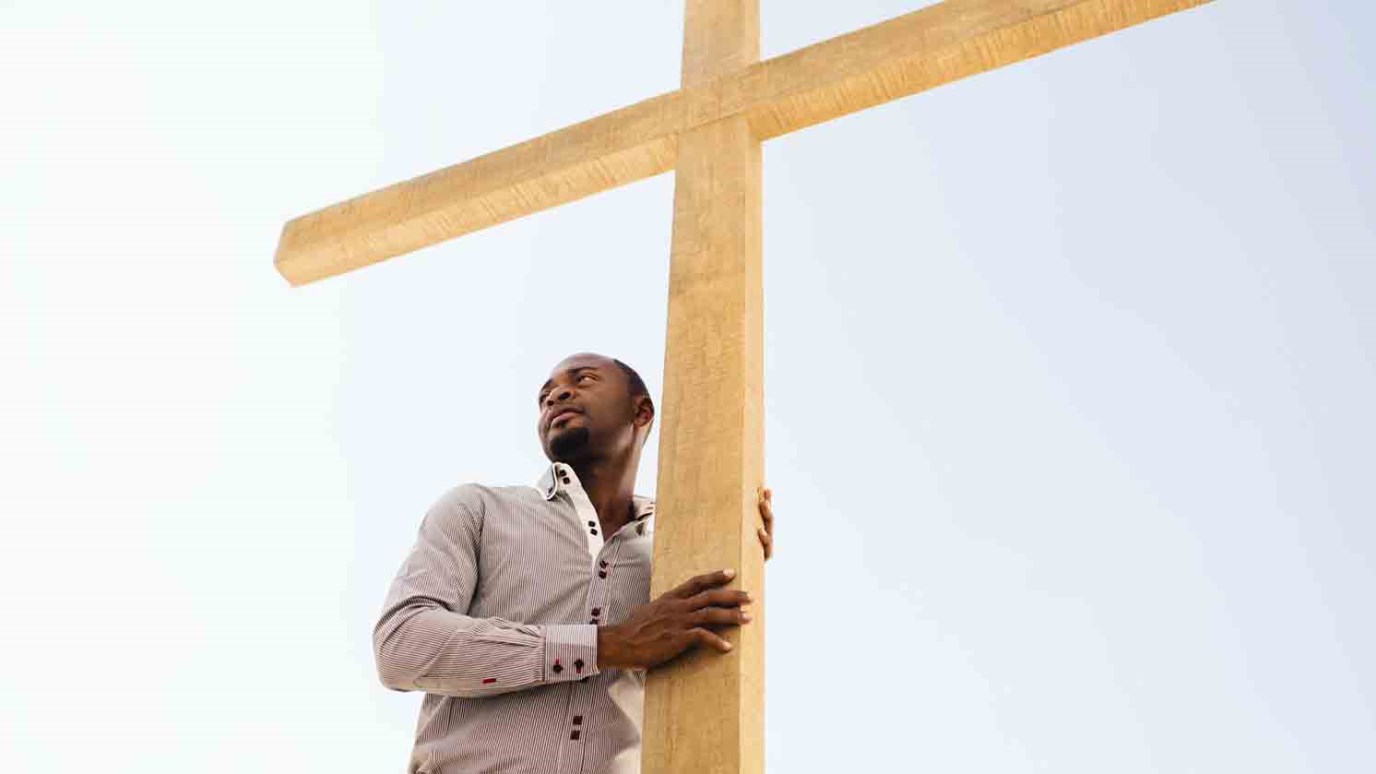 Surrounded by reasons to be despairing of humanity, there is yet the startling image and possibility of God as one of us: a fully human creator who gives us cause to reconsider our despair, One whose only brokenness was at our own hands.

The recognition of one’s humanity can be an uncomfortable pill to swallow. Life’s fragility, life’s impermanence, life’s intertwinement with imperfection and disappointment—bitter medicines are easier to accept. The Romantic poets called it “the burden of full consciousness.” To look closely at humanity can indeed be a realization of dread and despair.

For the poet Philip Larkin, to look closely at humanity was to peer into the absurdity of the human existence. Whatever frenetic, cosmic accident that brought about a species so endowed with consciousness, the sting of mortality, incessant fears of failure, and sieges of shame, doubt, and selfishness was, for Larkin, a bitter irony. In a striking poem titled “The Building,” he describes the human condition as it is revealed in the rooms of a hospital. In this vast building of illness and waiting, one finds “Humans, caught/On ground curiously neutral, homes and names/Suddenly in abeyance; some are young,/ Some old, but most at that vague age that claims/The end of choice, the last of hope; and all/ Here to confess that something has gone wrong./ It must be error of a serious sort,/ For see how many floors it needs, how tall…”(1)

With or without Larkin’s sense of dread, this confession that “something has gone wrong” is often synonymous with the acknowledgment of humanity. “I’m only human,” is a plea for leniency with regards shortcoming. In Webster’s dictionary, “human” itself is an adjective for imperfection, weakness, and fragility. There are, nonetheless, many outlooks and religions that stand diametrically opposed to this idea, seeing humanity with limitless potential, humans as pure, the human spirit as divine. In a vein not unlike the agnostic Larkin, the new atheists see the cruel realities of time and chance as reason in and of itself to dismiss the rose-colored lenses of God and religion. Yet quite unlike Larkin’s concluding outlook of meaninglessness and despair, they often (inexplicably) suggest a rose-colored view of humanity.(2) In the other side of this extreme, still other belief-systems emphasize the depravity of humanity to such a leveling degree that no person can stand up under the burden of guilt and disgust.

In deep contrast to such severe or optimistic readings, Jesus of Nazareth adds an entirely different dimension to the conversation. The divine and human Jesus brings before us the notion that while there is indeed an error of a serious sort, the error is not in “humanness” itself. In his own flesh, he provides a way for the great paradox of humanity to be rightly acknowledged: both the deep and sacred honor of being human and yet the profound lament and disgrace of all that is broken. So the Christian’s advantage is not that they find themselves less fallen or closer to perfection than others, nor that they find in their religion a means of simply escaping this world of fragility, brokenness, guilt, suffering, and error. The Christian’s advantage is Christ himself. The human Son of God mediates on our behalf, bringing us back to a full and forgiven humanity. We are, in Christ, re-humanized not dehumanized. In his life, death, and resurrection, Christ shows a world that has gone awry in light of God’s severe and merciful pursuit. In his vicarious humanity, we encounter our own.

“[H]umanity’s mystery,” as one writer expounds, “can be explained only in the mystery of the God who became human. If people want to look into their own mystery—the meaning of their pain, of their work, of their suffering, of their hope—let them put themselves next to Christ… If I find, on comparing myself with Christ, that my life is a contrast, the opposite of his, then my life is a disaster. I cannot explain that mystery except by returning to Christ, who gives authentic features to a person who wants to be genuinely human.”(3)

The author of these words was well acquainted with the paradox of human nature and the God who became human to bring the world to authentic humanity in Christ. Oscar Romero was a Salvadoran priest who saw the very worst and the weakest of humanity in the corruption, violence, and suffering of a country at war within itself. A witness to ongoing violations of human rights, Romero spoke out on behalf of the poor and the victimized. In both the abused and the abusers, he saw the image of God, glimpses of Christ, and the dire need for Christ’s true humanity. For these subversive outcries, Romero was assassinated in the middle of a church service. He was holding up the broken bread of communion, the very sign of Christ’s human body on earth, given for a broken and hungry world.

Surrounded by reasons to be despairing of humanity, there is yet this startling image and possibility of God as one of us, a fully human creator who gives us cause to reconsider our despair, one whose only brokenness was at our own hands. Christ is far more than someone who came to fix what was wrong. He is the image of all that is right, the bread of life for those who seek to be genuinely human.