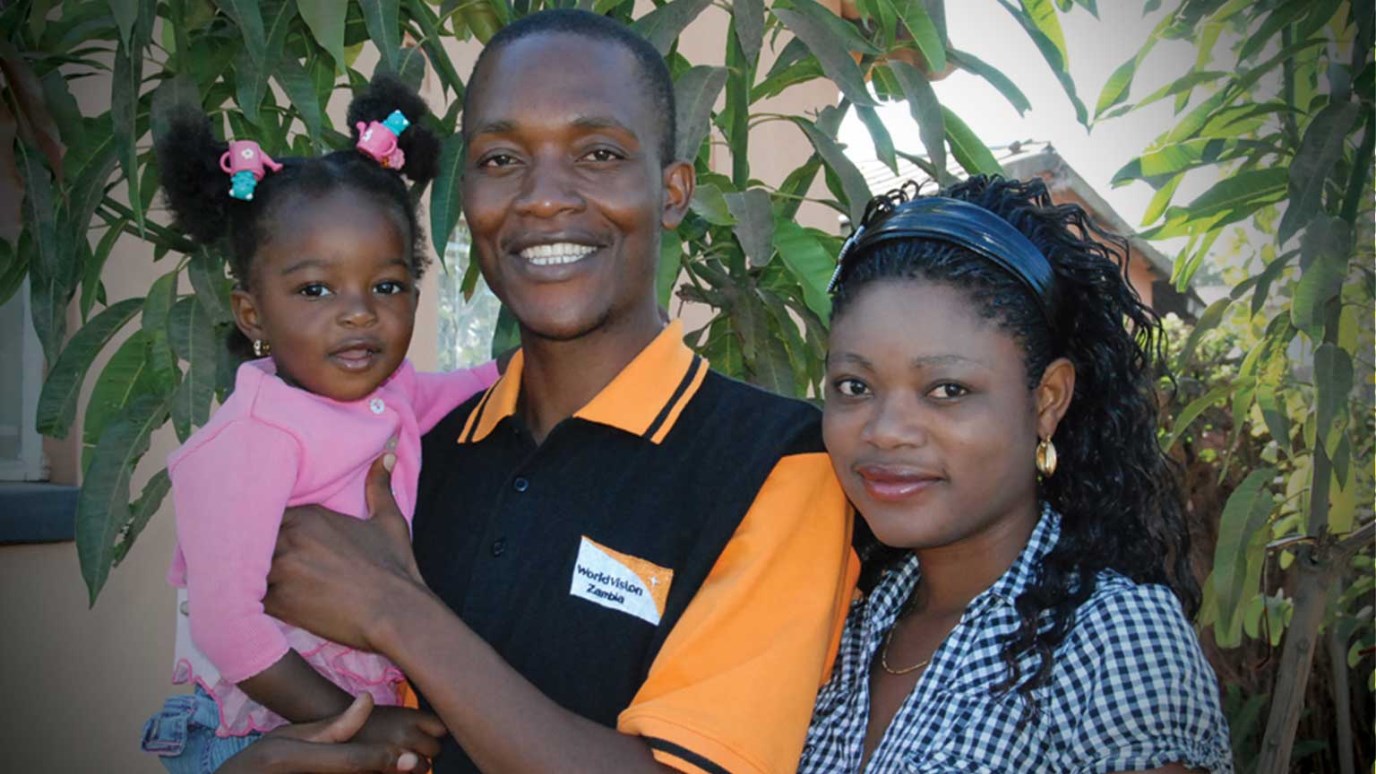 Together, we can save children’s lives. Collins Kaumba, a World Vision journalist in Zambia, shares about a difficult experience that continues to affect him -- and which makes him grateful for the ways he has been blessed by God.

Today's heartfelt reflection comes from Collins Kaumba, a World Vision journalist in Zambia (pictured above with his wife and daughter). While his job often involves gathering stories of hope, he is also routinely exposed to the pain and suffering caused by poverty -- a reality made all the more personal to him because of his own background. Collins shares about a difficult experience that continues to affect him and makes him grateful for the ways he has been blessed by God.

Recently, I visited a place called Chiwoma to do a story about malnutrition. I was meeting a 5-year-old child named Betty. My encounter with her gives me the chills, even now. I think about Betty, time and again.

Betty died a few moments after I had met her. I had not taken any photos, and wouldn't do so after she passed. The story just ended there. Betty’s mother and grandmother were sharing her story with me when it happened. We were at Betty’s bedside. They were in tears, wailing as Betty closed her eyes.

Betty died of malnutrition -- a slow killer, but a treatable and avoidable disease because we live in a world of plenty. I wondered how she could reach such a critical level. She died when her life could have been preserved. She is no more.

I joined her mother and grandmother in mourning; I could not hold my tears. Her story is just one that represents thousands of other children. Access to adequate healthcare, food, and medicine is a major problem confronting Zambians across the country.

Stories like Betty’s keep ripping through my heart. Questions keep popping up. I wonder why such deaths and illnesses continue to afflict innocent children, when we can do something to prevent or treat these diseases.

I am no stranger to long walks to get to a health clinic. My mum and dad raised me in a village where it's 30 kilometers (about 19 miles) to the nearest hospital.

My mum often has told me a story from a time in my life that I cannot remember. I would not be here today if it were not for God’s grace.

At a time when there were rebels fighting in our community, I became ill. I was so sick, the whole community thought I was dead. But my mum and grandmother refused to accept this.

Risking rebel attack, they decided to walk with me to the health facility at night. They were arrested by the rebels and were held until morning before they were released. The rebels realized that the baby they were carrying -- me -- was dying.

My mum and grandmother told me that God was by my side, and the missionary doctors saved my life. I was suffering from pneumonia. The disease had advanced, and I was near death. I'm thankful to God and the missionaries who had set up the hospital.

I think of this more and more lately. I shed tears when I think about not having the chance to live and be who I am today. That is what my reality would be without the effort and support of my parents and the missionaries who set up the hospital.

With great difficulty, my parents educated me. Mum had to brew a traditional beer called Lituku to pay my school fees. Dad had left the village in search of a job in town.

Food was equally hard to find because we could not afford to buy seeds. The rainfall pattern at times was also unfavorable. Some of my siblings became malnourished. Life was extremely difficult.

But things changed when my father found a job as a police officer. It was a great blessing for me. My family was able to move to the city and live a totally different life -- a life I never dreamed of before. It was a new world that gave me a chance to go to college and train as a journalist.

The story is long and the pain is strong as I continue to meet more children in rural areas who are like I once was. They have not been as fortunate as I was. For years and years they languish in poverty. Others are dying without anyone to help them.

Without the missionaries and my loving parents, I, too, would have continued to suffer or died.

Now, as a father and a husband, I wish the best for my family. I do not want them to go through what I went through. I do my best to protect my family, especially my daughter, from preventable diseases. I make sure she sleeps under a mosquito net, eats nutritious food, wears warm clothes, and accesses quality health services at some of the best hospitals in Zambia.

This is a privilege that I have, and I am very thankful that God has given it to me. This is why I try hard, even where things seem impossible. I want to do whatever I can to reach the child and mother whose story needs to be communicated for someone out there to hear their small voice. World Vision has granted me such an opportunity, and I love my job.

But I still wonder every day why children should die so young from preventable diseases when there should be equal opportunities to access healthcare services.

The need is great, but those willing to assist are few. This is why I keep thanking World Vision donors for their support. I salute them, because their contribution -- regardless of what it is -- makes a big difference. Together, we can save children’s lives. God bless.