Marriage Is a Three-Legged Race 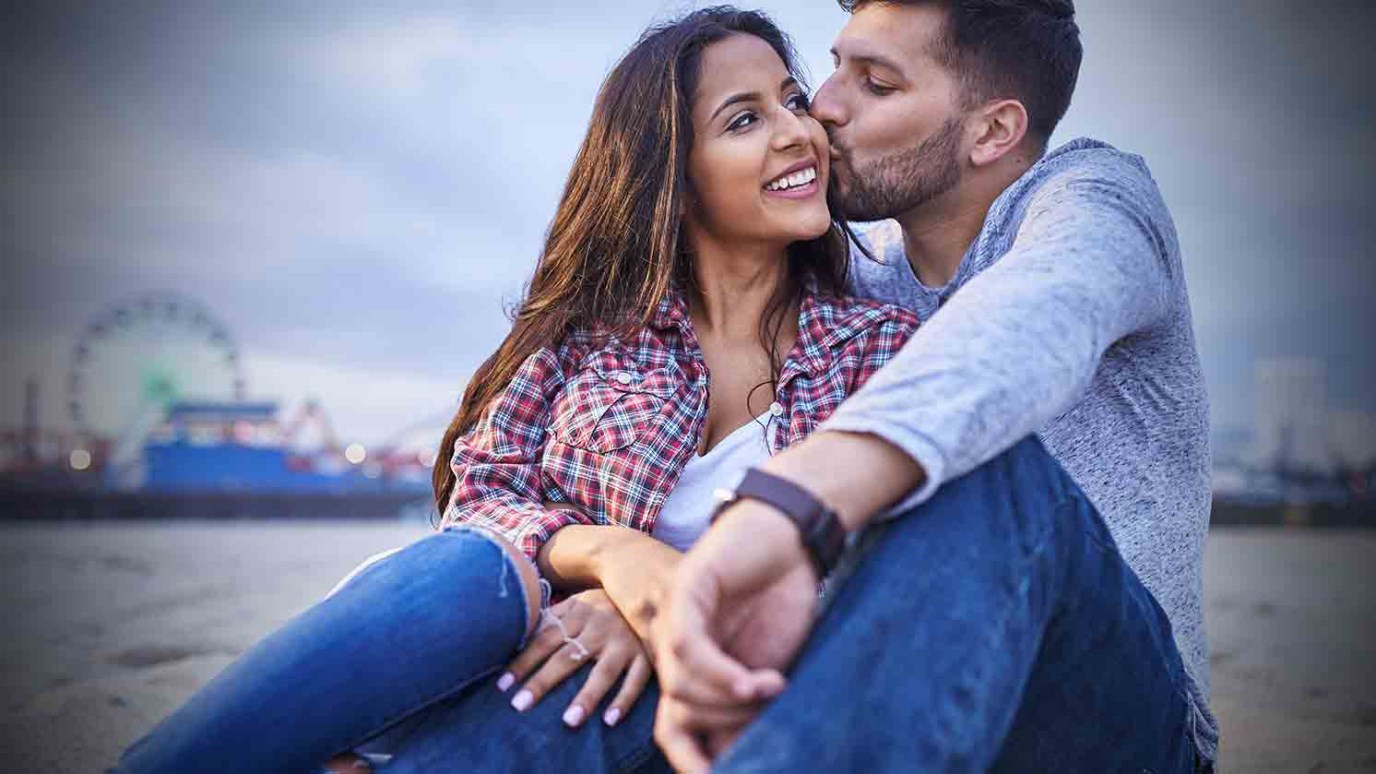 These oneness-building suggestions will help you cross the finish line in first place.

Among my precious childhood memories are the family picnics held every summer. I played all kinds of games with my cousins, including the three-legged race, which was everyone's favorite. Moms, dads, aunts, uncles, and grandparents gathered around to watch all of the children pair off.

To make the game more interesting, partners were tied together so one faced backward and the other forward. The starter gave the signal, and what happened next is best described as chaos. Everyone would cheer as the forward-facing participants would half drag, half carry their backward-facing teammates toward the finish line. There were always plenty of grass-stained knees, piercing screams, and roars of laughter.

But occasionally we ran the race in a different way. Instead of facing opposite directions, each pair faced in the same direction. Even when facing the same direction, the three-legged race was difficult, but at least partners could work together. Locked arm in arm and stepping in unison, they made rapid progress toward the finish line. They might still stumble and fall, but they always got there faster and more efficiently.

Marriage is a lot like the three-legged race. You can run it facing in the same direction and try to stay in step with your partner, or you can run in totally different directions and stumble and fall. You can build oneness in your marriage relationship, or you can move toward isolation.

Here are three ways you can move toward oneness:

1. Make plans to get away to dream, plan, refresh, and refuel.

Do you remember the jingle from the hamburger stand with arches that went, "You deserve a break today"?

By tweaking that jingle, (which now you probably will not be able to shake out of your head for hours!), I can give every couple a message worth remembering: "Your marriage deserves a break today!"

How long has it been since you spent extended, focused time with your mate? Not just an evening at a fantastic eatery, but a couple of days away from your usual environment to catch up with each other? In too many marriages, the demands of the ordinary grind seem to overwhelm the possibility of extraordinary excitement.

Because of our fast-paced culture, we need to pause once or twice a year to rest, count our blessings, and dream some dreams. When our kids were still at home, Barbara and I would regularly take what we called planning weekends, an opportunity to evaluate our marriage and parenting and, if necessary, redirect plans.

Even though our kids are grown now, we still make it a point to get away together on a regular basis. The getaway is effective in keeping our communication current, and it's just plain fun. Without any of the everyday distractions, we can concentrate on romancing each other. I can give Barbara flowers and speak tender words. She can give me undivided attention as I unwind and share from the heart. We can stay up munching snacks, listening to music, or talking and not have to get up in the morning to meet a demanding schedule.

2. Focus on pleasing your spouse.

Pleasing your mate is a command of Scripture. Romans 15:1-3 reads: "Now we who are strong ought to bear the weaknesses of those without strength and not just please ourselves. Let each of us please his neighbor for his good, to his edification. For even Christ did not please Himself." There are three key phrases here.

First, we should "not just please ourselves." God has not put us here merely to satisfy our own wants and needs. But in narcissistic America, we're being bombarded daily with advertising that entices us to satisfy ourselves.

Second, "Let each of us please his neighbor for his good." Who is your closest neighbor? Your spouse. So you are to please your spouse for his or her particular good.

Finally, consider the phrase, "For even Christ did not please Himself." What did Christ seek to do? He gave Himself up and died so that we might live!

The purpose of Christ's giving Himself up is found in the little phrase, "to his edification." This is the concept of building another's self-esteem. Biblically speaking, edification means to build one another up, to let the Word of God dwell in another person's life so that he or she can become a complete person. Pleasing your mate defeats selfishness.

In Philippians 2:3-4, we read: "Do nothing from selfishness or empty conceit, but with humility of mind let each of you regard one another as more important than himself; do not merely look out for your own personal interests, but also for the interests of others."

I am convinced that great marriages and great families are rooted in self-denial. In a truly biblical, Christian marriage, both people are willing to give up their lives for one another in order to love each other properly. What but the love of your mate would make you give up your favorite sport or recreation?

During the early years of marriage, I remember looking in the rearview mirror of the car as I pulled out to go fishing with several of our children one Saturday. Barbara was standing on the porch, left with a couple of kids in diapers while I went off to the lake with the older kids to have a good time.

While I was sitting out in that boat, not catching anything, I continued to think about Barbara. You know, I am pleasing myself, but I have not done a good job of pleasing her. I realized I needed to give up some of my hobbies for a while in order to please her and reduce her burden. But you know what happened? Once the youngest kids grew older and Barbara's burden began to lift, she began to encourage me to fish and hunt with the children. When I left the house on one of these trips, I would look in the rearview mirror and see her on that same porch, waving good-bye with a smile.

3. Make forgiveness non-negotiable in your relationship.

Over the years I've admitted to just about everyone in our family that I've been wrong on many occasions, and of course Barbara has heard me say it more than anyone. It's liberating to admit you're wrong, and it's even more liberating when the other person forgives you.

You can't improve on the way Paul put it when he said, "Be gentle and ready to forgive; never hold grudges. Remember, the Lord forgave you, so you must forgive others."(Colossians 3:13, Living Bible). To practice this advice means oneness, to ignore it means isolation.

The first step is the hardest—admit you're wrong and ask forgiveness. Both sexes can have trouble with this one, but in marriages I've seen that the edge goes to the men. The celebrated "male ego" is all too real and it's just hard for us husbands to say, "I was wrong, I'm sorry. Will you forgive me?"

During the first years of our marriage, I struggled to admit I was wrong. When I did I would often say, "If I was wrong when I did this, I'm sorry." I would admit there was a remote possibility I could have been wrong, but an all-out confession was out of the question.

After all, it seemed to me that there were really few times when I was totally wrong. Asking forgiveness when you're 100 percent wrong is one thing, but what about the times when you're 60 percent right and only 40 percent wrong? During the first years of our marriage, the 60/40 situations seemed to come up regularly and I seldom wanted to admit that I was wrong.

My attitude was childish, of course, but I couldn't see it then. It's amazing how many spouses behave like little kids who try to weasel out after getting caught with their hands in the cookie jar.

At one of our conferences, a man boasted to me saying, "You know, I've been married for 24 years and I've never once apologized to my wife for anything I've done wrong."

"Oh, really?" I said, with a tone that urged him to tell me more.

"Yeah," he said with obvious pride. "Every time we get into a squabble or any kind of disagreement, I just tell her, 'I'm sorry you're mad at me.' I don't admit anything—I just tell her it's too bad she had to get so mad."

Then, with a grin he admitted, "And all these years she's never realized that I have never once apologized."

I tactfully attempted to explain to this husband that he was dead wrong. Unfortunately, he wouldn't listen. He went on his way quite sure he was a very clever fellow, but I wonder if he really sleeps that well.

As difficult as it is to ask for forgiveness, it's equally hard to grant forgiveness when you have been wronged. If you can't forgive until your spouse asks you for forgiveness, your conflict may go on far longer than either of you want it to.

I often advise married couples to take out a joint membership in the "Seventy Times Seven Club." Christ formed that club when Peter asked him how many times we are to forgive one another. Peter wondered if seven times would be enough. Christ answered, "No—seventy times seven!" (Matthew 18:22).

In other words, forgive an infinite number of times, not just when you feel like it. By an act of your will, you must put away resentment and the desire to punish the person who has wronged you.

You can tell if you have forgiven your mate by asking one question: "Have I given up my desire to punish my mate?" When you lay that desire aside, let it go, and no longer seek revenge, you free your spouse, and yourself, from the bonds of your anger.

And you take one more step toward strengthening the oneness in your marriage.