Make a World of Good: Do Something! 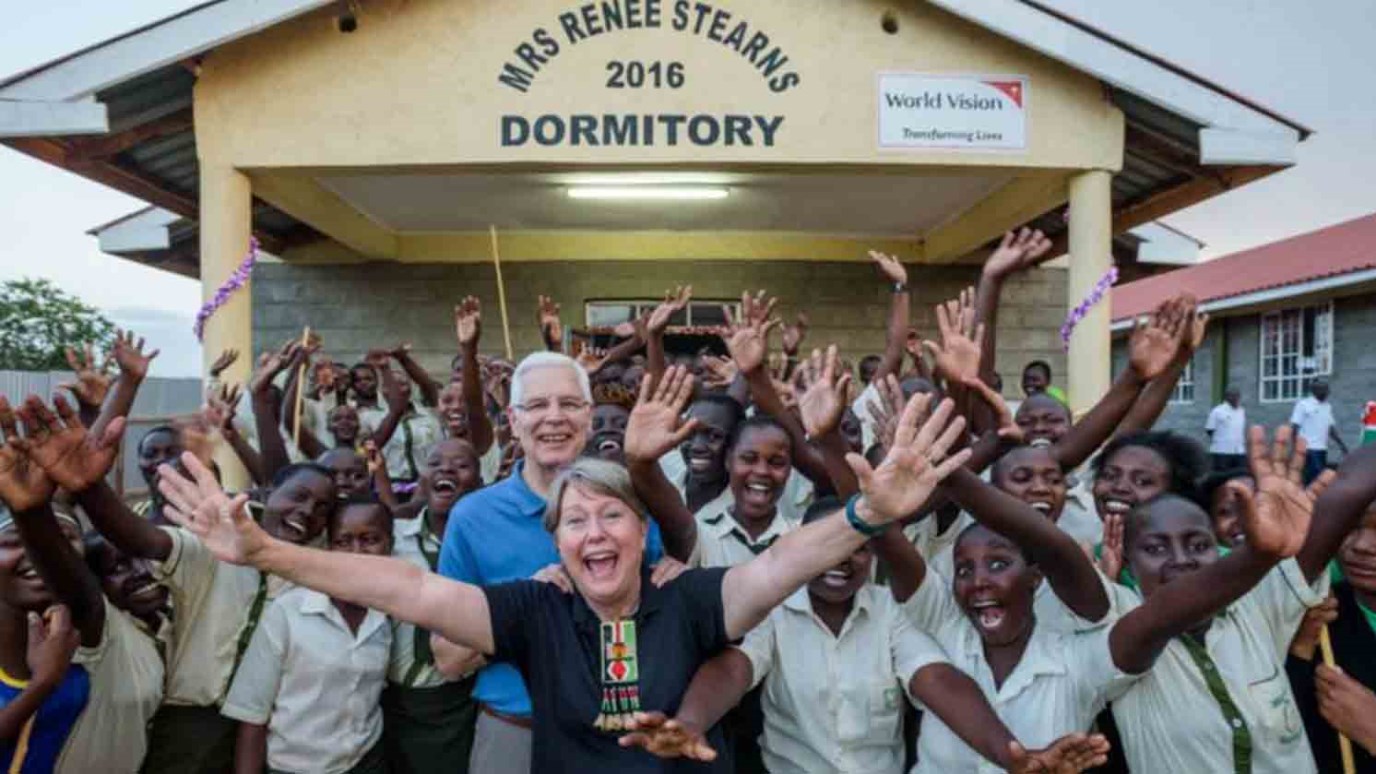 Rich and Reneé Stearns visit a new dormitory named for Reneé in Kenya.

While kids in the U.S. are getting ready to go back to school, we bring you a reflection about how a very special school in Kenya is making a world of good for girls escaping harmful cultural practices such as child marriage.

When Reneé Stearns visited St. Elizabeth Secondary School for Girls with her husband, World Vision U.S. President Rich Stearns, she was surprised and honored to find a dormitory dedicated in her name. Reneé, the mother of three grown daughters, saw firsthand the impact this school has had on young women who otherwise wouldn’t receive an education.

And it’s all because one American woman decided to do something to help hundreds of Kenyan girls have a better life.

These were the instructions Jon Warren gave us as we assembled for a group photo to commemorate the dedication of a new dormitory at the St. Elizabeth’s Secondary School for Girls in West Pokot, Kenya. Jon is World Vision’s award-winning photographer, so when he gives directions, we listen. This wouldn’t be a formal, static shot of the building with students assembled in neat rows in front. Jon wanted something that would express our excitement over the opening of what, that very evening, would become the home of over 90 high school girls who attend this amazing school.

Even as I threw my hands in the air, I thought about those two simple words: “Do something!” It occurred to me that this picture would not be possible if it were not for the choice World Vision donor Margo Day made in 2009 to follow Jon’s good advice. Margo is an executive with Microsoft who — when she saw the need to protect and educate girls escaping female genital mutilation, also known as cutting, and child marriage — decided to do something about it.  In partnership with World Vision, she provided funds to build a school that now serves 370 girls. Many have escaped from the cultural practice of female genital mutilation. Many have escaped child marriage. St. Elizabeth’s Secondary School for Girls is a place they can be free.

Of course, not everyone can match Margo Day’s generosity, but, believe it or not, everyone can do something, even if that something might seem inconsequential in light of the great need all around us.

Jesus praised the widow who dropped two very small copper coins into the offering box. He acknowledged the woman who broke a jar of oil over his feet and wiped them with her hair, saying, “She did what she could.”

In the face of the world’s overwhelming problems, our natural temptation is to believe we have little to offer. The boy who had five loaves of bread and two fish might have felt the same. But instead of keeping his sack lunch to himself, he offered it to Jesus, who in turn used that small meal to feed 5,000 people.

What if we followed his example? What if we offered Jesus what we have: our time, our prayers, our efforts, our money? Trusting that he can do with our small offering what he did with that little boy’s lunch. Trusting, like Margo Day, that he can use it in some way to transform a life.

If we all did what we could, a young girl might be spared female genital mutilation or a forced child marriage to a man several decades her senior. She might become a doctor or a teacher because she has the opportunity to receive an education at a school like St. Elizabeth’s.

Let’s not make the mistake of doing nothing because we can only do a little. Just like Jon says, we all need to “do something!” It’ll make a world of good. Just ask Margo Day and the girls at St. Elizabeth’s.

Reneé Stearns is a former attorney, mother of five, and grandmother of five. She is active in church ministries, leading Bible studies, and speaking at conferences and retreats. Reneé is passionate about helping others broaden their worldview to include the great needs she sees in her travels with World Vision with her husband, World Vision U.S. President Rich Stearns. With Rich she co-authored two books, He Walks Among Us: Encounters with Christ in a Broken World and a children’s Bible storybook, God’s Love For You.