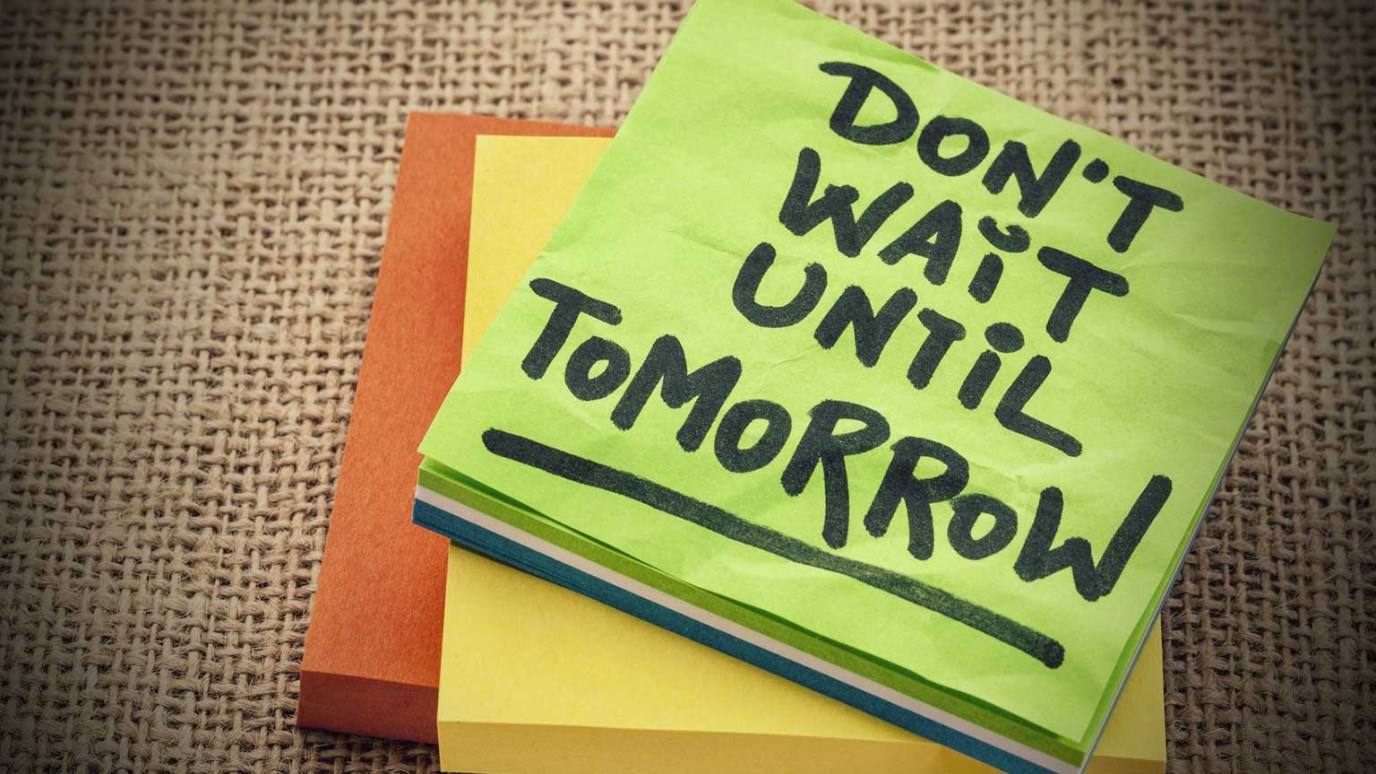 Procrastination works until the deadline arrives. Ask God to help you discern why you procrastinate. Dave Meurer shares a story about a time when one of his children procrastinated.

“And if your child does not complete his senior project, he will not be permitted to graduate,” said the teacher.

All the parents who had gathered at the Parent/Teacher conference immediately made the high school senior project the highest objective in life, surpassing retirement plans and world peace.

The teacher continued her grim lecture while all the parents took notes with the intensity and precision of court reporters. The students, on the other hand, showed the same interest they would have devoted to a boring infomercial.

“The senior project is due May 3rd, and no project will be accepted late. You are now dismissed.”

As the weeks rolled on, I would periodically check with my son, Mark, about his project. He would invariably reply with some vague comments that implied progress but without quite asserting that he had actually begun. I finally did extract from him the plan for the project: a large mural painted in the style of Vincent Van Gogh.

“Just remember, you can’t leave this until the last minute,” I said in the second month of school.

I decided to simply leave the subject alone and let him deal with it. After all, he was almost a legal adult and would surely rise to the occasion.

We were having dinner three days before the project was due when Mark’s eyes suddenly grew wide and he said, “Whoa! I have a massive senior project due! Do you have all the paints I need?”

I went into full-blown parent mode: “You’ve had this deadline for months! What part of this is a surprise? This kind of procrastination won’t work in the real world!”

It was a frenetic and messy 72 hours, but he got the project turned in on time.

A few weeks later, he popped his head into my office late one evening as I was furiously typing away.

“Working kind of late, aren’t you?” He asked.

“Oh, I just got a bit behind on this deadline …”

“What?” he replied, grinning widely. “You had this deadline for months! What part of this is a surprise? This kind of procrastination won't work in the real world!”

He messed up my hair and bolted from the room.

Why do we do this to ourselves? Why do otherwise rational people procrastinate? The reasons can range from simple laziness to deep-seated fear. It can be a legitimate matter of setting priorities, but it can also be a spiritual issue begging to be addressed. Ask God to help you discern why you procrastinate and for His assistance in finding a calmer pace of life today.

How To Not Be Overwhelmed At Home
NewSpring Church