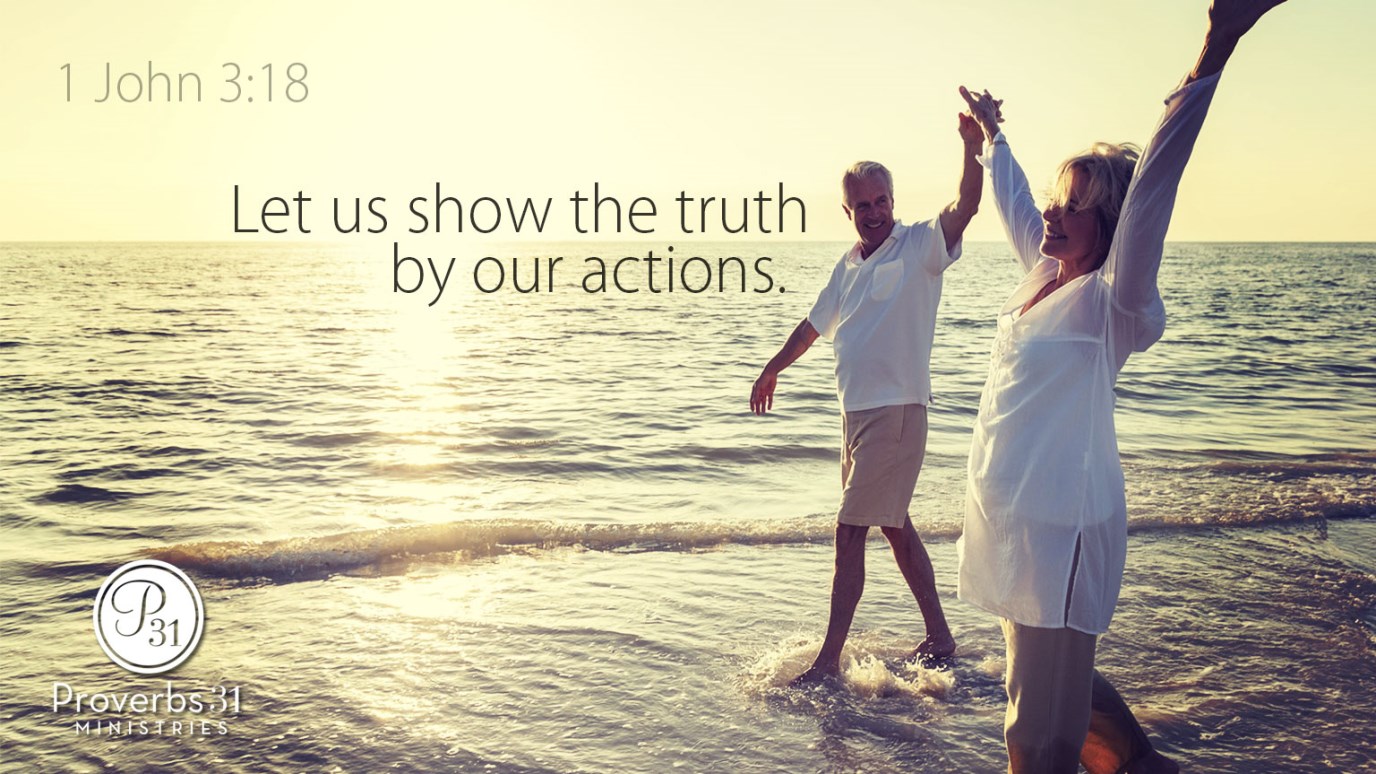 Lysa TerKeurst shares an incredible story of a man who believed that love isn't just something you say...

"Dear children, let's not merely say that we love each other; let us show the truth by our actions." 1 John 3:18 (NLT)

Grace looked up from the old, worn photo album to see Richard the postman making his way through the cold to her door. What a sweet young man, she thought.

Grace loved her walks to the mailbox in late spring and through the summer, but the cold winter air seemed to whip through her thin skin. Though in her heart she still felt like a young, energetic girl, her age was evident to her. Aches and pains made her careful and slow. As the air turned cooler, Richard made it a habit to deliver Grace's mail to her door.

Today was an especially lonely day for Grace. It was the seventeenth. No one but her Jim would have known what a special day this was. It wasn't her birthday or their anniversary. For forty-two years the seventeenth of every month was their unique day, as Jim would say, just because.

Though they never were rich with money, they were determined to be rich with love. For this reason, on the seventeenth Jim always found some special way to say it and live out 1 John 3:18, "Dear children, let's not merely say that we love each other; let us show the truth by our actions."

Over the years the gifts had been as simple as a scribbled note or as elaborate as a bouquet of store-bought flowers. But the message was always the same: "Just because." Once he'd secretly taken Grace's wedding band from her jewelry box and had it engraved with their special saying.

She found such comfort, confidence, and connection in those two simple words. To Grace it was more than a gesture of love, it was an outward symbol of much more.

When she'd gotten sick and couldn't keep up with the house, it meant I love you for who you are not what you do. When they had an argument, it meant even when we don't see eye-to-eye I love you still. When she started aging, it meant yours is a timeless beauty. Though Jim had never been a man of many words, his just because was perfect and poetic to Grace.

Jim had passed away three weeks ago. It wasn't a sudden death; they both had known his end was near. They'd had a sweet time of reminiscing, hugging, crying, and then as quickly as he came into her life all those years ago, he was gone. She missed him terribly but had peace.

They'd had a wonderful life and left nothing unsaid. Now Grace loved flipping through their old photo albums savoring pictures, but even more so she loved touching all the mementos from over the years written in his masculine handwriting.

Though she'd seen the postman coming, the doorbell startled Grace. Carefully, she made her way to the door. She graciously took the few letters he handed her and apologized for not having cookies. Maybe tomorrow. She then walked slowly to the kitchen to open her mail. A bill, another sympathy card, and something that made her heart jump and melt all at the same time.

Her eyes filled with tears and her hand trembled as she slid her finger underneath the envelope's back flap. It was a simple letter as they always were, delivered on the seventeenth as they always had been. Before his death, Jim had arranged for Richard to make one last special delivery. "Not even death shall stop my heart. Just because, Jim."

Sometimes a short story illustrates a point better than pages of instruction on how to have the perfect marriage. This kind of love — not flashy but forever; not commercial but committed — is truly honoring to the Lord and to your spouse.

I pray this story settles into your heart. That it reveals something to you about the heart of your loved one. Because even the smallest things can bring the greatest joys.

Dear Lord, I am so thankful for who You are – the Great Lover of our souls. Cultivate in me a heart of generosity and intentionality so Your love can shine through me into my relationships. In Jesus' Name, Amen.

Reflect and Respond:
What relationship is the Lord calling you to be intentional with?

Think of how you could make that person feel truly special. Then, write five things that you could do to help foster this relationship.

Power Verse:
1 John 4:7, "Dear friends, let us love one another, for love comes from God. Everyone who loves has been born of God and knows God." (NIV)

"You Complete Me" and Other Ridiculous Ideas About Love
Dr. Michael Smalley

The Mystery of Oneness
Great Commandment