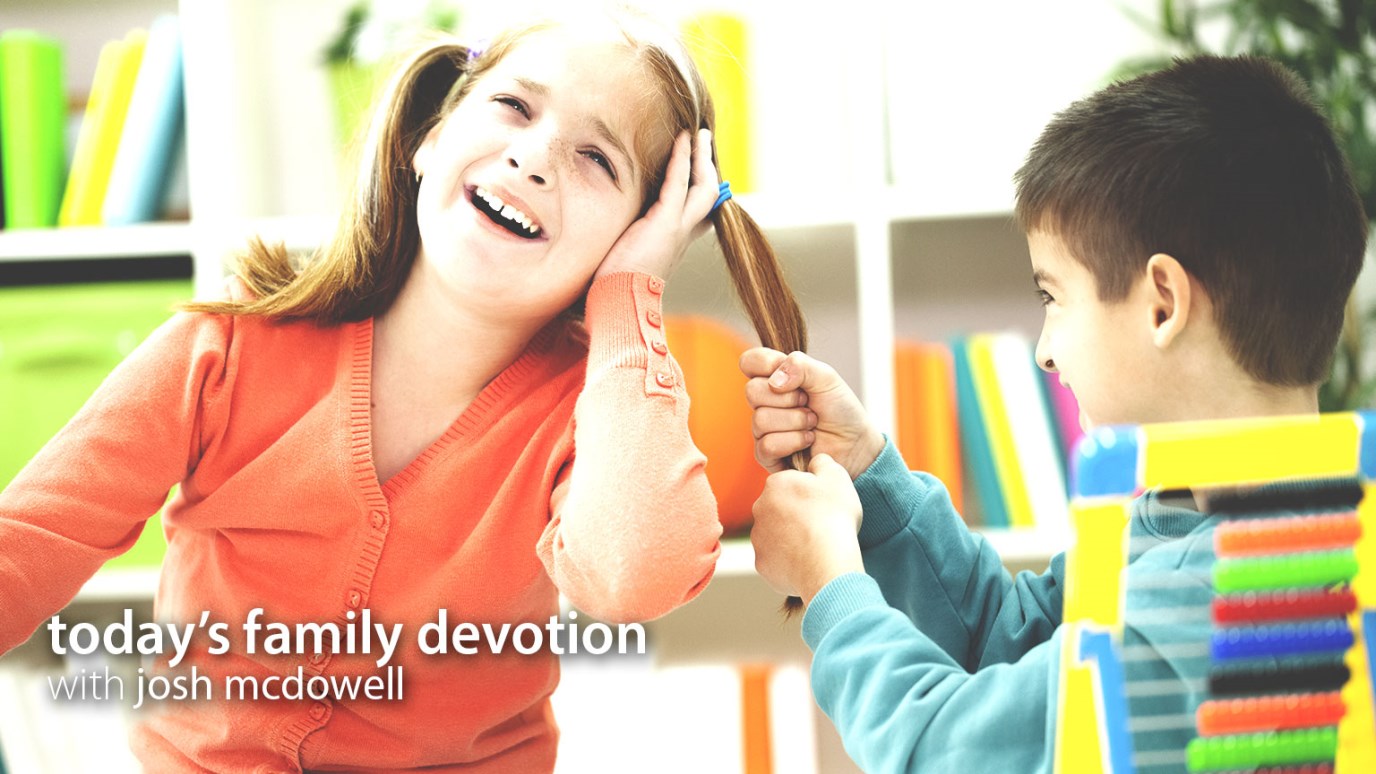 Verse of the Day: “Don’t sin by letting anger gain control over you. Think about it overnight and remain silent” (Psalm 4:4).

“Ow!” Jodie cried. She gripped her left arm with her right hand and glared at her brother, who had just snapped her with a rubber band. Suddenly, she let out a bloodcurdling scream in the middle of the library.

Jodie’s mom, who had recognized her scream, came running. “Jodie,” she said, picking up her little daughter and holding her in her arms. “Are you hurt?”

Jodie screamed and cried, and Mom became frantic. She turned to her son Mark. “What happened?” she asked, trying to talk over Jodie’s loud sobs.

Mark flashed his mom a guilty look. “I just hit her with a rubber band,” he said.

Mom grabbed the rubber band out of Mark’s hand, then took Jodie to the women’s restroom. Once inside, she set Jodie on the sink.

Jodie stopped screaming. Her face was red and streaked with tears. Mom held up the rubber band. “Did Mark snap you with the rubber band?” she asked. Jodie nodded angrily and looked as if she wanted to scream again. “Did that make you angry?” Jodie pursed her lips and nodded her head.
“What Mark did was wrong,” Mom said. “But what you did was wrong too.”

Jodie looked confused. “It… it was?”

Mom nodded. “It’s not always wrong to be angry. Sometimes you can’t help it. But even if you get angry at someone, God still wants you to be self-controlled.”

Mom nodded toward the library outside the restroom. “Out there,” she said, “when you started screaming, you were letting your anger control you. That’s not good. God wants you to learn to control your anger.”

“I know,” Mom answered. “And he was wrong to do that. But don’t you think you could have done something else instead of screaming?”

Jodie nodded. “I could have told you.”

Mom smiled. “That’s right. If you had done that instead of screaming, you would have shown me that you’re getting to be a big girl who can control her temper.”

TO PRAY: “Lord, it’s so easy to let our anger get out of control. Remind us, Lord, that we can choose to control our anger, rather than letting it control us.”

Bring the Children to Me
Dr. Ralph Douglas West
Follow Us
Grow Daily with Unlimited Content
Uninterrupted Ad-Free Experience
Watch a Christian or Family Movie Every Month for Free
Early and Exclusive Access to Christian Resources
Feel the Heart of Worship with Weekly Worship Radio
Become a Member
No Thanks