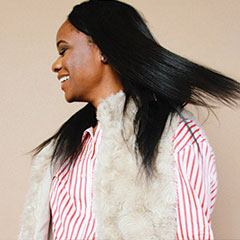 God’s Presence is in the Process.

We are in week 4 of going through the Old Testament. Jump in with us by downloading the weekly guide for spiritual growth and reading the article below.

If you’re not currently “in the middle,” I’m here to break news to you: The middle is on its way. Eventually, you will have to move from point A to point B and the only location in between the two points is, “the middle.”

I believe that “in the middle” is a painfully purposeful place to be but a process that we cannot escape. God shows up most evidently when we are “in the middle” because it’s when we become aware of our desperate need for Him. Typically, when we find ourselves “in the middle,” we beg God to do everything in His power to get us out of the position we’re in, mainly because it’s uncomfortable, unwanted, and oftentimes utterly painful. But I think God is more concerned with increasing our faith than He is with rescuing us from the very situation that will increase our faith.

When Shadrach, Meshach, and Abednego (Daniel 3) got thrown into the fiery furnace, many would have expected God to rescue them from the fire, but God didn’t do the expected. God never does the expected. Remember, His ways and His thoughts are higher than ours (Isaiah 55:8-9). In Isaiah 43:2, God promises that even when we go through the fire, we will not get burned, but He does not promise that we won’t feel the heat.

Instead of rescuing Shadrach, Meshach, and Abednego from the fire, God saw the fire as a means to display His faithfulness and therefore allowed His servants to stay where they would feel the heat. If God has you “in the middle” right now and you’re starting to feel the heat, the pressure, and the tension — don’t give up!

While we oftentimes see the middle as mundane, God sees the middle as a setup for a miracle. What if the miracle we’ve been begging for is actually found “in the middle” and not in the destination? What I’ve come to find to be true is that Heaven always responds to faith.

In Daniel 3, King Nebuchadnezzar orders for the heat of the furnace to be increased seven times greater because Shadrach, Meshach, and Abednego refused to bow down to him. Scripture says a fourth man appeared in the furnace with the three who were originally thrown in. A fourth man? King Nebz was in utter confusion, as he only threw three men into the furnace. Who could this fourth man be?

Catch this: God didn’t get Shadrach, Meshach, and Abednego out of the fire, because God wanted to get “in the middle” of the fire with them. Sometimes God’s way of rescuing us is not merely taking us out of our heated situations, but instead being with us as we endure through our heated situations. The enemy would love for us to believe that difficult situations equal the absence of God. It’s a lie. Even in my difficulty, God is never dormant.

God’s Presence is in the Process

Keep diving deeper into the Old Testament with us by downloading our weekly guide.