Humble Yourself to Truly Believe 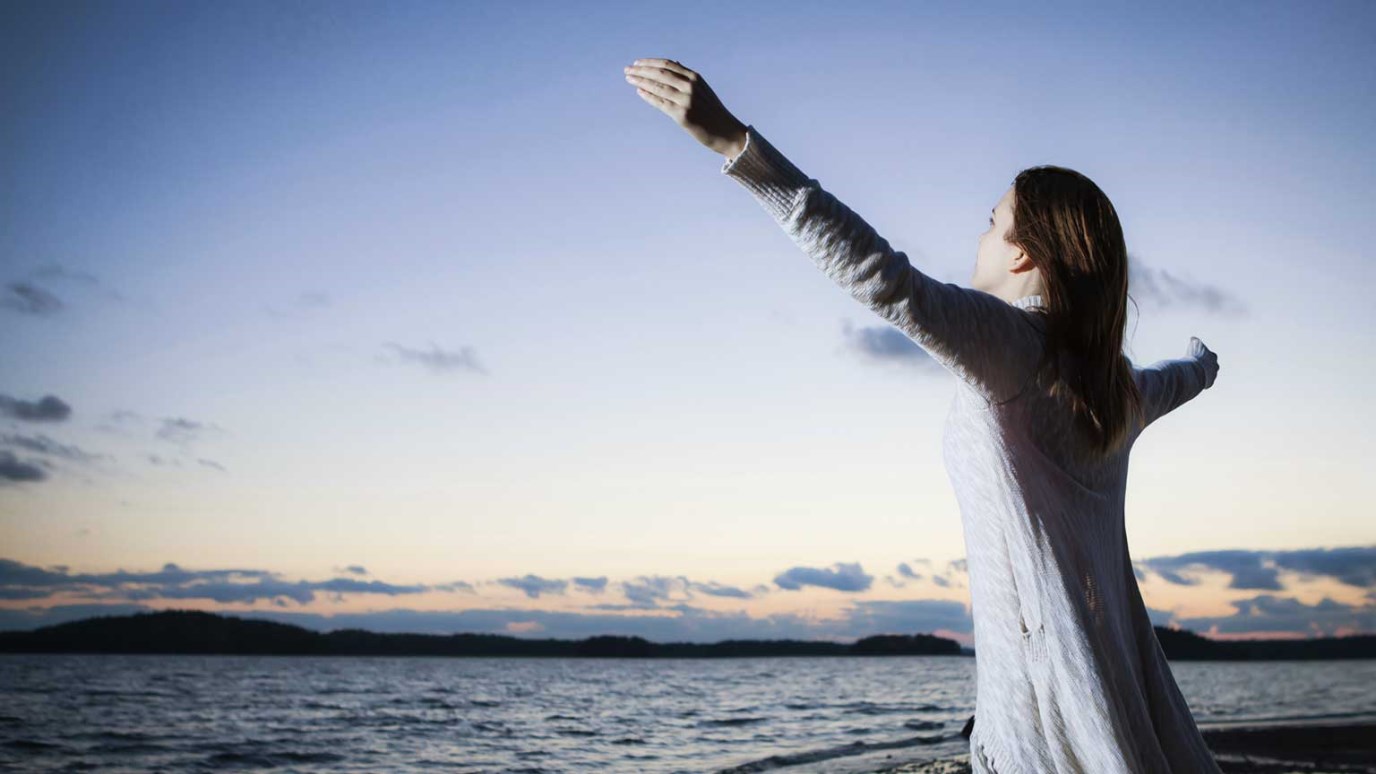 Do you want evidence for the supernatural origin of the Bible? God, in His great wisdom, has deliberately chosen seemingly foolish things to confound those who think they are wise.

When asked the question, “Is there a God?” Bill Maher replied, “I think there is . . . I’m not an atheist. There’s a really big difference between an atheist and someone who just doesn’t believe in religion. Religion to me is a bureaucracy between man and God that I don’t need. But I’m not an atheist, no. I believe there’s some force. If you want to call it God . . .I don’t believe God is a single parent who writes books. I think that the people who think God wrote a book called The Bible are just childish. Religion is so childish . . . These myths, these silly little stories that they believe in fundamentally, that they take over this little space in Jerusalem where one guy flew up to heaven—no, no, this guy performed a sacrifice here a thousand million years ago. It’s like, ‘Who cares?"

While Bill Maher is not so foolish as to be an atheist, he does believe people who think God wrote the Bible are childish because it is full of “myths” and “silly little stories.” His attitude is understandable and very predictable. It’s understandable that you and I can make a wrong (and sometimes unwise) judgment if we don’t see the whole picture. Often, all it takes is one piece of information —a missing puzzle piece that enables a picture to make sense.

For example, I recently had dinner at a high-class restaurant in North Carolina. While waiting for the meal to be served, I noticed a large rectangular steel plate sitting right in the middle of the table. It looked out of place, but I didn’t want to seem stupid by asking why it was there, so I simply reached out and touched it with my finger. The moment my finger burned, I understood that it was a hot hotplate, heated to keep hot plates hot. Had I noticed the lighted candle under it, I probably wouldn’t have been so stupid as to touch it.

Here are some stories that may cause you to make a wrong and unwise judgment: Adam and Eve, Noah’s ark, Jonah and the whale, Sampson and Delilah, Moses and the Red Sea, Joshua and the walls of Jericho, Daniel and the lion’s den. Do you believe the events in those stories actually happened? Before you answer, let me pass you the missing puzzle piece.

God, in His great wisdom, has deliberately chosen seemingly foolish things to confound those who think they are wise. Who would believe such childish stories? Certainly not those who have any pride or intellectual dignity. God has made the door of salvation so low that only those who are prepared to intellectually humble themselves can enter.

This incredible biblical principle was clearly illustrated years ago when I ran a children’s club. I told about one hundred kids to line up for free candy. As I looked at the line, I noticed that the big bullies had pushed their way to the front of the line and the quiet, meek, and sickly children were at the other end. So I told the kids to do an about-face. Then I took great delight in going to the other end of the line and giving candy to the quiet, meek, and sickly kids first.

In a world where bullies push their way to the front, where the rich and powerful stomp on the poor and weak, God has turned the line around. He has chosen seemingly foolish things to confound the wise. He has made it possible for the loser to become a winner, for the underdog to defeat the bully.

Consider the biblical story of Naaman, the proud captain of the Syrian guard. Unfortunately, he developed leprosy, a disease that rendered him “unclean” and destined him to live as an outcast.

Then one day, he heard there was a prophet in Israel who could heal leprosy. So Naaman sought him out, laden with gifts.

When he found him, he waited with his horses and chariot at the prophet’s door. But Elisha the prophet didn’t even come out of his home. He simply relayed a message saying that the leper should go and wash seven times in the Jordan River and that he would be healed.

Naaman expected that the prophet would at least do him the honor of coming out to greet him, and then wave his regal hand over him in the name of God. Instead, Naaman was told to go bathe in a dirty little river. He was outraged at such stupidity, and angrily rode off on his high horse.

Then his servants reasoned with him and said that if the prophet had told him to do some great thing, he would have done it to be healed. Why not do this simple thing? He had nothing to lose but his dignity. So, having no other course, this proud warrior humbled himself and waded into that dirty little river and bobbed up and down seven times like a rubber ducky.

On the sixth time he went down into the water as a leper, but when he came up after the seventh, we are informed that his skin was like that of a little child. Once again, we see God, in His great consistency, using a foolish and humbling principle.

The Bible tells us that this same principle was used in the redemption of humanity. It says that the message of the cross “is foolishness to those who are perishing.”

As Bill Maher said, “This guy performed a sacrifice here a thousand million years ago. It’s like, ‘Who cares?’” The cross makes no sense until another missing puzzle piece comes into play. What is the piece that will make a baffled sinner see the whole picture? It is the Moral Law of God. When the Ten Commandments are placed into their rightful position, the gospel is no longer a mystery; as we recognize our sinfulness before a holy God, we see our need for a Savior. The Law becomes our “tutor” to bring us to Christ.

Think of it: Adam and Eve, Noah’s ark, Jonah and the whale, etc., were all genuine events, placed in the Bible to ensnare the proud in their craftiness. How wonderful of God to turn the line around. I really don’t mind being considered a child, because Jesus said that was the only way anyone could enter heaven. Again, Bill Maher’s attitude—“the people who think God wrote a book called The Bible are just childish. Religion is so childish”—is predictable.

Here are additional pieces of evidence for the supernatural origin of the Bible, for you to consider:

1. It is unique in its continuity. If just 10 people today were picked who were from the same place, born around the same time, spoke the same language, and made about the same amount of money, and were asked to write on just one controversial subject, they would have trouble agreeing with each other. But the Bible stands alone. It was written over a period of 1,600 years by more than 40 writers from all walks of life. Some were fishermen; some were politicians. Others were generals or kings, shepherds or historians. They were from three different continents, and wrote in three different languages. They wrote on hundreds of controversial subjects yet they wrote with agreement and harmony. They wrote in dungeons, in temples, on beaches, and on hillsides, during peacetime and during war. Yet their words sound like they came from the same source. So even though 10 people today couldn’t write on one controversial subject and agree, God picked 40 different people to write the Bible—and it has stood the test of time.

2. It is unique in its circulation. The invention of the printing press in 1450 made it possible to print books in large quantities. The first book printed was the Bible. Since then, it has been read by more people and printed more times than any other book in history. By 1930, over one billion Bibles had been distributed by Bible societies around the world. By 1977, Bible societies alone were printing over 200 million Bibles each year, and this doesn’t include the rest of the Bible publishing companies. No one who is interested in knowing the truth can ignore such an important book.

3. It is unique in its translation. The Bible has been translated into over 1,400 languages. No other book even comes close.

4. It is unique in its survival. In ancient times, books were copied by hand onto manuscripts that were made from parchment and would decay over time. Ancient books are available today only because someone made copies of the originals to preserve them. For example, the original writings of Julius Caesar are no longer around. We know what he wrote only by the copies we have. Only 10 copies still exist, and they were made 1,000 years after he died. Only 600 copies of Homer’s The Iliad exist, made 1,300 years after the originals were written. No other book has as many copies of the ancient manuscripts as the Bible. In fact, there are over 24,000 copies of New Testament manuscripts, some from within 35 years of the writer’s death.

5. It is unique in withstanding attack. No other book has been so attacked throughout history as the Bible. In A.D. 300 the Roman emperor Diocletian ordered every Bible burned because he thought that by destroying the Scriptures he could destroy Christianity. Anyone caught with a Bible would be executed. But just 25 years later, the Roman emperor Constantine ordered that 50 perfect copies of the Bible be made at government expense. The French philosopher Voltaire, a skeptic who destroyed the faith of many people, boasted that within 100 years of his death, the Bible would disappear from the face of the earth. Voltaire died in 1728, but the Bible lives on. The irony of history is that 50 years after his death, the Geneva Bible Society moved into his former house and used his printing presses to print thousands of Bibles. The Bible has also survived criticism. No book has been more attacked for its accuracy. And yet archeologists are proving every year that the Bible’s detailed descriptions of historic events are correct.

There is one more piece of the puzzle: the Scriptures tell us that the “natural man” cannot understand the things of the Spirit of God. While the above information may help to convince you intellectually of the inspiration of the Bible, you need more than that to understand it. Most Americans would find it difficult to understand the Chinese language. However, a child who is born into a Chinese family can understand every word. That’s why you must be born again with God’s Spirit living within you. The moment you become part of God’s family, the Scriptures will come alive and begin to make sense.

Heaven ExplainED: The Eternal Empire of the Son of Man
Randy Alcorn

What Do We Do Now?
Andrew Schwab