Haiti Rises from the Rubble 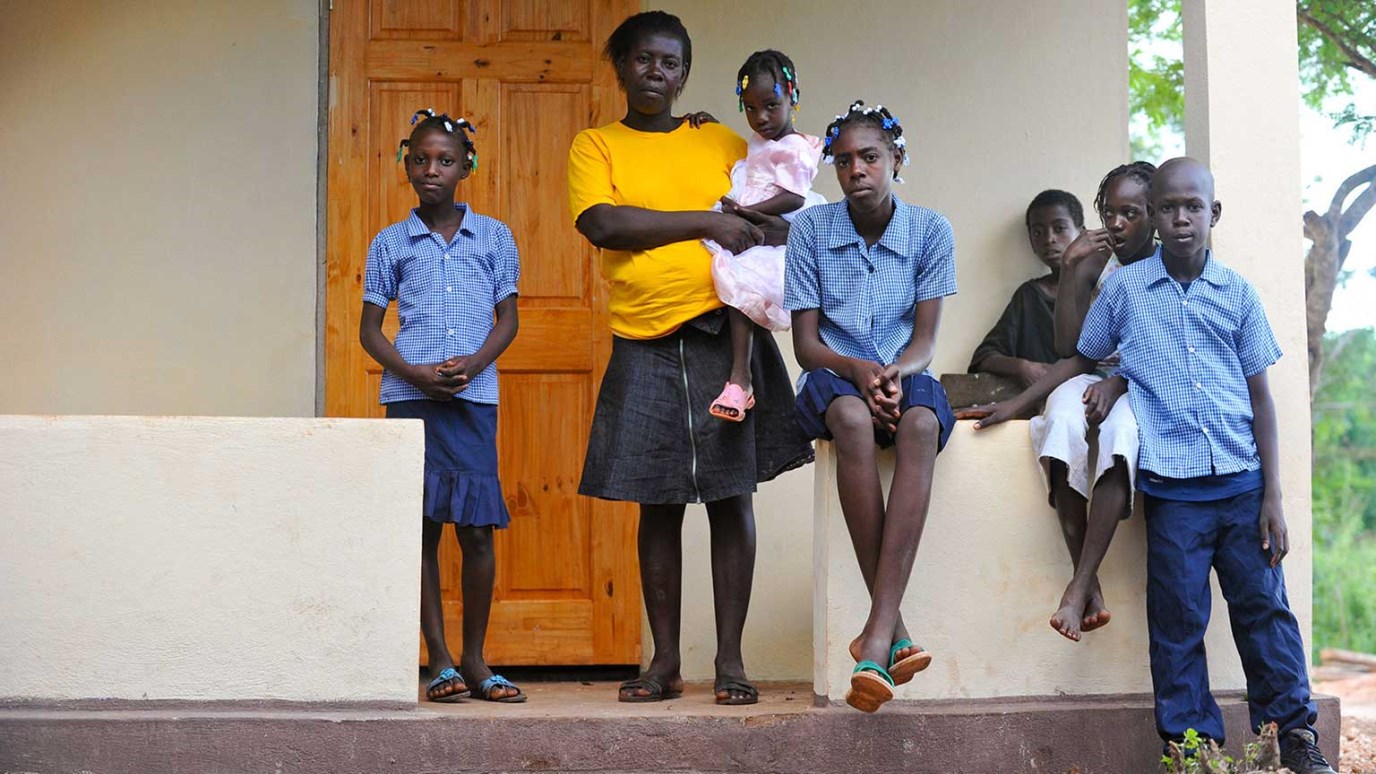 Four years after the Haiti earthquake, the country still struggles, but signs of hope spring up.

The earthquake that rocked Haiti on Jan. 12, 2010, left hundreds of thousands dead or injured, 1.5 million homeless, and the Caribbean nation’s capital buried in rubble. Sound housing and new opportunities for education are making life better for Haitian children who benefit from World Vision programs.

Haiti’s recovery from the 2010 earthquake has been slow, in part because life was already grim for millions of Haitians before the quake. Four in 10 adults are unemployed. One in three children under age 5 suffers from chronic malnutrition.

World Vision works in 80 communities in Haiti, equipping 58,000 sponsored children and their families with the resources to be healthy, educated, protected, and know God’s love.

For one single mother and her five children, sponsors have made a big difference.

Jean Menela, 28, formerly lived with her children in a rickety hut built of plastic, branches, and metal sheets. Like many Haitian women, Jean learned the hard way that dropping out of school often leads to early motherhood and limited prospects, especially when the children’s father runs away. She regularly reminds her three daughters that their priority is education. “If they don’t prevent themselves getting involved with boys, they end up in my situation,” she says.

Her resolve grew out of World Vision’s work to convince parents that their children need to be educated. These messages became especially important after 2010. “Post-earthquake Haiti has been challenged with a new set of problems with a high percentage of children who are not going to school,” says Valerie Noisette, head of education for World Vision. “If we don’t focus on educating young people, we will not see any change in Haiti.”

Child sponsorship allows Jean’s four school-age children to study. Caroline, 10, and Wifmy, 11, both want to become teachers. Their sister, 14-year-old Lovenie, says, “I want to live in a beautiful country where all children can go to school.”

Thanks to child sponsorship, Jean and her children have a new home — one that doesn't roast in the sun and flood in the rain. Jean calls the gift “a miracle.”

Jean also participates in a mothers club, where she learns about health, hygiene, and nutrition. “We talk about how we can support each other and make sure our children stay in school,” Jean says. “And how if they don’t, this is a failure not just for themselves, but for our community and for our country.”

Just a few years ago, less than half of Haiti’s elementary-age students were in the classroom.

Today, elementary school attendance has climbed to 77 percent as communities embrace education for children—with mothers like Jean leading the way.

Too Good To Be True?
Danielle Strickland
Follow Us
Grow Daily with Unlimited Content
Uninterrupted Ad-Free Experience
Watch a Christian or Family Movie Every Month for Free
Early and Exclusive Access to Christian Resources
Feel the Heart of Worship with Weekly Worship Radio
Become a Member
No Thanks