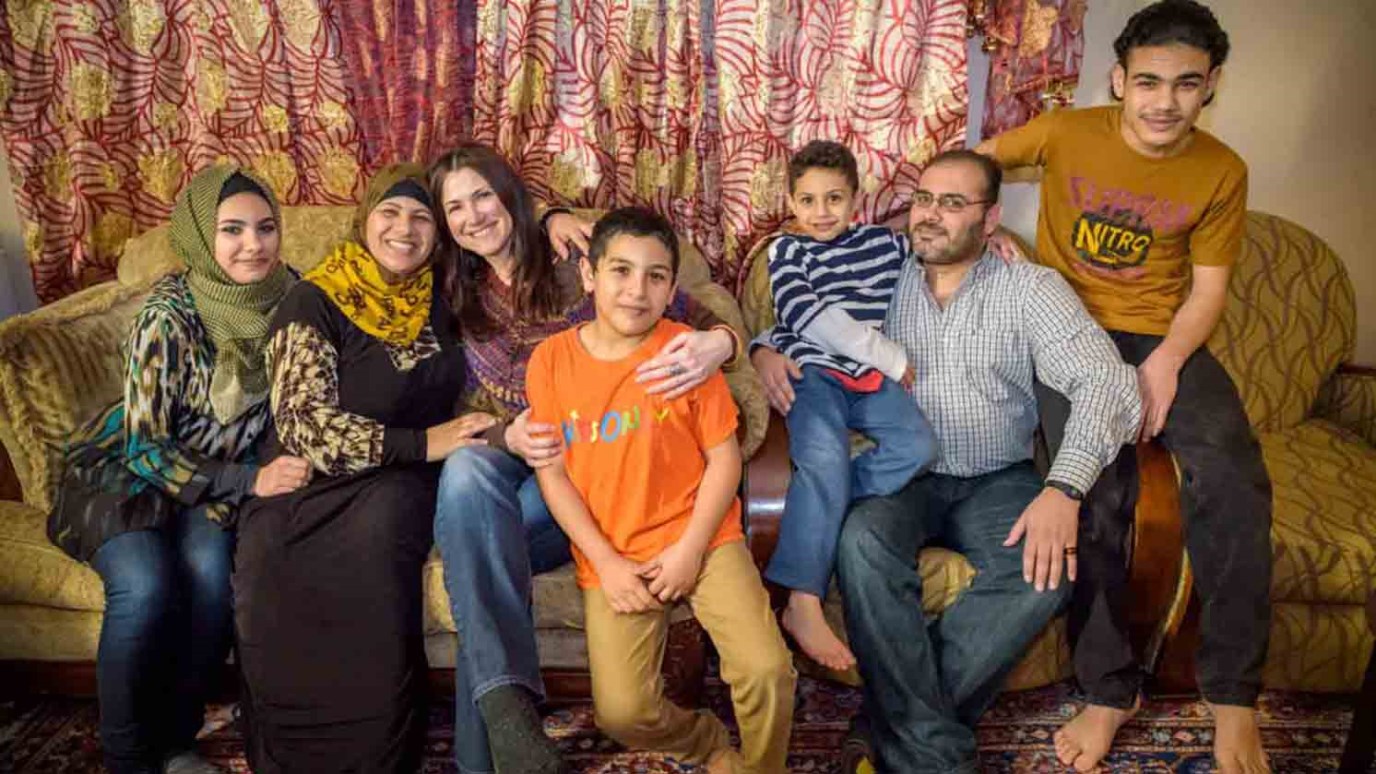 Cari Conklin, third from left, struck up a friendship with the Alhamden family that has changed her life and theirs.

Six years ago, software programmer Cari Conklin was recovering from a ski-accident brain injury, watching her marriage disintegrate, and wondering what had happened to the meaningful life she’d dreamed of.

“I was consumed with my own problems and had no capacity to consider what else was going on the world,” she says.

At the same time, in Daraa, Syria, the Alhamden family’s settled life was also changing as civil unrest led to government crackdowns.

“We wouldn’t have food for weeks,” says Rabah, the mother. “There was no power. No utilities. No bread. Sometimes we would eat the [food] for the animals.” But worse was the ever-present fear of death. “We couldn’t sleep because of the airstrikes,” she says. “The kids would cry every day.”

In January 2013, the family made the difficult decision to go to Jordan — just a few miles away.

After living in the village, with fresh air and a garden teeming with vegetables and fruit trees surrounded by the cactus fence, Jordan’s Za’atari refugee camp — bulging with 80,000 people, no electricity, and no opportunity — was a nightmare. It was so bad, they decided to return to Syria. The even gave away all their possessions because they were going home.

Those plans and hopes came to nothing: their home village was bombed, leaving nothing for them to return to.

“A week later,” says Bassam, the fathr, “we were asked [by the United Nations] if we wanted to go to a foreign country.”

Bassam went quiet. “I was shocked.” He said yes. The UN caller could not tell him which country they would be going to, but Bassam knew that anyplace was better than the refugee camp.

Then began 18 months of interviews, each lasting five hours. Everyone in the family would be interviewed numerous times to ensure their stories corroborated.

“I went to city hall to see the results,” says Bassam. “They post the results — pending, refused, or accepted.”

Bassam’s family was accepted. They learned they would be moving to the United States. A month later, the family went through a four-day orientation about American culture, especially how to get by at the airport.

After a long flight from Jordan through New York and Chicago, in November 2015, they arrived in Seattle.

Cari Conklin was waiting for them at the airport. She’s found new meaning in her life in responding to the greatest humanitarian crisis of our time – the Syrian refugee crisis.

“Welcome Home Refugees — Washington State,” a Facebook page she started with her Syrian friend Methal, now has 1,700 followers. She continues to volunteer for World Vision as a Child Ambassador and a Refugee Responder.

“What World Vision is doing in and around Syria is literally keeping people from starvation,” says Cari. “If there was anything I could give by waving a magic wand or performing a miracle beyond bringing peace to Syria,” she says, “it would be scaling the efforts and ability of World Vision to do what we do best — which is feeding the hungry, clothing the naked, [and more].”