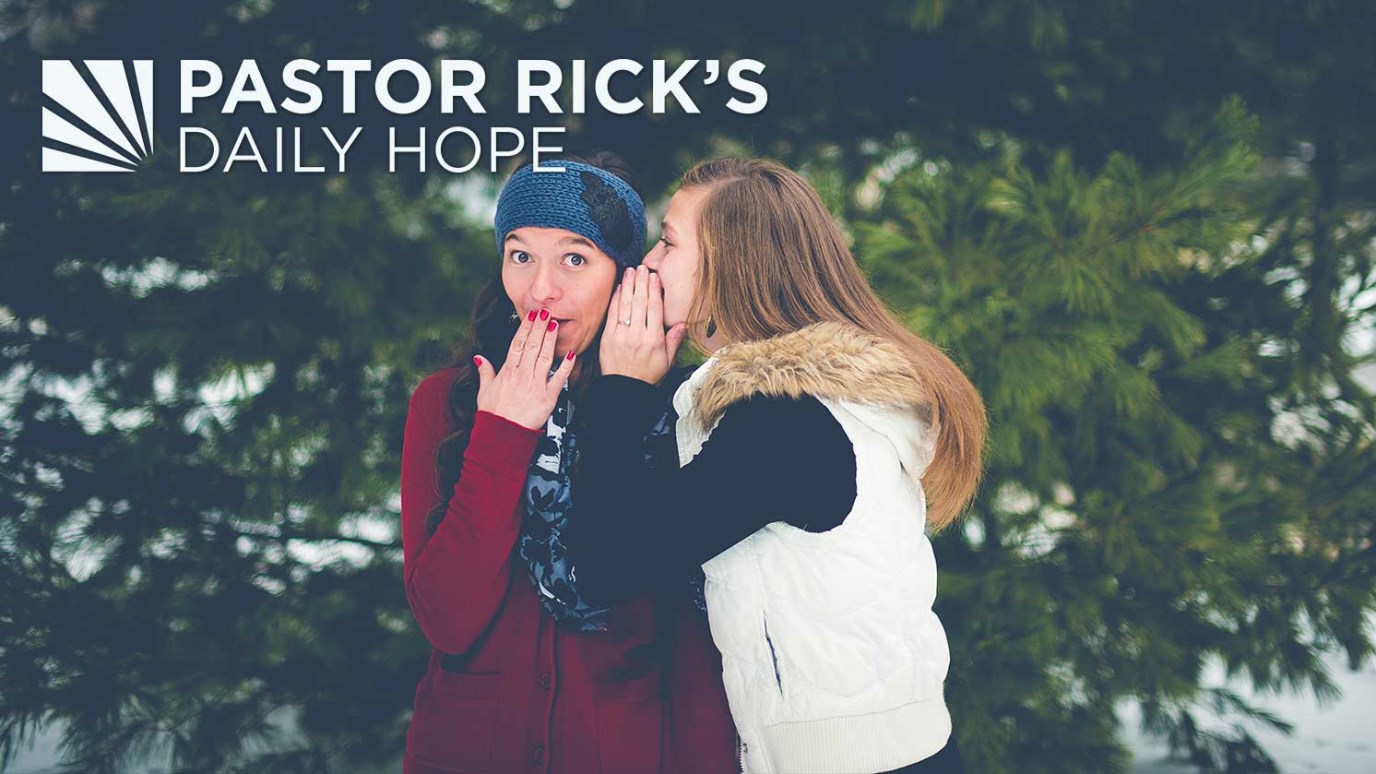 God puts gossip on the list with other sins like sexual immorality and murder because it is so destructive to relationships.

“A gossip betrays a confidence, but a trustworthy person keeps a secret” (Proverbs 11:13 NIV).

We tend to think of gossip as one of those “little” sins. But when God talks about gossip, he puts it on the list with things like sexual immorality and murder. Why? Because it is so destructive to relationships. Gossip can tear apart friendships, families, and churches.

Gossip is talking about a situation with somebody who is neither a part of the problem nor a part of the solution. If we’re honest, what we’re doing is making ourselves feel a little more important at somebody else’s expense. We’re talking about their hurts and their problems to make us feel like we’re morally superior to them. That’s the danger and the hurt of gossip.

There’s a story in the Old Testament about a family that struggled with gossip. Moses had a sister named Miriam who one day got caught up in gossiping about Moses among the rest of the people. God called Moses and Miriam in and had a little talk. He spoke with Miriam and told her what she’d done wrong—and right there on the spot, God gave her leprosy. You may be thinking, “That sounds terrible, but I’d like that to happen to the person who gossiped about me. Maybe not leprosy—but a really bad stomach flu, so that person knows how much this hurt.”

Do you know what God did next? He invited Moses to pray for Miriam’s healing—the person who gossiped against him.

Maybe you’ve been deeply hurt by gossip and things that have been said around the office or by the broken confidence of a friend or family member. Here’s what God says to you: “Pray for the person who gossiped against you so that you can be released from the hurt in your life.”

Or maybe you’ve been the one gossiping. This story is in the Old Testament to remind us how serious gossip is and how hurtful it can be to people, whatever side of it you’re on.

Keeping confidences enables you to connect to others in productive, healthy, and genuine ways.

Proverbs 11:13 says, “A gossip betrays a confidence, but a trustworthy person keeps a secret” (NIV).

Are you the kind of person that keeps people’s confidences so they can trust you?

Think of someone who has gossiped about you. How do you think God wants you to pray specifically for that person?

What do you normally do when people around you start to gossip? How closely does that align with the way God might want you to react?

Why does being a trustworthy person help deepen your relationships?

Humility Is the Path to Happiness
Pastor Rick Warren

God Will Wait on You Before the Miracle
Pastor Rick Warren

Learn How to Clarify Your Worldview
Pastor Rick Warren

Did You Know Worry Is Optional?
Pastor Rick Warren
Follow Us
Grow Daily with Unlimited Content
Uninterrupted Ad-Free Experience
Watch a Christian or Family Movie Every Month for Free
Early and Exclusive Access to Christian Resources
Feel the Heart of Worship with Weekly Worship Radio
Become a Member
No Thanks