Do I Really Have to Sit with my Child on the Plane? 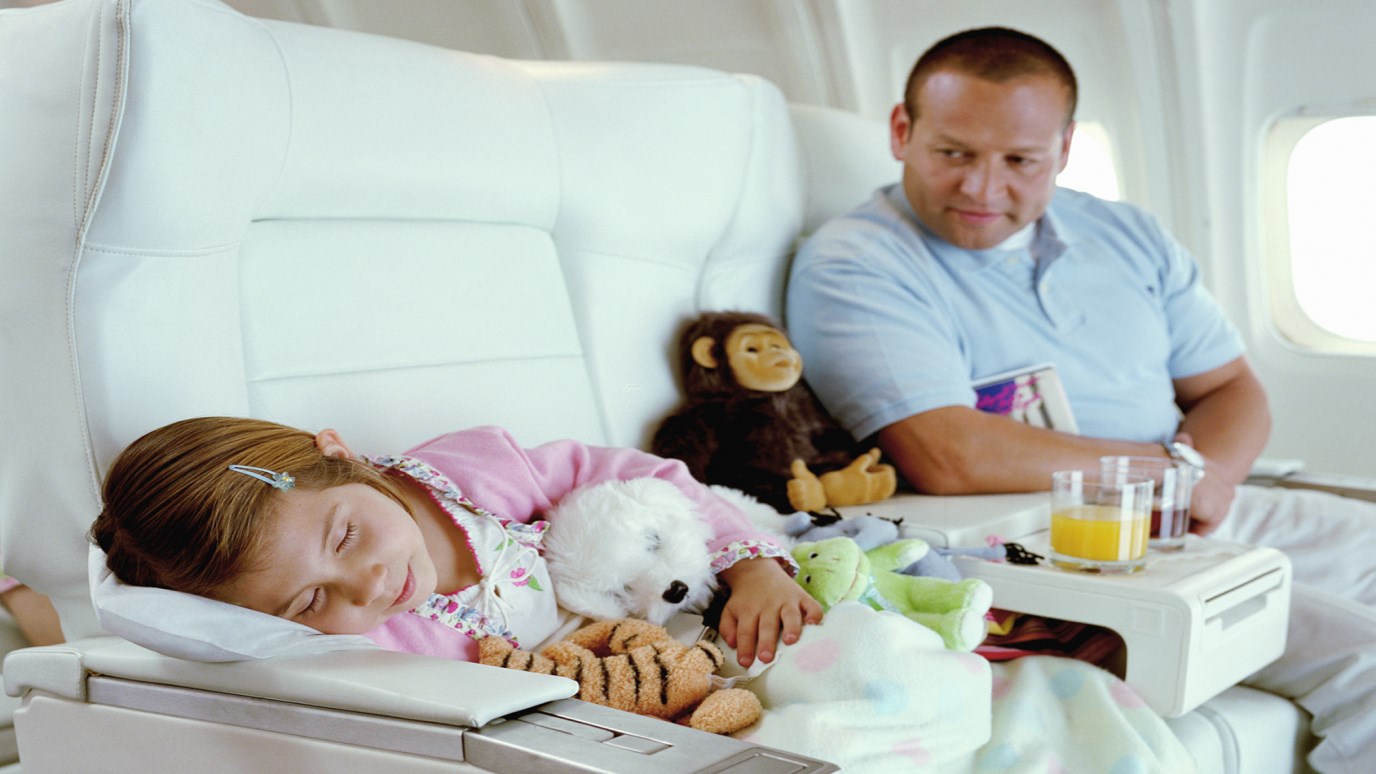 When traveling with kids it's best to lower your expectations, wear something that doesn’t stain, and give thanks for the Wright brothers. Darcy Kimmel explains why.

Now, don’t try to tell me you’ve never had this thought because I know you have. Depositing your sticky, squirmy, screaming sweetheart in seat 10B while you continue on to seat 27D. Believe me, if we could get away with it all of us would have considered this option.

Traveling with kids not only tests your patience and the patience of everyone within a three-state area, but your gag threshold and creativity level as well. I don’t know what people did to get across the country before airplanes were invented.

Can you imagine the conversation in the covered wagon?

“See how many Indians you can spot on the horizon.”

“You’ll have to hold it until we get down this mountain.”

“Well, we all are. Keep your eye out for a rabbit or squirrel.”

Nowadays, a three-hour airplane ride can resemble Dante’s Inferno, two hours of Storage Wars, and getting your gums scraped all wrapped into one. In other words, hell at 32,000 feet for some parents.

With four kids and a husband who travels all the time, I have experienced my share of the nether world on airplanes and I’ve learned a few things along the way. So here are my tips for travelling with your kids while seated next to them!

1. Think of the worst case scenario and then plan for something 3X worse. Take 3X the diapers, food, activities, clothes and patience than you think you could ever need. Believe me you’ll need them.

2. If they’re old enough, give them a pre-boarding pep talk. In other words, any bribe, threat or plea you think might give you an extra ounce of authority or sympathy. Getting down on your knees in front of these people is not that bad. You’ll probably never see them again anyway.

3.  Try to be the last ones on the plane. Yes, I know they like to pre board families with children, but that is actually a sinister ploy by the gate agents to get rid of the little darlings and hand them over to the flight attendants as soon as possible.

4. Apologize in advance to the coach section. Everyone beyond the curtain will be affected one way or another by your children. You might as well say you’re sorry to all the unlucky passengers, not just the ones nearby who will get apple juice spilled on them, pick up and return the same toy 50 times, stand to let you out at least 10 times to go to the restroom with your potty training 3 year old or your prolific diapered child. The guy in front of you will have a completely different hairstyle when he walks off the plane and will be calling to schedule an appt. with his chiropractor to get the kinks out of his neck from your child kicking the back of his seat.

5. Plan on carrying your child(ren) off the plane because two minutes before you land, all of the extra whining, crying, fidgeting, eating and kicking will catch up with them and they will finally fall asleep.

6. Try not to strangle the person meeting you when they say, “Look at that little sleeping angel. It looks like you had a great flight”.

These might not be your standard travelling tips but believe me they are the realistic ones.

When traveling with children it is best to lower your expectations, wear something that doesn’t stain, and give thanks for the Wright brothers because you’ll be there in three hours instead of next Spring.

Time Is Our Currency
Christi Simpson