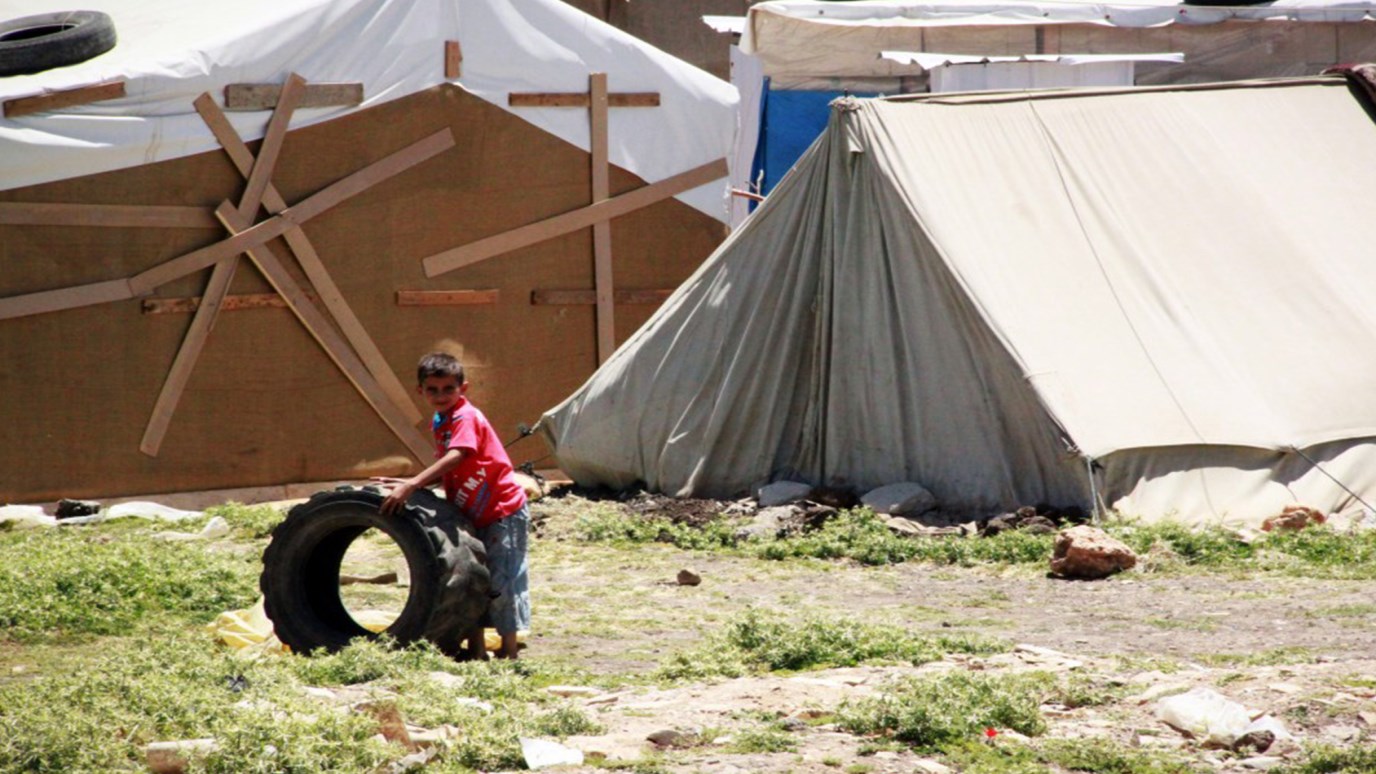 Syria's civil war has left more than 4.25 million people displaced—please pray for them.

A Syrian boy plays with a tire at a temporary refugee settlement in Lebanon.

Please pray with us for needs in the Middle East. World Vision works in Jerusalem/West Bank/Gaza, Lebanon, Jordan, Pakistan, and Afghanistan, and is responding to the Syrian refugee crisis.

Nearly 170 Palestinians and six Israelis died during an escalation of violence in November 2012. Buildings and livelihoods were destroyed. One Palestinian child sponsored through World Vision in Rafah was killed. Other sponsored children lost loved ones or their homes and are suffering severe psychological distress. —

Lord, You are sovereign. Help Palestinians and Israelis alike find comfort in You during tense times. Empower families and aid workers in Gaza to rebuild and provide a safe, nurturing environment for children. We pray for Your peace to reign in all Israeli and Palestinian communities.

The Syrian people have suffered through more than two years of civil war, which threatens to destabilize the entire region. The conflict has killed more than 100,000 people, devastated homes and livelihoods, and displaced 4.25 million internally. Concerns are growing for the younger generation, which could be lost to bitterness and illiteracy as the war deprives displaced and refugee children of education, secure homes, and family ties.

Jesus, we trust in Your unfailing love. We pray specifically that you will protect children exposed to unimaginable violence. Bring about opportunities for them to learn and study. Strengthen their bonds with family and friends to maintain steady relationships at this crucial time.

Nearly 700,000 Syrians have fled the war to Lebanon; more than 500,000 are in Jordan; and others have fled to Turkey, Iraq, Egypt, and elsewhere. The influx of people with few or no resources has severely stressed infrastructure and increased tensions between refugees and host communities. Schools and basic social services are at their breaking point as they try to accommodate the growing population.

Heavenly Father, bless host communities as they show compassion and hospitality to Syrian refugees. Also, give them grace and patience, and keep their hearts soft as they deal with the challenges of a drastically increased population.

About 128,000 Afghan children younger than 5 died in 2011 alone. Nearly 60 percent of the remaining children that age are malnourished. World Vision trains midwives to provide skilled assistance during pregnancy and birth, helping reduce maternal and newborn deaths. It also equips health workers to train community members on disease prevention and hygiene and to improve nutrition through methods like exclusive breastfeeding.

Lord, the numbers are overwhelming. Yet, we know You desire every person to experience life in all its fullness (John 10:10). Please equip even more midwives and skilled medical workers so mothers can feed their families well and raise their children in good health.

Pray for improved education in Pakistan.

Just 35 percent of boys and 29 percent of girls attend secondary school in Pakistan. Subsequently, literacy is low—79 percent and 61 percent, respectively, for men and women ages 15 to 24. World Vision has helped rebuild Pakistani schools destroyed during conflict, train hundreds of teachers to be more effective and engaging, and empower community leaders to invest more time and resources in their local schools.

Heavenly Father, most of us take basic education for granted, but this provision is not a given in many parts of the world. Guide Pakistani leaders as they create educational policies and systems to include every child. Help newly trained teachers develop engaging lessons, and give children and families the strength and resources to overcome barriers to continue attending classes.