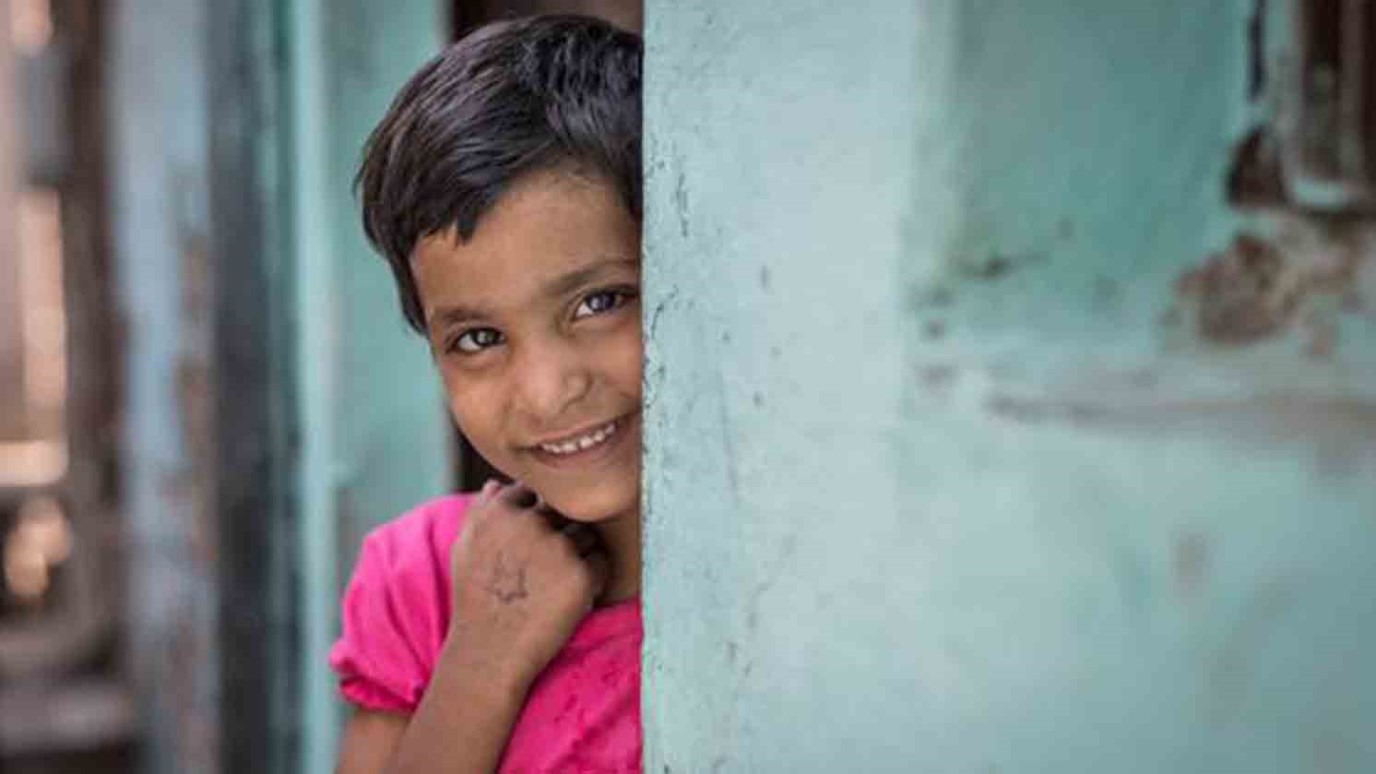 Five-year-old Kashish is one of her parents’ four young daughters in Agra, India.

It’s just after 2 p.m., and the girls, Kashish, 5, and Ani, 4, have finished their class at the anganwadi children’s center.Too young to be in school, their options for the afternoon are to play near their mother’s cart as traffic whizzes by or play at home, where there’s no supervision.

They live in a rented space on the second floor of a house — a small, bright blue room where the family of six sleeps together on one bed, along with concrete outdoor space for cooking.

Vinod moved from Ganjapur, Rajasthan, in 2002 in hope of finding a better job. He worked as a mason there, and Agra’s shoemaking industry held the promise of better work and higher wages. He splits his time at two shoemaking factories and earns between 50 to 200 rupees a day (US 75 cents to $3).

Solenka, 31, grew up just 20 minutes from Nagla Mohan in a slightly more affluent family. Her uncle arranged her marriage to Vinod when she was 20, and she joined her husband in Agra.

The marriage was a “difficult adjustment for me,” says Solenka. “When I was growing up, I was unlimited. But then I had to run a house on little [money] — I went from a lot to a little.”

Their financial troubles multiplied with each daughter they had. Though their four girls are still young — only the eldest, 11-year-old Kamya, is old enough to be in school — Vinod and Solenka already worry about the four dowries they’ll be responsible for.

“As soon as a girl is born, you think about a dowry,” says Solenka. “Society thinks girls are a burden.”

For poor families, the looming reality of a dowry when a daughter is born can be especially daunting, but parents of all socioeconomic backgrounds spend years saving up for the jewelry, cash, household items, and even motorbikes they’re expected to give to their son-in-law’s family before a marriage takes place.

It’s one on a list of social and economic reasons why many families across India prefer sons over daughters, who are sometimes seen as burdens who don’t contribute financially to the household. This cultural belief can lead to child marriage — once a girl is married off, there is one less mouth to feed.

Vinod and Solenka had a son, born after eldest daughter Kamya. The baby lived eight days before he died of pneumonia.

“My mother-in-law thinks we should keep trying to have a son,” says Solenka, but each pregnancy has left her weaker. “In Indian society, there is a drive to have a boy.”

Like millions of parents across the globe, the couple does what they have to do to provide for their children.

Now, their children’s needs are met — but that wasn’t always the case. Before Solenka was earning income with a pushcart, they couldn’t afford nutritious food for their daughters. When Kashish was 2 and a half, she became malnourished and was put on a feeding plan at the anganwadi to get her to a healthy weight.

It’s hard to imagine the playful 5-year-old was once listless and lethargic. Her personality perked up once she gained weight and her mother learned to cook more nutritious food, like the green vegetables she now adds to most meals.

Kashish now bounds around the neighborhood, full of energy and curiosity. She skips down the concrete paths of Nagla Mohan toward the busy street where Solenka stands with her pushcart.

Growing up watching her mother work — outside of their house, interacting with customers, and making any money she can — models for Kashish a different life, one where she can make her own decisions instead of following society’s expectations of what girls should be.