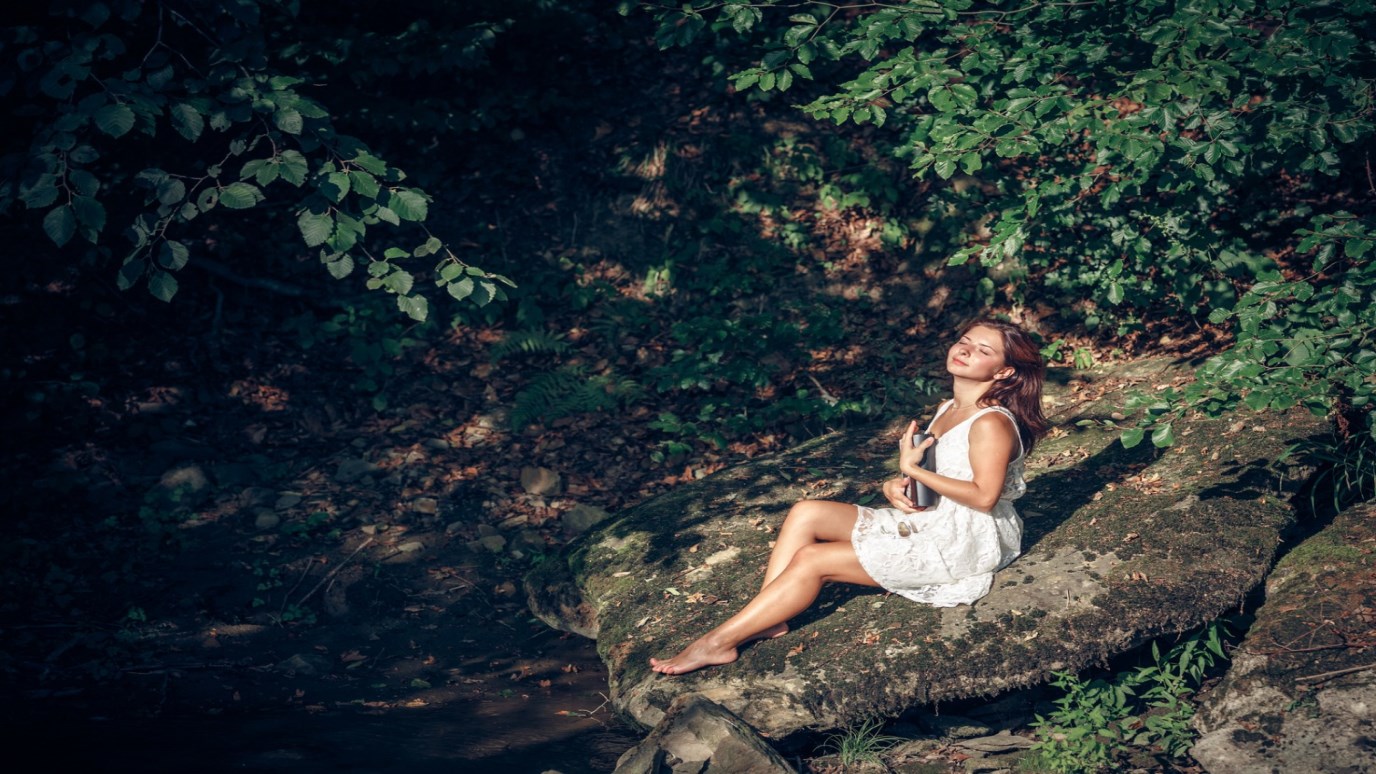 Dee Brestin shares how we can overcome our self-centered preoccupations and discover a fresh definition of God's grace.

I am characteristically absorbed in myself

In my own anxieties and concerns

I can tell myself to stop it but that is not effective...

What really helps me is seeing

The beauty of God...

...This shifts my mind from my self-centered preoccupation

To what matters most.

I cannot help but notice that there are women who constantly gaze on His beauty. Why do they do it? Their overwhelming desire is for God. They want Him desperately.

How do we gaze on His beauty?

A.W. Tozer says it is where we go in our mind. . .continually through the day. The following are ways to set our mind on Him:

It’s all around us—so it is a matter of being alert and giving thanks.

This last week, I returned to my cabin. As I ride down through the woods toward the water, the knots in my neck disappear. This place always lifts my soul beyond my self-preoccupation to think about our magnificent God. My son, J. R. and his fiance Dianne came, and he helped me get some footage for the curriculum on Idol Lies. I often think of Ann Voskamp’s quote “My camera is a hammer” — how hammering one nail (seeing and thanking) can drive out another (not seeing or thanking.) J. R. ‘s camera was a hammer.

The second night there was a gorgeous sunset, but we didn't realize until later that it was an extremely rare solar eclipse. We could see it better on the film. Do you see how the moon has eclipsed the sun? How can you see this and not have your heart quickened? He is Lord of all!

His Presence (in Suffering)

J. R. suggested I go down to the beach before the sun disappeared, so he could get me walking in front of what we still thought was simply a magnificent sunset. In my rush, my sandal caught on the steps between the deck and the beach, and I somersaulted onto the rocks. I knew I was in trouble. J. R. cried out and came running. Even in the midst of blood and pain, it was a comfort to see how deeply he cared—his tears, his prayers, his scooping me up to get me to the house. His fiance, Dianne, grabbed a package of frozen blueberries to hold on my goose egg, and off we drove to the Sturgeon Bay hospital for me to be stitched up. They prayed all the way. Though I was in distress, I also, through these two, sensed God’s care. I deserve nothing, but I sensed His calming presence. We suffer every day in small or big ways—but we must let that suffering draw us to Him, help us sense His presence. (And at least my fall was romantic — tumbling into the sunset...)

I also sensed His presence in the kindness of strangers…they see my battered face and go the extra mile—even the security agent who patted me down yesterday at the airport was especially gentle and soothing! Every time I hurt, it awakens me to how hard it is to be hurt, to be “poor,” to be vulnerable — and how much I need to sense Jesus through others—and I have!

His Power (When We Turn From Idols)

J. R. is my firstborn. I was twenty when he was born: a lost, spoiled, and foolish mother. Despite all that, God’s grace rescued us, and J. R. has grown into a godly man. However, before God awakened to me to my idol of control, I was continually trying to fix my adult children instead of simply praying and trusting God. J. R. and I often disagree, and sometimes the view from my Presbyterian perch seemed so very different from the view from his Pentecostal perch, even though we were looking at the same Lord and the same Gospel.

Continually, I wanted to show J. R. that my view was the right one and his was the wrong one! I did it openly and side-ways, for my control idol was very creative. This only led to hurt and withdrawal. But, in the last five years, as “The Stonecutter,”  has been chipping away at my control idol, I have been awakened to a new appreciation of this son and his perspective. We still often see things differently, but there is a new sweetness in our relationship. This is the power of God which can only be released when idols are replaced by Him.

How thankful I am for this restoration. Intimacy with my family and with my God. I think of what my friend Rebecca said, “Intimacy with God is like a stream—and I don’t like the rocks that get in the way.”

This week I have been convicted by His Word, but it is a good and beautiful piercing, awakening me from my default mode of self-preoccupation.  I was freshly reminded of how often I confine my Christianity to those who are closest to me—to those who affect me! But oh—that is not God’s heart for me. He wants me to bring His love not just to those who are close to me, but to those for whom His heart breaks. He cares for the oppressed, the lost—for those who like the Ninevites “do not know their right hand from their left.” (Jonah 4:11)

Something that has particularly awakened me is that so often we think of giving to the poor, the prisoner, the oppressed, and the lost as charity, which we might think as optional—but the Bible calls it JUSTICE. It is unjust to withhold; it is unjust to disobey God; it is unjust to shut up our compassion—all these are forms of sin. A fresh definition of sin, which Jonah so vividly illustrates, is running from God.

And we do too.

And a fresh definition of grace is God pursuing us, rescuing us from our self-destructive behavior.

Yes. That is what Jesus says. Perhaps the two most famous chapters are Matthew 25 (sheep and goats) and Isaiah 58.

I remember the first time I heard a sermon on Isaiah 58. It was from Greg Scharf (a pastor Renee and I were both blessed to have) who became John Stott’s backup preacher and is also the main preaching professor at Trinity. I was pierced by his exposition of Isaiah 58. When God speaks to your heart, there is a quickening, an awaking from the dead. It’s been thirty years, but I still remember Pastor Scharf’s words:

As evangelicals we often define Christianity in terms of private morality—when it is so much more. It is, among so many things, “to pour yourself out for the hungry and satisfy the desire of the afflicted…”  He said that it was hard for his wife and him to continually do this unless they had people move right in with them—that was the best way they knew to continually show hospitality to those in need.

That was the beginning of a journey of ongoing hospitality for Steve and me...to adoptions, to a different lifestyle. God in His grace rescued us through His Word from our self-destructive behavior. Yet I need continual rescuing, because I have what Martin Luther termed: “curvature of the soul.” I need to continually gaze on His beauty by being in the Word. Day in. Day out.

Here’s a quote from Generous Justice:

If you are a Christian, and you refrain from committing adultery or using profanity or missing church, but you don’t do the hard work of thinking through how to do justice in every area of life—you are failing to live justly and righteously.

Those words can make you feel guilt —but guilt is not an effective motivator. We may respond for a few days—but most likely, we just become immune. We would rather live with the dull ache than to truly and completely love—to forgive, to give, to love as He does.

So, what do we do? We must gaze on His beauty.

When I lost Steve, what helped me the most was to know that Christ loved us so much that He went all the way to the cross. I knew He understood the pain of being separated from the One He loved the most. I knew that, as the Man of Sorrows, He “sat shiva” with me.

Even this week, though this trial of feeling and looking like I’ve been in a prize fight, is a much smaller trial, the cross comforts me. I look in the mirror and see a face that looks like it has been beaten, and I think about Christ: “You looked much worse. You were beaten for me. You understand my pain and shame.” I know He understands and cares. That’s the beauty of my Savior. That’s what changes my heart and lifts me beyond my self-preoccupation to being His love in the world.

Down From the Mountain
Nancy DeMoss Wolgemuth