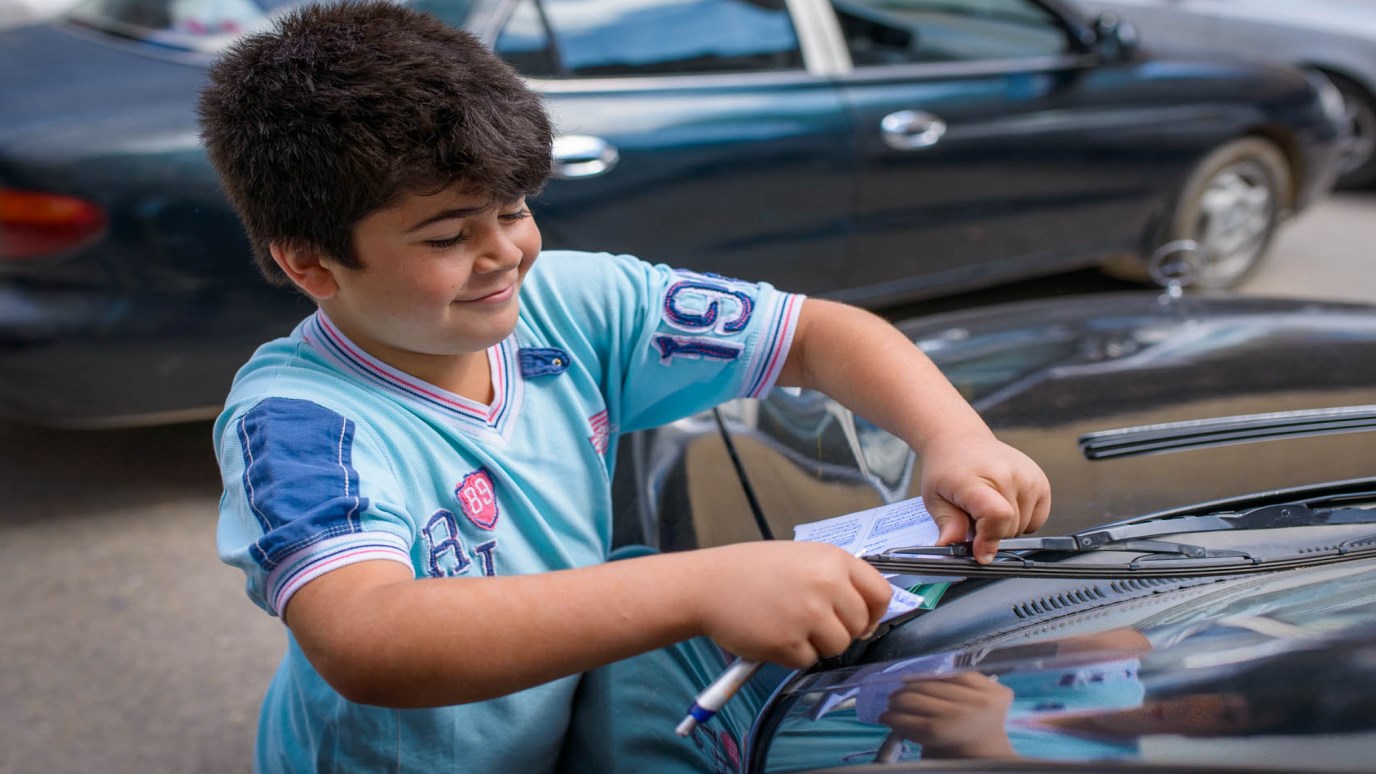 Ten-year-old Absi is one of many Syrian refugee children who work long hours for little pay to help support their families.

Absi, at the age of 10, is driven by destitution.

While others his age are in school, he works as a parking lot attendant in Irbid, Jordan. Across Jordan and Lebanon, a staggering number of Syrian refugee children have no choice but to work.

“Child labor is directly linked to the basic survival of refugee families,”says “The Future of Syria: Refugee Children in Crisis,” a report by the United Nations refugee agency.

The war tore Absi from his beloved father more than a year ago, forcing the child and the women of his family to escape fighting in their homeland. His father never made it out.

At Omerbenkhattab Street garage, Absi works with a team of drivers and attendants who valet vehicles for business owners and other people who need to stash their car away for the day or an hour. A rush of cars come and go, a non-stop symphony orchestrated by Absi’s flash of claim tickets. He’s working 10 to 12 hours a day, eking out two Jordanian dinars ($2.80) — just enough to buy bread for his family.

“Absi feels he has no choice but to work for his family,” says Ahmad Abboura, the 30-year-old owner of the garage. “I know how he feels; I was a child laborer, too, and worked in a garage at the same age as Absi. You feel you have no choice.”

Before leaving Syria, Absi vowed to himself to care for his mother and sister once they reached Jordan, where the family settled in a small apartment on the sixth floor of an abandoned building.

Leila al-Sakji, director of a World Vision-supported school for Syrian refugee children, comes to his home to check on him.

World Vision facilitates remedial classes in Irbid, allowing both Syrian and Jordanian children to access education — and make up for lost time. The aim is to equip them to return to school, reintegrating into the class levels appropriate to their ages.

“Absi has not been in school, where is Absi?” Leila asks his mother, Mariam.

“He is expected to return home any moment,” Mariam says.

Leila takes a seat on the cot on the floor. She will wait to see him.

“Our program is to prepare children to return to school, so we don’t lose our children to the streets,” she tells Mariam. “We don’t want children to drop out. They are little children. They need to be in school.”

Mariam agrees. “He says he has been going to school and working,” she says. “He wants to be the breadwinner, to pay for our bread. He doesn’t want to see me in pain. He’s my provider.”

Minutes pass before Absi walks in; his chest swells with pride and excitement as he hands his mother two paper bills.

Then, he spots Leila. He is hot, flushed, and now busted. He is silent and sits down across from Leila. He’s prepared to catch whatever comes his way.

“I hear you are working,” Leila says.

Her tone is more nurturing than threatening when she delivers her message: “You need to be in school, not work, Absi. The classes are to make up for the year’s lost time. What future will you have if do not go to school? School is where you need to be, for your future. What do you want to be when you grow up?”

After a long pause, Absi says: “I want to grow up to be a teacher.”

‘I will make you a deal’

At the garage where he works, staff hovers over the child like doting older brothers, each passing by to pat the helmet of hair on Absi’s head. They make sure he’s out of harm’s way and has enough water to drink. They also encourage him to go to school once they learn of his situation.

In a move that shocks Absi and his mother, Abboura, the garage owner, has an offer for the child: He’ll pay Absi his wages, plus a $1 raise, if he attends school. Absi accepts.

“He’s our little brother and a boy who reminds me of the possibilities — that there is a future, a better life, and we can be part of that for our children,” Abboura says. “If Absi does it, other children can, too.”

Sandals in the Snow
World Vision