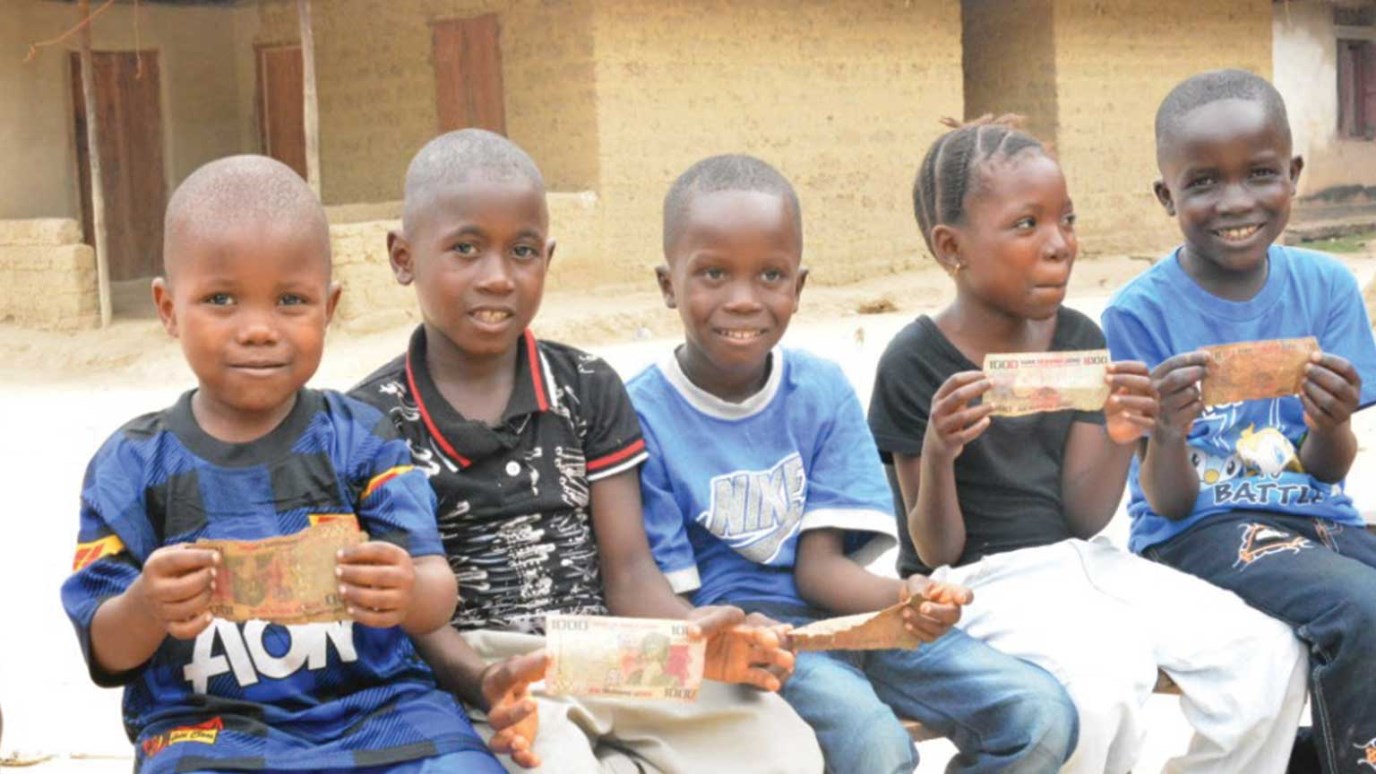 Five-year-old Mohamed (left) and fellow members of a children’s savings group in Sierra Leone pool their money to pay family and education expenses.

Mohamed Jabbie is an aspiring money manager and investor. This quietly confident child is helping his mother develop her wood products business with a loan from Destiny, the first children’s savings group in his community. Mohamed, a World Vision sponsored child, is a proud savings group member.

He and 24 of his young friends set up Destiny in Korigbondo, a small community of mud-walled homes in southeastern Sierra Leone.

At that time, up to 400 people per week were dying of Ebola across the country, according to World Health Organization records. Thankfully, no one died of Ebola in Korigbondo, although the broader Bo District registered 231 deaths.

Members of the Destiny Savings Group range from five to 18 years of age. They save together and can borrow small loans from the pooled funds. Members contribute 1,000 leones, about 20 cents U.S. weekly, which they receive from their parents. The children also invest small cash gifts from relatives into the group’s coffers. As of May 2015, they had saved 1.2 million leones (US $240), as well as an emergency fund of 150,000 leones (US $35). This is a substantial nest egg in a country where most people earn less than $2  a day, according to United Nations Development Program statistics.

Mohamed was the first group member to take a loan. “I borrowed 50,000 leones (US$13) and gave it to my mother to invest in her fruit and firewood trade so she can buy me books, pencils, uniforms, and a bag from her profits,” he says.

Mohamed and fellow savers take their membership in Destiny seriously. The group is governed by a constitution and run by an executive committee. Cash savings are safeguarded in a heavy wooden box equipped with a substantial padlock. Its three keys are held by three members to ensure security.

“We formed this group so we can help our parents by contributing to our own education,” says keyholder Fatmata Tucker.

Economically, Korigbondo and other rural communities were hit hard by the Ebola outbreak. When the Sierra Leone government declared a state of emergency in July 2014, public gatherings, including weekly farmers’ markets, were banned to help contain the virus. Farmers’ unsold produce rotted in storehouses and families’ incomes fell.

Even before the Ebola crisis, Sierra Leone was among the world’s poorest countries. The 2014 UN Development Program’s Human Development Index, which ranks countries, based on income, life expectancy, education and quality of life, placed Sierra Leone 183 out of 187 countries.