A Brighter Future Ahead 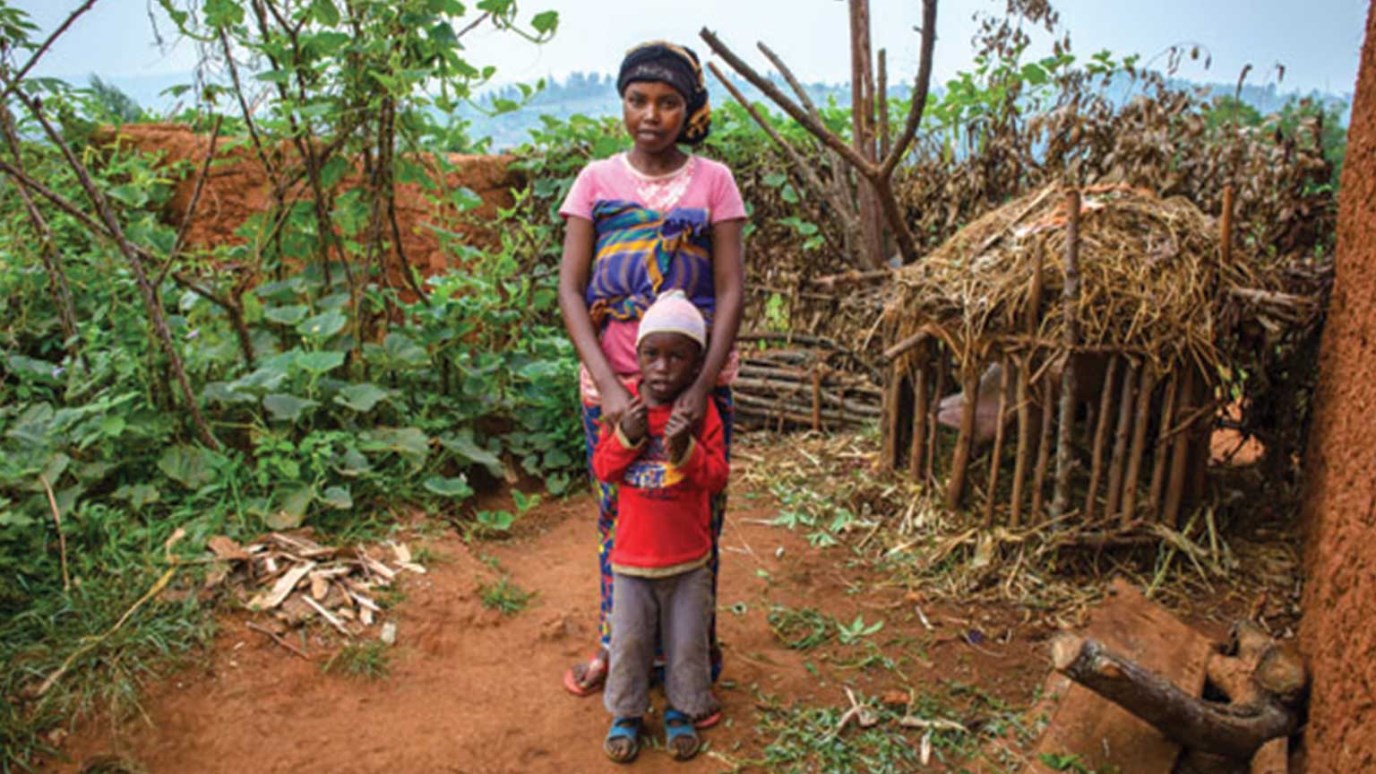 Gihozo, age 4, stands with his mother Kanyange at their home in Rwanda. Because Gihozo has been registered for a World Vision child sponsorship, he has a brighter future ahead.

Gihozo is only 4 years old, but he has to walk up to three hours a day alone to fetch dirty water for his family members, who struggle to provide enough food. But the future is looking brighter for him — he was recently registered for World Vision sponsorship!

World Vision’s Laura Reinhardt writes about meeting Gihozo and the hope she has for his future...

In January, my grandson turned 4. We met at a pizza parlor where gifts from family and friends covered one whole table. Everyone ate plenty of pizza and chocolate cake, and even then there were leftovers. He was giddy with all the excitement surrounding his special day.

A little over a month later, I met another 4-year-old boy, Gihozo. He lives in southern Rwanda with his two sisters, mom, and dad.

I’m sure that on Gihozo’s birthday there was no celebration. His family struggles just to survive.

I sat with Gihozo, his mother Kanyange, and Gihozo’s 15-month-old sister, Marie Grace. The dark house didn’t have windows, and the only light came in through a few slits in the walls and the front door.

Outside, rain pelted against the terra cotta house — claylike mud caked over wood poles and straw. A feeling of damp and cold pervaded the home.

In the back corner of the house where we sat, a thin straw mat provided the children’s bed. There was no padding, only dirt beneath them.

Despite her family’s living conditions, Kanyange was beginning to feel hope. World Vision has begun working in their community, and Gihozo has been registered for child sponsorship.

"My child may get a bright future," Kanyange said.

She doesn’t know exactly how bright it could be. But I do, having seen World Vision’s sponsorship program at work around the world.

Just inside the front door of Gihozo’s house, there was a small supply of beans. They needed to last the family of five for the next two days.

Kanyange said that sometimes Gihozo comes to her and says, “Mama, I’m hungry.” Baby Marie Grace doesn’t have words yet, but instead carries her empty plate to her mother in the hopes that food will magically appear.

“I get hurt,” Kanyange said. Any parent seeing their children going hungry would feel that same pain.

They own a very small plot of land, which Gihozo’s parents’ farm by hand. The meager food supply needs to be supplemented, so they work other people’s land, too, in an attempt to make money to buy more food. If there’s money left over, they purchase clothing and occasionally school supplies.

In my travels, I’ve seen sponsorship at work in neighboring Rwandan communities where families have received additional clothing and school supplies. That frees up the families’ income to buy more food.

Gihozo’s older sister, Ishimni Claude, 12, is able to go to school since she’s still in grade school. But that means that Gihozo is often left on his own throughout the day while his parents work.

When Ishimni is at school, Gihozo is in charge of gathering the water for the family. If Kanyange isn’t working in the field and gathers the water, it takes her about 30 minutes, but Gihozo’s little legs need an hour to walk the same path.

Being just 4 years old, he carries two tiny jerry cans with him to collect water. Because the cans are so small, he has to make the trip three times a day.

I tried to imagine my grandson, all alone, walking three hours every day and facing hazards such as animals, unscrupulous people, and treacherous terrain. It made my heart hurt.

After all that work, this water isn’t even safe to drink. Gihozo and his siblings have gotten sick from the dirt and germs hidden in the water. But it’s the only water they have.

However, earlier that week, I’d met staff members at the World Vision office who told me that they are working hard to bring a water pipeline into Gihozo’s community.

That will change his hour-long walk to get water to just ten minutes each way. And the water will be clean and safe so Gihozo and his sisters won’t get sick from waterborne illnesses anymore.

I listened to Kanyange describe her sorrows for her children when she and her husband have so little to offer. I imagined my grandchildren in Gihozo’s and Ishimni’s place and felt her despair.

But I was encouraged because I’ve seen that sponsorship works to lift children like Gihozo out of physical poverty and a poverty of spirit.

I’ve seen mothers receive education on how to create nutritional meals using local produce to make sure that their children reach their fifth birthdays and grow up strong and healthy.

I’ve also witnessed the results of parents who’ve attended business-training classes, which have helped them start their own businesses and provided a steady and more stable income.

When I think of Gihozo, I believe that he has a bright future ahead of him. I believe that sponsorship will allow him to grow up feeling as celebrated as my grandson did at his birthday party.